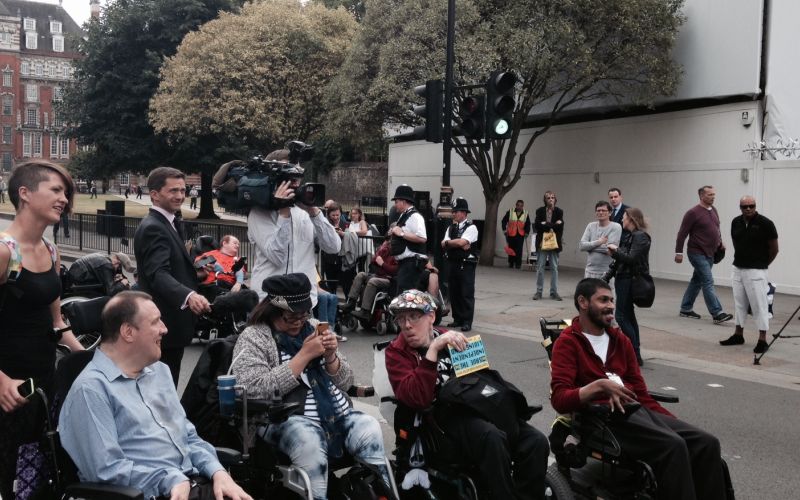 Disabled people who receive support through the Independent Living Fund (ILF) have been caused fear, stress and anxiety by the process leading to its closure, according to new research.

A seminar organised by the campaigning disabled peer Baroness [Jane] Campbell heard that ILF-users interviewed about the reassessments of their care needs they had been given by their local authorities said they had found the process bureaucratic, inflexible and unprofessional, compared with the empowering and flexible nature of ILF.

Introducing the seminar, Baroness Campbell said she was “not going to apologise for the disruption outside”, caused by a high-profile protest by Disabled People Against Cuts against the ILF closure (pictured).

She said: “It gives this day even more meaning, I think. We have the deadline of the closure of the ILF at the end of the month, and we have people outside who have come to demonstrate their frustration and anger over their reducing care packages.”

The fund – which helps nearly 17,000 disabled people with the highest support needs to live independently – is due to close on Tuesday (30 June).

The Department for Work and Pensions has promised to transfer one year’s worth of non-ring-fenced ILF funding to councils in England, and to devolved governments in Wales and Scotland.

Dr Tom Shakespeare, a leading disabled academic and now senior lecturer in medical sociology at the University of East Anglia (UEA), told the seminar at the House of Lords that the research showed local authorities appeared to have a “very minimalistic interpretation of independent living principles”.

He said that the uncertainty and bureaucracy of the transition process were causing “fear, stress and anxiety” among ILF-users.

His team carried out in-depth interviews with 12 ILF-users with physical impairments – across six local authorities in Greater London and East Anglia – earlier this year, and only one of them said they had found the re-assessment process by their local authority to be a positive experience.

One said the council assessor had treated them as if they were stupid, while another said their local authority had been “not very professional”.

When asked how they felt about the assessment, one said: “Can I use the word ‘crap’? Because crap is how it makes you feel… crap.”

One ILF-user said: “It is not fear of change but my fear is people haven’t really thought it through.

“They are asking us to give up something without really knowing what is in its place.”

Another said there was a “vagueness” about the reassessment process.

Shakespeare said of the 12 people who agreed to be interviewed: “They do recognise there are budgetary restraints but they feel their needs and rights to participate will not be respected.”

Only one of the 12 said he was not worried about what would happen to his support package as a result of the ILF closure and being reassessed by his local authority.

Sue Bott, deputy chief executive of Disability Rights UK, told the seminar: “For people with high support needs, what we need is a national system, because a local system just doesn’t work.

“Local authority budgets just cannot cope with the differences in numbers of people with high support needs in their area.”

The research was funded by the Economic and Social Research Council (ESRC), with support from the user-led organisations Independent Living Alternatives and Equal Lives.

The research adds to evidence compiled by Disability News Service (DNS) of delays to the transition process and cuts to people’s care packages, with many ILF-recipients yet to be informed by their local authority how much support they will receive once the fund closes next week.

Last week, the Association of Directors of Adult Social Services (ADASS) admitted to DNS that there were problems with the transition process, insisting that central government was to blame.

The seminar also heard about another piece of research, carried out by UEA and the University of Essex, into older people’s disability costs and disability benefits.

Ruth Hancock, from UEA’s health economics group, said they had concluded that the disability benefits available to older people – attendance allowance (AA) and disability living allowance (DLA) – were “well targeted at people who have relatively low incomes, people who have difficulty affording the costs that disability brings in later life”.

Hancock said: “We should be much more concerned about the people who do not receive help than maybe those who do receive help and in some people’s views do not need it.

“The current system fails to prevent deep poverty among many older people with disabilities, allowing for personal disability costs.”

Shakespeare told the seminar that disabled people “do not want to be seen as needy and vulnerable and desperate”.

He said: “The discourse that we have is we are going to separate out the undeserving from the very needy, but I think that small amounts of personal assistance or small amounts of benefit can make a huge difference for many, many of us.

“I want to get away from the idea that these are desperately vulnerable people who want to be looked after and [move the discussion] back towards rights. We should be using the funds we have to help people participate and flourish.”

Meanwhile, a group of disabled campaigners and organisations, including Baroness Campbell and the writer and researcher Jenny Morris, are looking for disabled people who access support from their local council to take part in a survey about changes to independent living.

The deadline to take part in the survey is 30 June (Tuesday), and the group aims to carry out follow-up work over the next two years with those who take part, if they agree to leave their contact details.