You are here: Home / Politics / Labour conference: Anger at Starmer’s ‘divisive’ pledge to back ‘working people’ 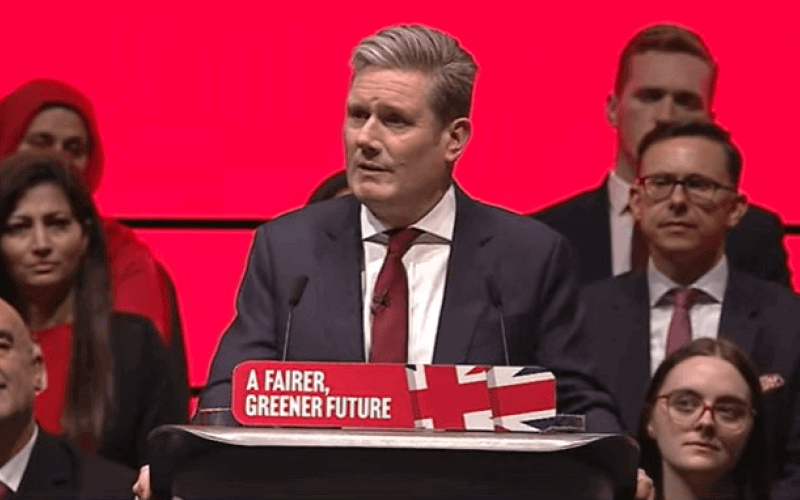 Labour’s leader has been accused by leading party activists of using “divisive rhetoric” and a “deliberate” failure to mention disabled people and others who are out of work in his main conference speech this week.

Keir Starmer mentioned “working people” 25 times in his 5,400-word speech (pictured) but failed to mention disabled people once as he addressed the annual conference in Liverpool on Tuesday.

At one point, he told Labour delegates: “This party is always on the side of working people in times of crisis.”

He also said that, after the first term of a Labour government, he hoped “working people” would be “respected as the people who create the wealth that drives Britain forward”.

And he said he wanted to “make this country work for working people” and that he would “never be shy to use the power of government to help working people succeed”.

Starmer and his senior colleagues have been repeatedly criticised for their refusal to include those who do not or cannot work – including many disabled people – in their interviews and set-piece speeches.

Those comments reminded activists how the party’s shadow chancellor, Rachel Reeves, said seven years ago that Labour did not want to be seen as “the party to represent those who are out of work”.

Ellen Morrison, Labour’s disabled members’ representative on its national executive committee (NEC), said she was “really concerned” that there was no mention in Starmer’s speech of the “huge” numbers of people who are not in work.

In a comment posted online, she said: “Again and again we have heard that Labour is the party for working people.”

She said Starmer had clearly ignored the conversations she had had with him on the NEC, and that this failure was not “a technicality of language” but was “deliberate”.

She said: “I know Keir is aware of this, he has said it is a valid point at NEC meetings, and we know that Keir is a leader who is on top of the detail… so I don’t believe at this point we are some omission… it feels intentional to leave us out of such an important speech.

“Ultimately it is the vision that Keir is setting out and those of us who rely on social security don’t seem to be part of this plan.”

Morrison said she did not understand “how it’s not in alignment with Labour values that we take everyone with us, and we set out to make everyone’s lives better, and I think ultimately it’s divisive rhetoric to keep talking about ‘working people’.

“We should never be pitting people in work against people who aren’t.”

She said his speech seemed to “fly in the face of what I think are Labour values of decency, fairness, and equality”.

And she encouraged disabled Labour members and those in the party who are out of work to “make your thoughts known to the leadership” about the speech.

Kathy Bole, chair of Disability Labour, which is affiliated to the party, said she too was “angry” at Starmer’s speech.

She said: “Keir Starmer has let disabled people down again. There are 25 mentions of working people in his speech and not one mention of the people who are on the edge of a cost-of-living precipice.

“We don’t feature in the life Labour is promising. We are merely a tool to use when elections are in sight.”