You are here: Home / Independent Living / Labour ‘on collision course with UN and EHRC over independent living’ 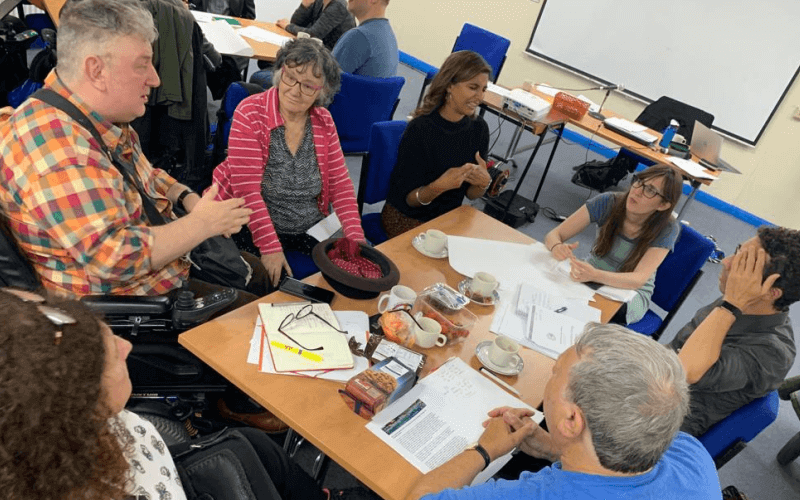 The Labour party is on a “collision course” with the equality and human rights watchdog and the United Nations because of its failure to accept the need for a legal right to independent living, according to a national network of disabled people’s organisations (DPOs).

The Reclaiming Our Futures Alliance (ROFA) has called on Labour to join the TUC in backing its proposals for a new National Independent Living Support Service (NILSS) that would give disabled people crucial new rights to free support.

A meeting of ROFA members and supporters from across England agreed on Friday on their priorities for winning support for NILSS.

Among those priorities was to push Labour to include the plans in its next general election manifesto.

There was also “contempt” at the meeting for the Conservative-led government’s continuing failure to publish its own much-delayed plans for solving the adult social care funding crisis.

ROFA’s demands for a NILSS were first set out in January, in the Independent Living for the Future document, and backing for the plan appears to be growing.

On Friday, the Trades Union Congress passed a motion – proposed by Sean McGovern (pictured, left, at Friday’s event), co-chair of TUC’s disabled workers’ committee – that calls on the next Labour government to establish a NILSS.

The motion had been passed by TUC’s annual Disabled Workers’ Conference in May.

Such a service, running alongside the NHS, would provide a universal right to independent living, with support provided free at the point of need, funded by general taxation, managed by central government, and delivered locally in co-production with disabled people.

Similar motions have been passed by local Labour branches, with the hope that the proposals will be debated on the floor of the party’s annual conference in Brighton from 21 September.

And the day after Friday’s meeting, ROFA member Andrew Day passed Jeremy Corbyn a letter, when the Labour leader visited him during a visit to Norwich, in which he asked him to meet ROFA to discuss the NILSS proposals.

Mark Harrison, a ROFA member who helped draw up the strategy and took part in Friday’s meeting, said the disabled people’s movement was united behind NILSS.

He said the idea could be “transformational” if it was adopted by Labour as part of its general election manifesto.

But he said he did not believe that the party’s shadow social care minister, Barbara Keeley, had engaged with representative DPOs on social care and the right to independent living, as the party should have been doing because of principles laid out in article four of the UN Convention on the Rights of Persons with Disabilities.

Labour disputed this and insisted that Keeley had not refused to meet with RoFA, and “regularly consults with a range of stakeholders, including people with lived experience, on social care policy development”.

Harrison said Labour’s current policies on social care were “pathetic” and “neither transformational nor socialist”.

He said Labour was currently on a “collision course” with the UN committee on the rights of persons with disabilities, which has called for the UK to introduce a legal right to independent living, and the Equality and Human Rights Commission, which has also backed such a move.

Although Labour’s 2017 general election manifesto (PDF) promised to sign the UN convention into UK law, the party has since shied away from promising a legal right to independent living, which is offered by article 19 of the treaty.

Harrison said ROFA would hold the Labour party’s “feet to the fire” over independent living.

He said: “This could be a flagship commitment of a new Labour government coming to power.”

He also said there was “complete contempt” for the government at Friday’s meeting over its failure to publish its plans for social care, and for its own failure to engage with representative organisations of disabled people.

He said “momentum was building” behind the NILSS idea, and he added: “That was the good thing about Friday: the momentum is building up and people are really on it, determined that we are not going to let this one go.

“The Labour party should not be waiting. It should be engaging with us now.”

A Labour party spokesperson said: “The proposals fall across a range of government policy areas, from work and pensions and health and social care to justice.

“They will be considered carefully as part of Labour’s policy development process.”

She added: “Labour is committed to addressing the crisis in social care.

“Our plans for a National Care Service will provide dignity in older age, and independence and support for people with disabilities.

“Our plans will ensure that social care receives the funding it needs, at a time when Tory austerity has created the national crisis in social care.”

The Department of Health and Social Care had failed to comment by noon today (Thursday).