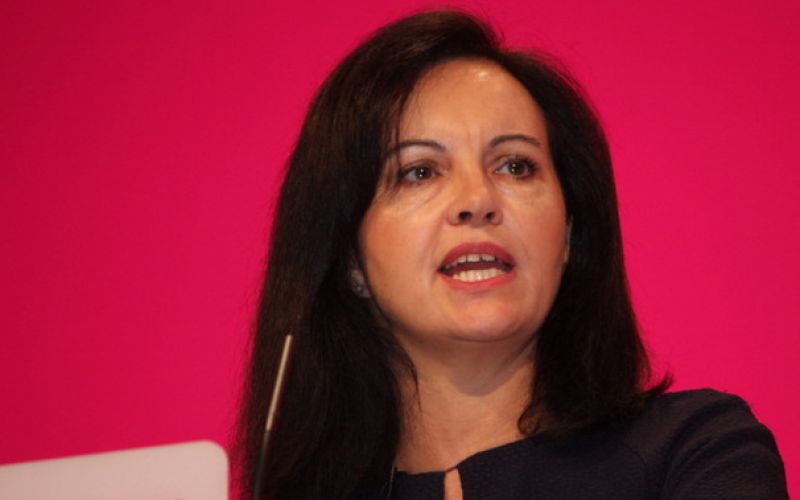 A contender to be Labour’s next deputy leader – a former welfare reform minister – has been forced to defend her decision to accept donations from a lobbying firm used by the controversial company that tests disabled people’s “fitness for work”.

Caroline Flint (pictured), the MP for Don Valley, is benefiting from a former member of staff from Sovereign Strategy working on her campaign – a donation worth £8,000 – and the use of a room in Sovereign’s London offices.

Sovereign, which provides companies such as Formula One and Bloomberg with help in “navigating public life”, is owned by the former Labour MEP Alan Donnelly.

The donations to Flint’s campaign have been declared properly in the parliamentary Register of Members’ Financial Interests, but the entry does not mention – and does not need to mention – that another of Sovereign’s key clients is the US outsourcing giant Maximus.

Maximus has a lengthy record of discrimination, incompetence and alleged fraud in the US and has also been linked with allegations of exploitation and manipulation of government contracts within the Australian welfare-to-work industry.

The company has a huge chunk of Department for Work and Pensions disability contracts, including the contract to carry out the work capability assessment (WCA).

Maximus is also one of the main Work Programme providers, and last year was awarded contracts to run the new Fit for Work service, and – thanks to buying Remploy earlier this year – now provides mental health support in the workplace under the Access to Work scheme.

Maximus also helps disabled people into jobs through the Work Choice programme, in addition to winning a contract – through Remploy – to provide services under the new specialist employability support programme.

Maximus was one of 12 companies featured on a Sovereign webpage devoted to its clients, but its logo has been removed in the last few days.

Sovereign insisted that there was “nothing sinister going on” with the donation, and that Maximus and other clients were “not involved in any way with the choices Sovereign makes in donating to charitable or political campaigns”.

But there was confusion this week over who was funding the two donations.

Sovereign initially insisted they were made personally by Donnelly, but the current entry in the parliamentary register states that it was the company that donated the member of staff.

Flint – a minister for employment and welfare reform in the last Labour government – also said in a statement that the donations were from Sovereign, and that the member of staff was “an active Labour party member”.

But a Sovereign spokesman told Disability News Service that the person working on Flint’s campaign, Vincent Carroll, a London Labour councillor, was no longer “on Sovereign’s pay roll”.

He also said that the office was only used by Flint’s campaign team “after hours”.

Flint has taken a hardline stance on social security, one that could be helpful to Maximus – if she became deputy leader – by providing more political cover for continuing harsh treatment of sick and disabled benefit claimants.

Only five weeks ago, Flint was telling the Sun that Labour needed to be comfortable giving benefit claimants a “kick up the backside”, a story headlined by the paper as “Flint: Let’s kick the spongers”.

This week, a spokesman for Flint’s campaign insisted that she had not used the word “spongers” in the interview, but refused to say whether the article in the Sun accurately represented her views.

He said: “Having been on benefits herself, as a mother of two young children, Caroline strongly believes in social security – help for those most in need, at whatever stage of their life, and a hand up for those who need more help to work.

“That has always guided her approach as an MP and as minister for employment and welfare reform in the last Labour government.

“In her 18 years as an MP, Caroline has helped thousands of people dealing with the different arms of the Department for Work and Pensions, and supported increases in support for disabled people and for carers.”

He said that Sovereign was supporting her campaign because Donnelly believed she was the best candidate to be deputy leader.

Asked whether she was comfortable that Maximus was one of Sovereign’s key clients, her spokesman said the support was “provided by Sovereign and not by any of the clients it represents”, and that Flint had had no contact with Maximus on the issue of welfare reform.

He said: “We are proud to have received donations from many Labour party members and business people supporting Caroline Flint’s campaign to be Labour’s deputy leader.

“All donations are fully and openly declared and are permissible under the Electoral Commission’s rules.”

Donnelly said in a statement that Flint was “an excellent minister, is a very good communicator and is the outstanding candidate in this contest”, and that neither Sovereign nor Maximus had advised her on her position on welfare reform.

This evening (6 August), Sovereign issued a further statement, which said: “No Sovereign staff member is working for Caroline Flint’s campaign.

“Any costs incurred by Sovereign for the work undertaken by Vincent Carroll on Caroline’s campaign will be covered by Alan Donnelly.

“Sovereign has made no payment to Caroline’s campaign but has provided nominal support in kind by providing a small room in our office.”