You are here: Home / Activism and Campaigning / Legal threat to PM over lack of BSL interpreter in £2.6 million briefing room 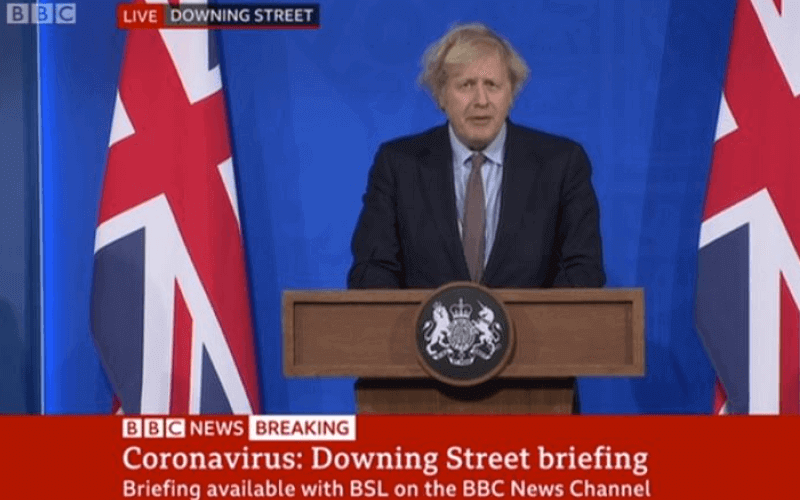 The government is facing the threat of fresh legal action after it failed to provide a British Sign Language (BSL) interpreter at a televised pandemic briefing by the prime minister, despite spending £2.6 million on a new media room.

Deaf campaigners are now spearheading three separate legal cases against the government in connection with its continuing refusal to provide BSL interpreters at vital televised briefings.

Supporters of the #WhereIsTheInterpreter campaign have been trying for the last year to persuade the government that it must provide an interpreter at its pandemic briefings, and not rely on an in-screen interpreter on the BBC News channel.

The government has already admitted that the platform for speakers had no built-in, step-free access for wheelchair-users, despite the £2.6 million cost.

But this week shocked Deaf viewers realised that Johnson had also not ensured the new facilities would allow an on-platform BSL interpreter.

Lynn Stewart-Taylor, founder of the #WhereIsTheInterpreter campaign, said she felt “emotionally zapped” when she watched the BBC One coverage of Monday’s briefing and realised there was no interpreter alongside the prime minister and two health experts.

Stewart-Taylor, a consultant, writer and researcher, told Disability News Service: “Despite the £2.6 million upgrade to a bigger and bespoke media studio, the UK government has, yet again, shown their lack of regard towards the Deaf community, and our pleas for equal access.

“If Scotland, Wales and Northern Ireland can all provide a BSL interpreter in the room of their coronavirus briefings, why can’t the UK government?”

She added: “We didn’t want to have to go to court, to be honest; we were hoping we could solve the issue between us, but this has shown that sign language citizens have been totally and unfairly forgotten and ignored.

“How many more people are there out there who are missing out on COVID information?

“Everyone should be equal and have access to their preferred language.”

She said that she and others were feeling “exhaustion and hopelessness” over the government’s failure to act but were now “even more determined to get justice in the courts”.

She and campaign supporters say the failure to provide an on-platform interpreter – and rely instead on an in-screen interpreter through the BBC News channel – is a breach of the Equality Act, the Human Rights Act and the UN Convention on the Rights of Persons with Disabilities.

Vicky Foxcroft, Labour’s shadow minister for disabled people, said yesterday (Wednesday) that she was concerned about both the lack of an on-platform interpreter and the failure to ensure the platform was designed to be step-free.

She said: “The government need to urgently rectify this failure.

“It is unacceptable that £2.6 million of public money has been spent on a new press room that actively excludes disabled people.

“Once again the Conservatives have shown that disabled people are an afterthought for this government.”

There are now three separate legal actions, all being taken through disability discrimination experts Fry Law.

About 300 Deaf people are taking cases through the county court over the government’s failure to provide any BSL interpreter for a series of televised briefings in the early days of the pandemic.

They are seeking damages from the government for breaching the Equality Act by failing to provide an interpreter for nine separate briefings by Boris Johnson between 3 and 19 March 2020.

These nine briefings took place before the BBC provided an interpreter for COVID-19 briefings on its BBC News channel, and they provided vital information to the public, including informing them that they should avoid pubs and restaurants, that schools were closing, and advising them how to protect themselves from the virus.

A second legal case, being taken by Deaf campaigner Katie Rowley, relates to the failure to provide a BSL interpreter at two televised briefings with health experts in Downing Street on 12 October and 21 September.

Now Rowley is spearheading another legal case, this time over the failure to provide an on-platform interpreter for the prime minister’s briefing on Monday, focusing on the government’s failure to meet its public sector equality duty.

This will argue that, by refusing to provide an on-platform interpreter, the government is continuing to exclude Deaf people from mainstream society.

Deaf campaigners and allies highlight the contrast with other countries, including the devolved Welsh, Scottish and Northern Ireland governments, and Norway, France, Japan, Italy and New Zealand, which have all been able to provide on-platform BSL interpreters for their COVID briefings.

A government spokesperson declined this week to explain how the prime minister justified spending £2.6 million on new inaccessible facilities that do not allow the presence of an on-platform BSL interpreter, or whether the government believed that it had breached its public sector equality duty by spending such a large amount of money on an inaccessible briefing room.

But he said in a statement: “We are committed to supporting disabled people through every stage of this pandemic and have established BSL interpretation at the No 10 press conference via the BBC News channel and iPlayer, available on all TV packages as part of Freeview.”