You are here: Home / Activism and Campaigning / McDonnell calls for disabled-led solution to care crisis, as DPAC occupies parliament 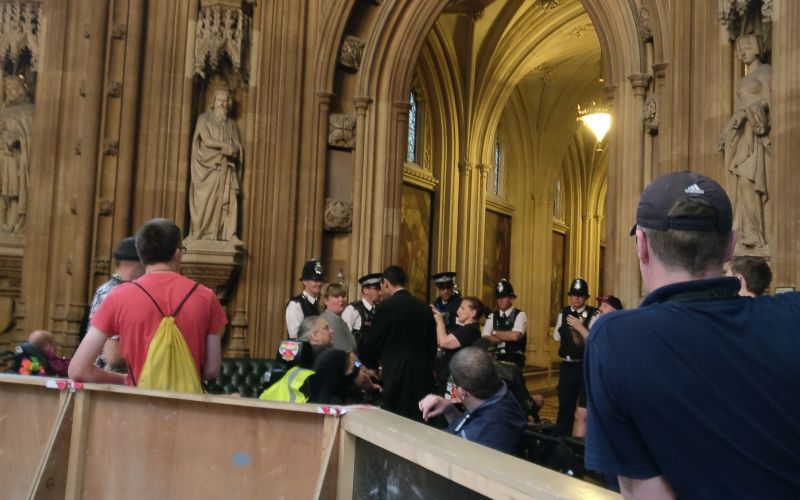 Labour’s shadow chancellor has called for disabled people themselves to be given the job of designing the solution to the social care funding crisis.

John McDonnell was speaking to Disability News Service (DNS) as activists from Disabled People Against Cuts (DPAC) were protesting about cuts to social care, in parliament’s central lobby yesterday (Wednesday).

He said there were two strands to finding a solution to the social care crisis: “One is more money, and two is a system that is designed by disabled people themselves.”

Both he and Labour leader Jeremy Corbyn supported the actions of the activists who protested in the heart of parliament, within earshot of the main Commons chamber, while there was also support from Green party co-leaders Caroline Lucas MP and Jonathan Bartley.

DPAC had arranged the lobby of parliament – as part of its week of action – so activists could raise concerns with their MPs about cuts to independent living support, with campaigners coming from as far as north Wales to take part.

The protest came two years after DPAC came close to forcing their way into the main debating chamber of the House of Commons during prime minister’s questions, in a last-ditch protest against the closure of the Independent Living Fund (ILF) in June 2015.

Yesterday’s lobby took place as Theresa May was taking part in the last prime minister’s questions before the summer recess, but police officers barred the path of activists – including several affected by the government’s decision to close ILF – to prevent them approaching the Commons chamber.

Instead (pictured), they chanted from the central lobby, calling for May to resign, shouting “no justice, no peace” and “Tories out”, and warning that “care cuts kill”.

McDonnell, a long-standing supporter of disabled people’s right to independent living, told DNS, just yards from the protest: “DPAC have been consistently campaigning to expose what is going on.

“They want to bring their voice to parliament on a regular basis to make sure their MPs are aware just how much people are suffering.”

He said the protest was “exactly what people have the right to do, to demonstrate, to make sure MPs are aware what they are experiencing, what disabled people are experiencing”.

He said it “was perfectly justifiable in the light of what is happening, with people’s suffering as a result of austerity”.

McDonnell said that any solution to the social care crisis had to come from disabled people themselves.

He said: “Nothing for us without us is a fundamental principle of this. Measures, certainly over the last seven years, have been imposed on disabled people by central government without any real understanding of what people’s life experiences are like.

“Every individual MP must have experienced what has happened in recent years, with the withdrawal of care and the withdrawal of benefits, which has plunged people into absolute desperate poverty, and we know how many people have lost their lives as a result as well.

“The whole point now is of course we need more funding but at the same time we need a system that is designed by disabled people, because they know best [how that should be done].”

“This government has got to act, and if they won’t act they should stand down from power and allow Labour to come to power to tackle this.”

Corbyn also spoke to DNS and offered his support for the protest.

He said that cuts to social care had led to many disabled people “losing the possibility of a genuinely independent life and genuinely supportive accommodation”, which he had seen in his own and other constituencies.

He said this was why Labour had said during the general election campaign that it would put more money into social care.

He said: “Social care we did raise a great deal in the general election.

“It often gets assumed that all social care needs are for older, dependent people.

“Of course, many are, but there are also those with disabilities or often quite young people with very special needs that need social care, of whom some obviously are here today.

“I do fully understand that and that is why we made the points we did during the election campaign.”

Corbyn also backed the right of disabled activists to protest in the heart of parliament, saying that “everyone has a right to protest”.

McDonnell had earlier liaised with Commons security staff after a DPAC activist had become distressed when he was prevented from accessing parliament because he was wearing a tee shirt which raised awareness about invisible impairments.

After McDonnell’s intervention, he and another activist, who was wearing a DPAC tee shirt, were allowed into parliament.

DPAC is calling for “urgent action” to tackle the social care funding crisis, and for the government to ensure that the green paper and consultation promised by May will address issues such as upholding disabled people’s right to independent living; protecting the futures of disabled younger people; ensuring the necessary infrastructure to support the use of personal assistants; and enabling councils to fulfil their obligations under the Care Act 2014.

DPAC said that “most basic choices such as when to get up, go to bed or use the toilet, when and what to eat, and the choice to leave the house are no longer in the hands of disabled people but subject to local authority budget allocations which are becoming ever more restricted”.

Activists who took part in the lobby told DNS why they wanted to speak to their MPs about independent living.

Disability activist Nathan Lee Davies travelled from Wrexham, north Wales, to attend the lobby and put pressure on Theresa May to fulfil her promise to review social care funding.

“It is looking very, very bleak at the moment.”

Several campaigners from Camden wanted to raise their concerns about the council’s plans to increase charges for council-funded social care in the north London borough, while at the same time spending £44 million renovating its old town hall building.

One carer, who has an adult disabled son, said the imposition of new charges of more than £30 a week on his care meant he might not be able to afford the therapies and supplements he needed to stay healthy.

She said: “When I die, what the heck is going to happen? Will he get so little money that he can’t get his supplements and therapies and will continue being ill?”

Claire Glasman, from the disabled women’s organisation WinVisible, said: “We are very worried that other boroughs are going to use Camden as an excuse to hike up their charges as well.”

She said she had heard from a carers group in another London borough that the council had quoted Camden’s actions as a reason for increasing charges.

Glasman also said that one disabled woman from Camden had given up her council-funded support because it imposed charges on her, having warned the local authority that that was what she would do.

Now she has had to ask WinVisible to find help with reading her letters and visiting the doctor.

Glasman said this was quite a common problem, and added: “They want people to be self-financing and self-managing, which is their jargon for ‘get on with it yourself’.”

Sue Elsegood, from Greenwich, said she wanted to talk to her MP about a concern faced by disabled people who previously received support from the Independent Living Fund and were now receiving personal health budgets.

She said that she and other disabled people in such situations were now being told that they cannot receive funding to pay for their own PAs when they are admitted to hospital.

She said a friend who was in hospital had lost her one-to-one PA support, and had to rely on assistance from nursing staff. This also meant that her PAs were not being paid while she was in hospital.

Elsegood said: “I am terrified at the prospect of going into hospital. It doesn’t make any logical sense because it will save money if people recover more quickly in hospital, and it also supports the hospital staff.

“It would be impossible for someone who has 24-hour support at home to have their daily needs and general welfare met [in hospital].”

Elsegood said she had not been warned about the policy before she was transferred to a personal health budget.

She said some wards had only one member of nursing staff to seven patients, whereas she and other former ILF-users might require one-to-one support.

She said she was also at the lobby to add her backing to protests against the austerity cuts, because many disabled people had had their social care packages cut and “are really struggling”.

Roger Lewis, from DPAC, said the government was “redefining disabled people as outsiders” and “a burden” and “not economically viable” through its cuts to social care, and was suggesting they were entitled only to the “lowest acceptable level of care”.

He said the cuts to social care had most affected local authorities that were already “hit hardest” by government cuts and had the highest levels of deprivation and social inequality.

And he called on the government to reopen the Independent Living Fund which “kept people out of residential care and allowed then to live in their communities equally”.

He said he was most concerned by the “reintroduction of residential living” as an acceptable form of support and one that was part of a private market.

He said the years of cuts had “pushed us back 30 years” on independent living.