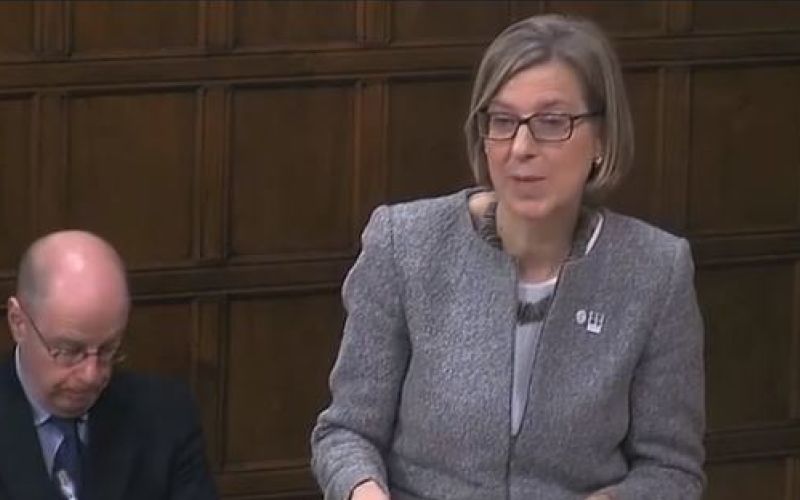 The minister for disabled people has refused to apologise for misleading MPs about a court of appeal judgment that was highly critical of her new boss, Esther McVey, just a day after her appointment as the new work and pensions secretary.

Sarah Newton was responding to a Commons debate on the Independent Living Fund (ILF), less than 24 hours after McVey’s surprise appointment as the replacement for David Gauke in this week’s ministerial reshuffle.

McVey played a crucial role in the fund’s closure – one of the cuts and reforms that has most angered disabled people over the last eight years – as minister for disabled people between September 2012 and October 2013.

And in November 2013, a month after she was promoted to the role of employment minister, three court of appeal judges delivered a damning judgment about the decision she had taken in December 2012 to close the fund.

The three judges unanimously overturned an earlier ruling by the high court and found that her decision to close the fund was unlawful, and that she had breached the Equality Act’s public sector equality duty.

She was heavily criticised by the judges, with one saying there was no evidence that she had “directed her mind to the need to advance equality of opportunity”.

He added: “Nor is there evidence she considered the proposals having due regard to the need to minimise the particular disadvantages from which ILF users and other disabled persons suffer or the need to encourage such persons to live independently and to participate in public life and other activities.”

The judges were also highly critical of DWP officials, with one saying there was a tendency for officials “to tell the Minister what they thought she would want to hear”, although he added that he was convinced that McVey “was sufficiently aware of the very real adverse consequences which closing the fund would have on the lives of many of the more severely disabled”.

The government, through McVey’s replacement, Mike Penning, later went ahead with the closure after reconsidering the decision, this time paying proper attention to DWP’s legal obligations.

DWP also defeated a second legal attempt by a disabled campaigner to overturn the closure.

But despite the judges’ criticism of her new boss and the finding that the closure had been unlawful, Newton told fellow MPs in Westminster Hall this week (pictured) that the government’s decision to close ILF “was challenged in a judicial review, and throughout the process the DWP won on all points”.

Newton added: “It was judged that the consultation was fair and that it had paid due regard and proper attention to the public sector equality duty.”

A DWP spokeswoman told Disability News Service that Newton had been aware of the court of appeal’s decision.

But she said: “As the debate focussed on the effect on claimants following closure of the ILF along with forthcoming changes coming into effect in devolved administrations, the minister did not intend to discuss the different legal proceedings in any depth but responded to challenges in the debate as required.”

She added: “The preparation for the ILF debate was carried out well before the reshuffle, and the minister had no prior knowledge of its outcome.”

She had failed to say by noon today (Thursday) whether Newton would apologise for misleading MPs about the court of appeal’s ruling and its severe criticism of McVey.

Tuesday’s debate had been secured by the Welsh Labour MP Ian Lucas, and was focused on the decision of the Welsh government to start devolving funding – paid by the UK government following the ILF closure in 2015 – to local authorities in Wales, without ring-fencing it for former ILF-users.

The funding had previously been used in Wales to set up the Welsh independent living grant (WILG).

Lucas paid tribute to his constituent, Nathan Lee Davies, a former ILF-user who has campaigned against the Welsh government’s decision to scrap WILG and begin devolving the funding later this year.

Last September, Davies handed in a petition of hundreds of signatures that called on the Welsh government to reverse this decision.

Davies has been told that without WILG his own care package would be reduced from 86.5 hours to just 31 hours a week.

Lucas told fellow MPs: “As a result of support from the fund, Nathan has been able not only to live in the community but, as the ILF intended, to contribute in a really positive way to the community in which he lives, notwithstanding his disability and the challenges that he faces.

“The difficulty is that doubt about the future of the fund in Wales is now causing Nathan great worry.

“Devolution of funding to local councils when their budgets are under great pressure means that there is no guarantee that the levels of funding will be maintained, even if an individual recipient’s condition deteriorates.”

He said he would now discuss the future of the fund in Wales with his own party – including Welsh ministers – because he was “not convinced that the evidence from what has happened in England [where funding has been devolved for nearly three years] supports devolution to local authorities as a good way forward”.

SNP’s Patricia Gibson urged Newton to learn lessons from Scotland, where the Scottish government has set up its own Independent Living Fund Scotland.

Marsha de Cordova, Labour’s shadow minister for disabled people, said that “extensive cuts to local government funding” had led to many disabled people being “restricted or limited in the lives they could lead”.

She said: “We would all agree that it is fundamental that disabled people’s independence should not be dependent on the level of funding or eligibility criteria set by an individual local authority.

“Distribution of funding should also be based on need; therefore, there should be some sort of universal policy for how that is done.”

Newton insisted that the decision to close the fund was “driven by a clear case for reform, rather than any desire to cut costs” and that ILF had become “increasingly outdated” because choice and control was now “far more available in mainstream provision than it was at the time when people thought we needed an Independent Living Fund”.

She argued that the Care Act 2014, brought in under the Conservative-Liberal Democrat coalition, had “brought in consistency in eligibility and in quality of care”, and that transferring ILF funding to local authorities was “very much part of the government’s thinking on supporting the principles of localism”.

She said councils would have access to £9.25 billion more in social care funding over the next three years, and that “with this additional funding, local authorities have the ability to meet the needs that have been clearly set out there and to meet the responsibilities set out in the Care Act”.

But she also claimed that the former ILF funding had been “certainly transferred in the full expectation that its recipients would have their funding maintained”.

Former ILF-users in England are likely to find that claim surprising, as there have been many reports of individual ILF-users who have had their support slashed following the fund’s closure, including that of Luke Davey, who lost a high-profile legal bid last September to reverse a drastic cut to his support package.

And research by Newton’s own department found that some former ILF-recipients experienced a loss of support, a greater reliance on unpaid care and an “adverse” impact on their physical and mental health after its closure.