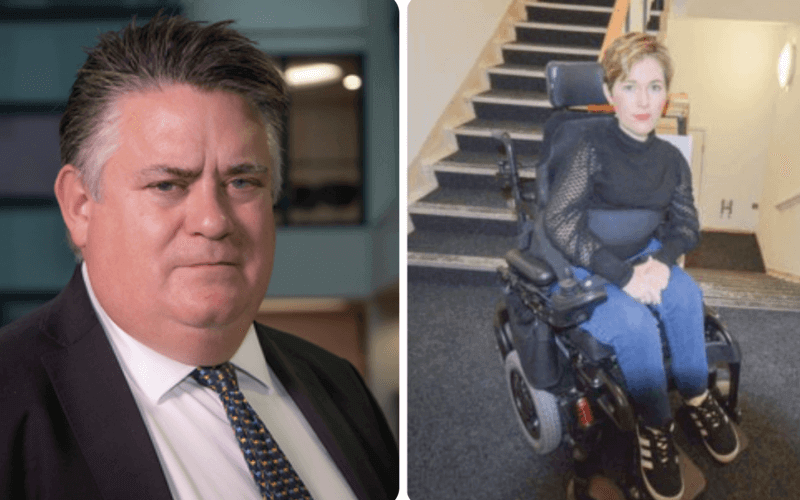 A minister has been told that his government’s “absurd” plans to protect disabled residents who would need assistance if they had to evacuate from high-rise blocks of flats are “dangerously misplaced”.

A parliamentary meeting heard this week that the “arbitrary” proposals drawn up by the government would mean that only those disabled people living in blocks more than 18 metres in height would be given the legal right to a personal emergency evacuation plan (PEEPs).

Sarah Rennie, co-founder of Claddag, a leaseholder disability action group, said this was a “dangerously misplaced assessment of risk”.

She said it would lead to “absurd scenarios where a disabled person living on the ground floor of a high-rise building will have a legal right to a plan but somebody who is maybe on the sixth floor of a mid-rise building won’t be entitled to one”.

She was speaking at a joint meeting of the all-party parliamentary groups on disability and on fire safety and rescue, attended by building safety minister Lord Greenhalgh.

The meeting was discussing a government consultation on plans to force owners and managers of high-rise residential buildings to prepare PEEPs for all residents who may find it difficult to “self-evacuate”.

The consultation, which closes on Monday (19 July), was forced on the government after it tried to water down recommendations on PEEPs made by the Grenfell Tower Inquiry.

Many disabled residents were among the 72 people who lost their lives in the fire, on 14 June 2017, and the inquiry into the fire later detailed how they were failed repeatedly by both London Fire Brigade and the organisation that managed the building on behalf of a local authority.

The meeting also heard from Flora Neda, a disabled resident of Grenfell Tower and one of only two survivors from the top floor of the building, who told MPs and peers that her husband – who died in the tragedy – would still be alive today if she had had a PEEP in place (see separate story).

But Rennie and other disabled campaigners and allies say that the measures now proposed by the government will still not go nearly far enough and will leave many disabled residents without a legal right to a PEEP.

She told this week’s meeting: “For years, non-disabled industry experts have frankly played god by insisting that we, disabled people, must stay put, wait to be rescued, whilst we watch everyone else calmly leave the building to a place of safety.

“We’ve been told it’s the safest thing for us when frankly the reality is that we have not been given the options or the opportunities to make informed decisions.”

She said the “arbitrary” 18-metre rule was “unjustified”, while there were concerns that disabled people would be forced to pay for the aids and adaptations needed to ensure a safe evacuation.

She called on the government to set up a central fund to pay for these “essential costs”, which would also avoid them being forced onto other leaseholders as service charges.

The meeting heard how one disabled woman, Georgie, had been forced to crowd-fund for an evacuation chair because the managing agent of the block of flats where she lives – which is less than 18 metres high – had refused to provide her with a PEEP, and when she paid for one herself, refused to pay for the evacuation chair recommended in the plan.

Rennie said the consultation was also “totally silent” on how the PEEP proposals would be monitored and enforced.

Elspeth Grant, a former secretary general of the Institute of Fire Safety Managers but representing Disability Rights UK at the meeting, said: “In the Grenfell Tower fire, a grossly disproportionate number of disabled people died.

“No-one can explain why there were no PEEPs in place prior to the fire.”

She added: “Today there are tens of thousands of residents living in fear because they are unable to evacuate or even to move away from imminent danger if their own flat or a flat on their floor is on fire.

“Disabled residents are routinely refused PEEPs, even when a building has an immediate evacuation strategy due to dangerous structural defects.

“An average response time for the fire and rescue service is very fast – eight minutes.

“However, if you’re in a high-rise or a medium-rise it can be up to a further 20 minutes before a firefighter is actually in a position to rescue a disabled person on an upper floor.

“A properly developed PEEP would enable the disabled person to move away from danger quickly without requiring a rescue.”

She added: “How many of us would be prepared to live or have our loved ones live in a building from which they could not escape?

“Yet this is the position that tens of thousands of disabled residents find themselves in in 2021 in the UK.”

He said there would be a “regulatory regime” for “high-risk, high-rise residential buildings, with the building safety regulator and the chief inspector of buildings providing that oversight for the 12,000 high-rises”.

But he said he had heard the call to take further steps on PEEPs.

And he told the meeting that the government’s proposals “do not see the PEEP as a driver of cost in and of itself” but that he also heard the concerns being raised about costs, although “where it lies” is currently “a matter for the responsible person” (likely to be the building’s owner or manager).

Sir David Amess, the Conservative MP who chairs the fire safety and rescue all-party group, told the meeting: “Hundreds of blocks of flats will continue to be wrapped in flammable cladding and/or riddled with internal safety defects for years yet.

“Many disabled people have no refuge area or opportunity to move away from fire if it was in the flat next door.

“The height criterion, I believe, is the wrong test. Everyone unable to self-evacuate a building must have the right to a PEEP.”