Ministers have finally announced that they will act to protect the rights of wheelchair-users to travel on buses, nearly 14 months after a ground-breaking Supreme Court ruling.

The Supreme Court ruled in January 2017 that First Bus had breached its duty to make reasonable adjustments for disabled people under the Equality Act through its “first come, first served” policy on the use of wheelchair spaces.

The ruling followed a five-year legal battle fought by disabled campaigner Doug Paulley (pictured after the ruling), who had been planning to travel to Leeds to visit his parents in February 2012, but was prevented from entering a bus because the driver refused to insist that a mother with a sleeping child in a pushchair should move from the only wheelchair space.

The Supreme Court ruled that a driver must do more than simply ask a non-disabled passenger to move, but did not say exactly what actions bus companies should take, or how the needs of passengers should be taken into account.

The Department for Transport (DfT) subsequently set up a group of six advisers – two representatives of the transport industry, two from the Disabled Persons Transport Advisory Committee (DPTAC) and two from the transport user watchdog Transport Focus – to produce recommendations for action.

The task and finish group on the use of wheelchair spaces on buses – which did not include any representatives of disabled people’s organisations (DPOs) – submitted its report to transport ministers last September, but DfT has only now published it, nearly six months later.

And despite ministers welcoming its four main recommendations “in principle”, they have now announced a period of “further engagement”, with “a view to bringing forward a package of measures” later this year.

The task and finish group concluded “that drivers need to play an active role in ensuring that the wheelchair space is made available for passengers in wheelchairs, which includes requiring other passengers to move where necessary, but that drivers also need more powers than they have currently to enable them to do this effectively”.

A DfT spokeswoman said later that these other passengers should include “people with walking aids, parents with disabled children and assistance dog owners”.

The task and finish group also recommended that the government should update conduct regulations, which detail drivers’ duties and expected behaviour – and produce fresh guidance – to make it possible for drivers to remove passengers from a bus if they “unreasonably refuse to move” from the wheelchair space.

The group also called for efforts to raise public awareness about how the wheelchair space should be used, and to improve training for bus drivers.

Paulley said he did not understand why the report was only being released now, six months after it was completed, with the prospect of a further period of consultation.

He welcomed the prospect of amendments to the conduct regulations but said there was a lack of “very concrete recommendations” to the government.

He also raised concerns about the apparent prospect of drivers being given the power to remove passengers from buses.

He said: “I don’t think drivers actually want that power.”

Instead, he said, they should be able to treat someone failing to move from the space “just as any other anti-social behaviour on the buses”, for example by stopping the bus and refusing to continue the journey until the passenger in questions leaves the space.

And he said it was “really not good” that there was no DPO represented on the task and finish group.

Paulley said he believe the task and finish group’s report was “far too woolly”.

He said: “I am glad that they recommended changing the conduct regulations and that the government have not entirely rejected that out of hand as they did previously [in an earlier consultation].

“Other than that, it seems far too slow. There’s going to be further consultation. It’s taking far too long for something that should be decisive and quick.”

Alan Benson, chair of the user-led campaigning charity Transport for All, said: “We welcome the Department for Transport’s commitment to improve bus access.

“It’s been over a year since the very clear ruling from the Supreme Court, so we’re delighted to see the government finally taking these steps to improve bus access.

“It’s time to put an end to wheelchair and mobility scooter users’ daily struggle to access the wheelchair priority space.

“We also need awareness campaigns so that drivers and the public better understand that this space is there to meet all mobility needs, including walker and assistance dog users.

“As well as strengthening their policies on wheelchair priority, we want to see bus companies introduce better inclusive designs for buses, with a larger wheelchair spaces and a separate spaces for buggies and luggage to ensure that disabled and older people can travel with confidence.

“Some buses on Transport for London routes… already have a space big enough to comfortably accommodate both a wheelchair and a buggy.

“We also know that a few bus companies around the UK have such a design.”

Philip Connolly, policy manager for Disability Rights UK, said: “The government appear to have a new policy position that will be enforceable, providing they are willing to change the law.

“This is not a case of wheelchairs versus buggies, it is a move which should restore rights to access transport to wheelchair users.

“Disability Rights UK was at the forefront in demanding a change in the law as the only viable solution to this issue. We hold the government to their promise.”

Transport minister Nusrat Ghani said: “Passengers with disabilities must have the same opportunities to travel as other members of society, and it is essential that the services they rely on are accessible and work for them.

“That’s exactly why last year we set up a group representing a broad range of stakeholders with a variety of different perspectives, to examine how we support disabled people in their day-to-day lives.

“We have also developed guidance on disability awareness training for bus drivers, which we plan to publish later this year.

“This is the next step in our work to ensure transport networks help those with disabilities to live independent lives.”

Asked why there had been no DPO represented on the task and finish group, a DfT spokeswoman said its membership had “represented a broad range of stakeholders with a variety of experiences and perspectives” and that it was appropriate to seek DPTAC’s advice because it was “statutorily charged with advising ministers on the transport needs of people with disabilities”.

Asked why it had taken DfT so long to publish the report, she said it had been “extremely important for government to listen carefully to stakeholders on this issue and come to a considered response, taking all views into account”.

She added: “We understand the importance of improving access to the wheelchair space swiftly and appropriately, and look forward to continued dialogue with a broad range of stakeholders as we develop specific interventions.”

She said the task and finish group had produced “a balanced package of measures giving drivers the tools to address inappropriate behaviour, clarifying our expectations of drivers and passengers, and encouraging passengers to act with greater consideration.

“We know that implementing measures in isolation is unlikely to result in a better, more consistent experience for passengers with disabilities, which is why we are continuing to work with stakeholders on this.” 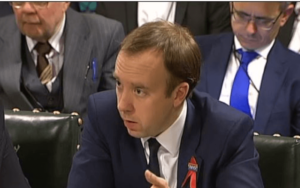