You are here: Home / Benefits and Poverty / Months of PIP distress ‘hastened my brother’s death’ 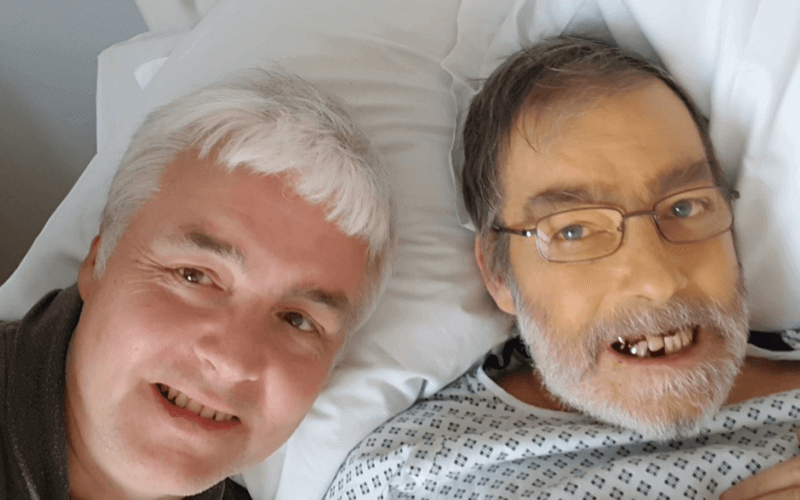 The brother of a disabled man who was denied disability benefits when he was dying has launched a petition calling on the government to scrap the outsourcing of all face-to-face assessments to private contractors.

James Oliver, from Hastings – the constituency of former work and pensions secretary Amber Rudd – spent the last few months of his life in despair over the refusal of the Department for Work and Pensions (DWP) to grant him personal independence payment (PIP).

Shortly before he died in hospital, in April this year, he told his brother, Dave Smith: “I can’t believe it. I am dying, I am going to be dead, and I’m still not sick enough to get PIP.”

Oliver, who had chronic liver disease caused by alcohol dependency, as well as other health conditions including scoliosis, hypertension and depression, had twice tried to claim PIP, but both times was found ineligible.

In 2016, he is believed to have applied for PIP for the first time when his health worsened and left him barely able to walk.

He had a face-to-face assessment with a paramedic employed by Atos*, one of the two outsourcing companies paid hundreds of millions of pounds by DWP to carry out the tests on its behalf.

The assessor awarded him zero points for every area of the assessment, which meant DWP rejected his claim, a decision which is believed to have been confirmed at an internal review, through the mandatory reconsideration process.

Although Smith is not certain of the details, he believes his brother had a second Atos PIP assessment last year, and was again awarded zero points, even though his health had worsened.

The subsequent decision by DWP to deny him PIP again was upheld, following another mandatory reconsideration.

Now Smith (pictured, left, with his brother in hospital less than 12 hours before he died) is working through his brother’s paperwork line by line, highlighting the inaccuracies and what he believes are lies in the assessment reports, including comments about the way he walked and read, and his clothes and memory.

In reference to the 2016 report, he said of his brother: “His liver is failing, his other organs are giving up, he has scoliosis, he has a backside red raw from the incontinence, he has open sores all over his body, his stomach is permanently swollen and he holds it when trying to walk because of the pain, he has pain in his arms and legs, he is regularly coughing up blood and bleeding internally, he has piles and he has pain in both hands, he is wheezing and exhausted after a few steps and constantly needing an inhaler and he needs a stick or support of house furniture to walk.”

Despite this, the assessor awarded him zero points, which led to him being denied PIP and which Smith said amounted to “blatant disability discrimination”.

The tribunal appeal against the refusal to award him PIP was due to take place late last month but has been postponed, following a request by DWP.

His brother is certain that the months of anxiety, depression and distress caused by the refusal to award him PIP last year hastened his death.

He told Disability News Service (DNS): “He felt nobody would help him. Whereas before he had been sticking to his doctor’s orders and restricting his drinking, when he was told he was having to go to tribunal he just gave up.

“All he kept on about was he wasn’t sick enough for PIP. He was a total physical mess.”

Smith said he has yet to hear from DWP, despite sending his details to the department six months ago.

The Hastings advice centre that dealt with Oliver’s claims is believed to have written to Rudd to complain about the way the case has been dealt with.

Like many other campaigners, Smith believes ministers and senior civil servants should be held accountable in the criminal courts for their failure to make the system safe for people in vulnerable situations.

Now he has launched a petition that he hopes will secure enough signatures – 100,000 – to ensure the issues are debated in parliament.

His petition calls for an end to the use of private contractors for DWP disability benefit assessments, both for PIP and for employment and support allowance (and its universal credit equivalent).

He says in the petition that the disability benefit assessment system is linked to many suicides and “accelerated deaths”, like his brother’s.

And he says he believes – in claims backed up by DNS’s own investigations – that there have been “multiple lies” in the written assessment reports completed by nurses, paramedics and occupational therapists working for Atos and Capita (the other PIP assessment contractor).

Smith has been in contact with Joy Dove, whose daughter Jodey Whiting took her own life in February 2017 after her out-of-work disability benefits were wrongly stopped for missing a work capability assessment.

He praised Dove’s “continued bravery” for continuing to speak out about her daughter’s death.

He said: “For me she is an inspiration to keep fighting and highlighting the bullying, ineptitude, discrimination and lies coming out of the DWP and its assessment agencies.”

And just as in Whiting’s case, the family’s grief was worsened by receiving a letter about his claim, addressed to Oliver at his home address, even though DWP had been repeatedly notified of his death.

In his case, the letter came from the tribunal service.

Smith said: “If this was a company with this many deaths on its hands, it would be forced to cease trading and have a criminal inquiry.

“All the promises of ‘it will never happen again’ by the DWP are a total waste of time because it is a department which doesn’t know how to behave in a humane way.

“We could sit back, do nothing, and let the government treat us like a worthless waste of space when we get ill.

“Or we can do something about it and let them know in no uncertain terms that under the Human Rights Act we deserve to be treated with respect and dignity and that their bullying and victimization will not be tolerated.”

A DWP spokesperson declined to say if the department was happy with its decision-making in the case and whether it showed the system was not fit for purpose, and that DWP should stop outsourcing assessments.

But he said in a statement: “Our thoughts are with Mr Oliver’s family at this difficult time.

“We are very sorry for the distress caused and are looking into this to prevent it happening again.

“We want the assessment process to work well for everyone and have made significant improvements, including introducing ESA life-long awards and light-touch 10-year PIP reviews for those with the most serious, life-long conditions.

“The number of complaints about PIP assessments represents one per cent of the total number of individuals assessed.

“Decisions are based on all the information provided to us by applicants, as well as that from their GP or medical specialist.”

DNS revealed last month that disabled people were almost twice as likely to win their disability benefit appeal than they were 10 years ago, at the start of almost a decade of Conservative control of DWP.

The proportion of tribunal appeals that found in favour of disability living allowance (DLA) claimants was just 38 per cent in 2010-11, the first year of the Conservative-Liberal Democrat coalition.

The latest figures show that 73 per cent of PIP claimants in 2018-19 saw the decision originally made by DWP decision-makers revised in their favour at tribunal.

An Atos spokesperson said: “It is not possible for us to comment on individual cases however our thoughts are with Mr Oliver’s family at this time.

“Our focus is to provide a professional and compassionate assessment service for everyone.”