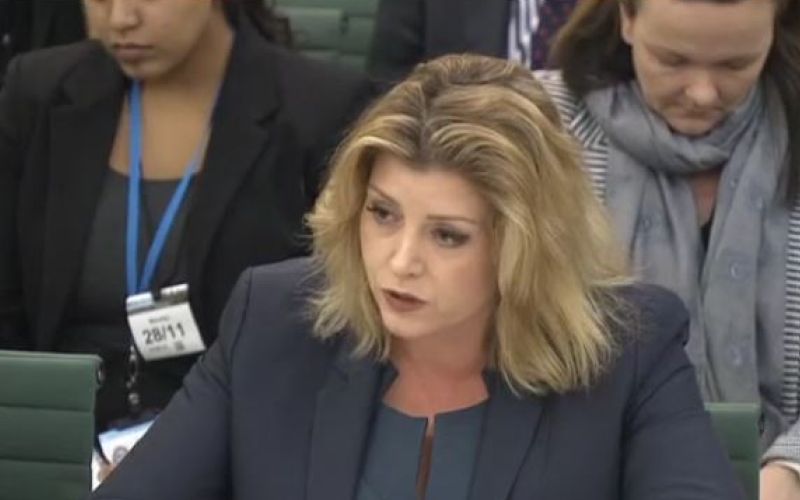 The minister for disabled people misled a Commons committee about the government’s pledge to halve the disability employment gap… less than two minutes after she began giving evidence.

Penny Mordaunt (pictured) began speaking to the work and pensions select committee at 4.18pm on Monday by confirming her name and ministerial duties, but by 4.20pm she was claiming – in response to a question from Labour MP Neil Coyle – that the government had never set a target date for halving the gap.

Mordaunt should have known that was not true because just 11 days earlier she had been in the House of Commons chamber when Labour MP Stephen Timms pointed out that a press release issued by her department last year had stated that the government “aims to halve the gap between the disabled employment rate and the overall employment rate by 2020”.

The pledge had also been included in the party’s 2015 general election manifesto, which stated that the next Conservative government would “aim to halve the disability employment gap”.

It was a pledge repeated by the prime minister in one of the general election television debates.

Despite being present on 17 November, in an otherwise nearly-empty Commons chamber, when Timms drew attention to the press release – subsequently highlighted by Disability News Service (DNS) – Mordaunt told the committee this week that the pledge “didn’t have a specific time commitment at the end of it”.

While Mordaunt continued to give her evidence, DNS contacted Coyle via social media, and included a link to the Department for Work and Pensions (DWP) press release.

Coyle then told Mordaunt about the press release, and said: “With respect, you said the department never had that commitment. That is false.”

She replied: “That is my understanding. The press release you refer to I have not been able to find.

“It just isn’t a manifesto target. That doesn’t mean we don’t want to do it.”

Coyle later tweeted: “@johnpringdns thanks for the link. Apparently Minister @PennyMordauntMP couldn’t find it & no #DWP official could either. Rather worrying…”

Asked later if the minister would apologise for misleading MPs, a DWP spokeswoman said: “As mentioned in the Conservative manifesto, the government aims to halve the disability employment gap and is taking action to do so but there was never a firm commitment to achieve this by 2020.

“It is been widely recognised that this is a bold and challenging target and the previous minister for disabled people’s press release makes clear that this is an aim – rather than a commitment.”

It is not the first time Mordaunt has been criticised for misleading MPs.

In October, she told the Commons that under personal independence payment – compared with disability living allowance, which it is replacing for working-age claimants – “more people are entitled to use the Motability scheme”.

But Motability’s own figures show that of their customers who have been reassessed for PIP so far, 44 per cent have lost their entitlement to the scheme and have had to return their vehicles.

Mordaunt made it clear in her evidence to the committee this week that measuring the disability employment gap should no longer be the government’s focus, because any measurement would “not be meaningful for a number of years”.

She was further embarrassed during the session – which was taking evidence for the committee’s inquiry into the disability employment gap – when fellow Tory MP Richard Graham raised doubts about the Disability Confident events for employers being hosted by MPs around the country.

He said he and other MPs had held “very helpful” Disability Confident events in their constituencies.

But he added: “You get lots of employers who sign a board, a photograph is taken, a press release is issued, people go away with a warm and fuzzy feeling, but it’s about how many of them actually go away and do something.

“When I have sent emails to all of those who have signed, asking them to give me chapter and verse on how many people with disabilities they have subsequently employed, the ones who respond are the ones who were already doing this beforehand and they have done a bit more, but the ones who signed it because they felt it was a good idea… on the whole don’t really come back.

“This leads me to suspect that not a great deal has really happened.”

She said that employers often need a “real business reason” to take action, and so the permanent secretaries of every government department had signed up to the scheme and would give preference to Disability Confident Leaders when awarding contracts.

She said: “If you want to win a government contract and you’re not a Disability Confident Leader, you stand less chance of winning that contract.”

Meanwhile, figures obtained by Disability News Service through a freedom of information request suggest that Graham’s concerns could be justified.

For the eight months from December 2015 to July 2016, about 100 employers a month were registering interest in the Disability Confident scheme, but an average of only 13 every month expressed a wish to be contacted by Jobcentre Plus to discuss their recruitment needs or how to support a disabled employee.

In July this year, just four employers across the entire country asked for such advice.