You are here: Home / Transport / Motability customers ‘will benefit from hundreds of millions of pounds in new funding’

Disabled people and families with disabled children will benefit from hundreds of millions of pounds in new funding released by the company that runs the Motability car scheme.

Motability Operations announced on Friday that it would release £370 million from its financial reserves to support disabled people and their families, and not all of them will be Motability customers.

The move follows repeated criticism from MPs on the Treasury and work and pensions select committees about high levels of financial reserves held by Motability Operations – which reached more than £2.6 billion in March 2018 – as well as issues such as high rates of executive pay at the company, a lack of transparency, and a critical report from the National Audit Office (NAO).

The company now plans to spend £100 million of the funds it is releasing from its reserves on supporting customers, while the other £270 million – as well as all this year’s profits – will be handed to Motability*, the charity which oversees its work.

This could amount to tens of millions of pounds more than £270 million, as Motability Operations made more than £100 million in profits last year in addition to a £400 million donation to the charity.

The charity has decided to use the extra funds to set up a new endowment fund that will act as a “long-term insurance policy” and allow it to expand its “charitable horizons”.

The two organisations have confirmed to Disability News Service (DNS) some of the ways in which they plan to use the extra funds to support disabled people.

One of the most eye-catching initiatives for the Motability charity is a plan to expand the number of grants it makes to disabled people with high support needs to allow them to lease adapted vehicles.

Such a move would be a success for disabled campaigners who have long called for Motability to use more of its substantial resources to fund expensive, heavily-adapted vehicles for disabled people who would otherwise be unable to engage with their local community.

The charity is also considering providing more funds to pay for driving lessons for disabled people, while it is hoping to help more people with disabled children under three years old with high support needs, building on a pilot scheme it has been running with the Family Fund.

Some of the funds could also be used to help disabled people who are not Motability customers with their transport needs, for example with research projects exploring the use of new technology.

Only disabled people receiving the higher mobility rates of disability living allowance (DLA) or personal independence payment (PIP) – or similar payments for former members of the armed services – are eligible to join the Motability scheme.

In a written “rationale” for setting up the endowment fund, Lord Sterling, the charity’s chair, said that Motability was also in “very active discussions” with the Department for Work and Pensions in “areas of particular interest to them, where we can help disabled people with both expertise and money”.

This will include extending the period in which customers can keep their Motability vehicle while waiting for their appeal to be heard, if they lose entitlement in the move from DLA to PIP, as has happened to tens of thousands of customers since the introduction of PIP by the coalition government in 2013.

A Motability spokesperson said: “We recognised that there was an issue with customers returning their car before the completion of the appeal process, so in April 2017, we introduced the option for customers who were eligible for our transition support payment [for customers who joined the scheme before 2014] to receive a lower payment in return for retaining the vehicle for up to 26 weeks.

“At the time we believed that this would be sufficient for any customer to complete their appeal.

“If a customer has chosen to pursue an appeal and this has not been completed within the 26 weeks then, provided we are satisfied that the appeal is actively being pursued, we will provide a further discretionary extension to the retention period so the appeal can be completed.”

Motability Operations said the bulk of the £100 million it will be spending itself will go on direct payments to customers, with most of it to be spent on the good condition bonus that customers receive if they return their car in good shape at the end of their three or five-year lease.

The chairs of the two Commons committees that have held the organisations to account with their inquiries and public evidence sessions welcomed the new funding but said that Motability Operations still had more to do.

Nicky Morgan, the Conservative chair of the Treasury committee, said: “As our committees have concluded recently, Motability Operations’ significant financial reserves are difficult to square with the honourable objectives of the scheme.

“Last week’s announcement by Motability Operations – that it will release £370 million from its reserves to support customers and disabled people with mobility needs – is good news for members of the scheme.

“Motability Operations must now ensure that its customers will benefit from this either in the form of lower prices or more generous vehicular adaptations.”

Frank Field, chair of the work and pensions committee, said: “At long last and after months of chivvying by our committees and the NAO, Motability Operations has begun to accept that it can’t just sit there on piles of reserves built up thanks to the taxpayer’s unique support.

“That’s most welcome, but is only a first step. There is still a way to go before we are satisfied that Motability is even beginning to make the best use of its vast funds and privileged position, to provide the best possible service for disabled people.”

*The charity Motability is a DNS subscriber 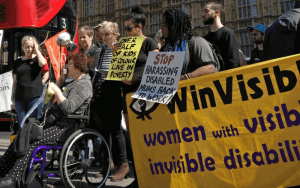