You are here: Home / Benefits and Poverty / MPs hear of ways to save benefit claimants from harm… or even death 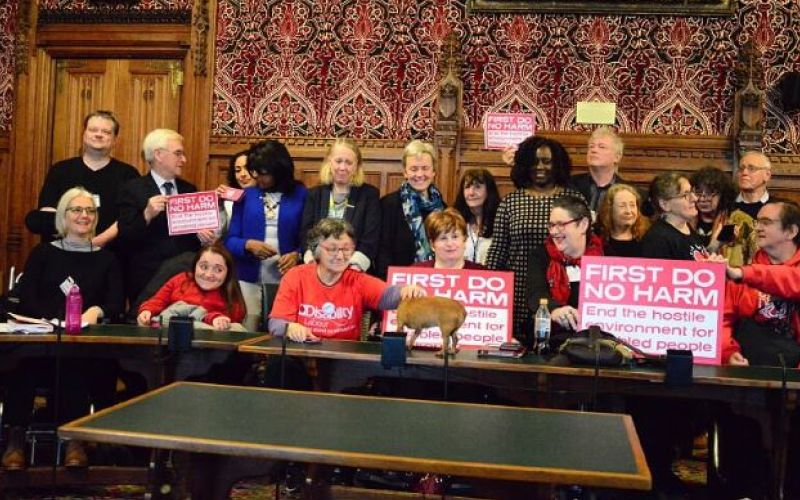 Disabled activists and shadow ministers at a parliamentary meeting have been told of ways they could help to reduce the appalling damage caused by the government’s hated “fitness for work” assessment and other social security cuts and reforms.

Academics, researchers, politicians and campaigners spoke at yesterday’s (Thursday’s) meeting (pictured), which was hosted and organised by Labour’s shadow chancellor John McDonnell as part of a lobby of parliament.

The First Do No Harm lobby focused on the continuing refusal of ministers to ensure that sufficient medical evidence is gathered before decisions are made on claims for out-of-work disability benefits, particularly for people with mental distress.

Years of research has shown that deaths of claimants have been closely linked to the failure to ensure this further medical evidence is obtained.

A series of speakers described the continuing harm – including deaths – caused to disabled people by the work capability assessment (WCA) process and the sanctioning of claimants.

Labour shadow ministers said they would shortly be launching a consultation on designing a new social security system that has “respect at its core and treats people with dignity”.

But two speakers also suggested that there was crucial short-term action that could be taken to save the lives of disabled people before any change of government.

Dr Carty said he often includes a written warning at the bottom of the Med 3 form that GPs must fill out when someone is not well enough to work – known as the fit note – that the patient would be “at substantial risk of a deterioration in their physical and/or mental health” if found fit for work or work-related activity after a WCA.

He said he adds: “If a decision is made not to award this claimant benefits and there is a significant adverse outcome I will report the medical decision maker to the General Medical Council.”

He has to take this step because there is no other system in place to do so, he said.

He added: “I have lost count of the numbers of evictions [and] drug and alcohol relapses whilst in recovery and medical catastrophes related to adverse benefit decisions.”

Dr Carty said that both the Med 3 form and the claim form for out-of-work disability benefits should be amended to ask the claimant’s GP directly – in every case involving a sick or disabled claimant – if there would be a substantial risk of harm if the claimant was found fit for work or to be able to carry out some work-related activity.

McArdle told the meeting that this was a human rights issue that “ought in a civilised society to transcend all forms of party politics” and that MPs needed to work on a cross-party basis to introduce such a change.

He hopes this change could now come through pressure from an early day motion and a private member’s bill.

He told the meeting: “I don’t think anybody reasonably can deny the direct link between the WCA and people dying in destitution and from suicide.

“We need to work together to get more than half of these MPs to say enough is enough. This must happen.”

Rick Burgess, of Greater Manchester Coalition of Disabled People and Recovery in the Bin, detailed four ways in which campaigners could immediately save lives and reduce some of the harm being caused to disabled benefit claimants by taking action at local level.

The first, he said, was to talk to local Department for Work and Pensions (DWP) and jobcentre area managers, and MPs, councillors and council officers, about sanctions that have been imposed and “see what wiggle room there might be” to reduce or remove them.

Secondly, campaigners can put pressure on local councils not to cut their welfare assistance schemes – if they still exist – and can raise awareness of such schemes.

A third measure, he said, was to provide and raise awareness about advice and advocacy, help people to record their benefit assessments, and accompany them to their assessments and appeals.

He said that recording benefit assessments, where possible, was the “single best thing to improve the quality of the assessment” because the assessors then “feel less free to defraud you”.

He said: “The tip of the spear of the DWP assault on us is the assessments.

“If you get people helped at the assessment stage you may be saving them from a lot more trouble down the line.”

And, he said, as a result of council tax benefit cuts there now needed to be more joined-up work on “how to deal with the council tax you can’t pay”.

Burgess also said there was no assessment phase under the new universal credit benefit system, so people who were not able to work were now being sanctioned while waiting for their WCA, or their claims were being closed.

He said: “In Manchester, we have had examples of people in a psychotic crisis expected to attend work interviews.”

They fail to attend, are sanctioned, lose their flat and end up living on the street, he said.

Again, he said, jobcentres can be approached to use their discretion to waive universal credit sanctions as a harm reduction measure.

Gill Thompson told the meeting how her brother David Clapson had died in July 2013 from an acute lack of insulin, three weeks after having his jobseeker’s allowance sanctioned.

Because he had no money, he couldn’t afford to pay for electricity that would have kept the fridge where he kept his insulin working, in the height of summer, and he had also run out of food. He had just £3.44 left in his bank account when he died.

She told those at the meeting, some of whom were close to tears: “David should not have been sanctioned. They say that sanctions are a last resort, but he missed two meetings and he died.

“What upsets me more is that people are still dying.”

Thompson said: “He was struggling and he turned to the state for help and he didn’t get any.

“I just don’t understand how this can happen. Sanctions should not be allowed.

Denise McKenna, from the Mental Health Resistance Network and Disabled People Against Cuts, said there were a “whole host of reasons” why self-reporting your own medical evidence as part of the WCA process was difficult for people with mental health problems.

She said society was now seeing a similar abuse of psychiatry to the gay conversion therapies practised in the 1960s and 70s.

McKenna said: “All of the treatments that are available are based on the idea that you are responsible for your mental distress and if you behave well enough and you try hard enough you can get better.

“It’s just as damaging as what happened to those gay men in the 60s and 70s. It’s despicable.

“We cannot have people who are both terrorised by the DWP and the psychiatric system.”

Catherine Hale, lead researcher and project manager of the Chronic Illness Inclusion Project (CIIP), and a member of the Spartacus Network, told the meeting that the hostile environment that had led to disabled people being viewed as “objects of hostility and distrust” was not accidental.

She highlighted how its origins lay in the writings of Gordon Waddell and Mansel Aylward, who advised insurance companies and governments on ways to cut pay-outs to sick and disabled people, as she said had been demonstrated by another disabled researcher, Mo Stewart.

Hale said: “According to them, the only way to get us out of our self-imposed ill-health is through compulsion and punishment, also known as sanctions.

“The first thing we need to do to overturn the hostile environment is to call out and reject these theories.

“We no longer allow scientists to say that homosexuality is a psychiatric condition or that some races are less intelligent than others, so let’s root out this so-called science that says that disabled people are liars and cheats.

“Stop designing assessments that treat us as guilty until proven innocent.”

And she told the meeting: “Let’s move away from the mantra that says that paid work is the only valid route to being a good citizen in our society.”

Mark Harrison, from the Reclaiming Our Futures Alliance, said that disabled people needed to be “in the lead” in co-producing Labour’s new policies ahead of a Labour government.

But he said each policy needed to be assessed on whether it complied with the UN Convention on the Rights of Persons with Disabilities (CRPD), in a process that should be led by disabled people.

Dr David Webster, an expert on benefit sanctions from the University of Glasgow, delivered a briefing on his work, which argues against sanctions and conditionality for sick and disabled benefit claimants.

He said that Waddell and Aylward’s work had been “quite clearly intended to soften up opinion so as to prepare the ground for the introduction of ESA**-type provision”.

He added: “The campaign since 2008 to drive sick and disabled people into work through conditionality [such as sanctions] has failed but it has caused a lot of collateral damage.

“It never had any proper evidence base.”

McDonnell called for a rolling programme of lobbying MPs in their own constituencies about the harm being caused to disabled people to ensure that “we are not allowing MPs not to become aware of what is happening within their area”.

He said some MPs only began to appreciate the impact of the government’s reforms once they were confronted with the reality of what was happening in their own constituency and perhaps being introduced to someone who had been sanctioned.

He said the impact of universal credit on all MPs’ constituencies was “brutal”, while the ESA process was “pushing people to the edge”.

He said: “The sanctions regime is still there and people being hardest hit are disabled people and particularly those with mental health issues.”

But McDonnell said he thought people were finally waking up to “the scale of the suffering that’s gone on”, and he said that the work of disabled researchers and campaigners like Hale, Stewart and McArdle was “academically and intellectually unchallengeable now”.

She said the current assessment regime was “cruel” and “not fit for purpose”, and she added: “People should view the social security system in the same vein as they view the NHS because the welfare state was introduced as a safety net.”

Margaret Greenwood, the shadow work and pensions secretary, said there needed to be a “sea change in the way in which disabled people are treated and we want a social security system that has respect at its core and treats people with dignity.”