You are here: Home / Benefits and Poverty / MPs raise concerns with McVey over ‘stress and poverty’ caused by WRAG cuts 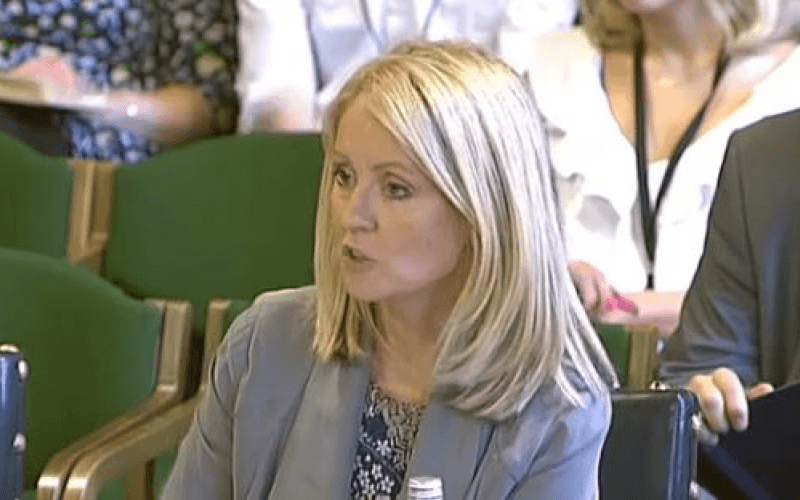 Cross-party MPs have raised a series of concerns with work and pensions secretary Esther McVey about the government’s treatment of disabled people on out-of-work benefits.

Members of the Commons work and pensions select committee were questioning McVey (pictured) more than a year after her government introduced cuts of nearly £30 a week to payments to new claimants of employment and support allowance (ESA) placed in the work-related activity group (WRAG).

Ministers were ridiculed when they first announced the cuts and argued they would “incentivise” those in the WRAG to find work.

Claimants placed in the WRAG have all been found able to carry out some work-related activity but have been found not fit for work.

The minister for disabled people, Penny Mordaunt [now the international development secretary], later promised to find a way to cut the living costs of people in the WRAG and “mitigate the £30”.

But by the time the cuts were introduced, in April 2017, the Department for Work and Pensions (DWP) appeared to suggest that Mordaunt’s only success on living costs had been to ensure that new WRAG claimants would be told by their jobcentre work coaches how to secure the cheapest BT telephone tariff.

Yesterday (Wednesday), SNP’s Chris Stephens asked McVey what work had been done to look at the additional costs faced by WRAG claimants.

But she did not appear to have an answer and claimed instead that the cuts had been aimed at sick and disabled people who could “definitely do some work” and had allowed her department to invest more funds into supporting them into jobs.

Stephens said the committee had received “a lot of witness evidence” that the cuts were “increasing stress and poverty for people in the WRAG” and had provided a “disincentive to get to work”.

He said: “There’s a very real concern that people are moving into hardship if they are on ESA in the WRAG.”

McVey said DWP was “testing and ensuring people aren’t going into hardship” but that its “focus” was to get those in the WRAG into work.

She claimed that the proportion of families that included a disabled person and were living in absolute poverty had fallen since 2010.

Tory MP Heidi Allen raised concerns about disabled people who claim the new universal credit and face the possibility of strict benefit conditions – such as being forced to carry out hours of job searches every week – as they wait for a work capability assessment.

James Wolfe, DWP’s director of disability employment and support, said work coaches had “discretion” to make changes to conditionality for disabled people in this position.

But asked by Allen if the work coaches making these important decisions about whether a claimant was well enough to meet these conditions were “health care experts”, he said instead that they were “skilled in knowing what someone can do and what the best steps are for them to get back into the labour market”.

He added: “We are looking very closely at the whole health journey in universal credit.”

He said there were not yet large numbers of people with health conditions coming onto universal credit so DWP was still “testing and learning, very carefully deciding who we might want to apply some conditionality to and then looking at what happens before those large numbers start coming through”.

Asked by Allen what options DWP was looking at to ensure that not everyone was treated the same, he said: “The instructions our people have is very much to be cautious about this at the moment.

“This is something that is going to evolve over a period of time as we start to get the numbers through. We are looking at it very closely.”

But Allen said the committee was hearing of too many cases in which “discretion is not being fairly applied”, and she said: “I just worry. We have to get it right.”

A previous session of the committee in May had heard from one disabled claimant of universal credit who told MPs how he had been sanctioned by DWP after missing a work-related meeting in a week in which he had been hospitalised twice because of multiple seizures.

Labour’s Neil Coyle told McVey, and Sarah Newton, the minister for disabled people: “In order to get more disabled people into work, there has to be trust with the department and with jobcentres in particular.”

He told them that disabled people had seen DWP cut support for half a million claimants of disability living allowance in the move to the new personal independence payment.

And he said that half a million disabled people were set to lose out financially in the move to universal credit, and that there had been a cut in the number of disability employment advisers, problems with Access to Work, and increased pressure through benefit sanctions and inaccurate disability benefit assessments.

He asked what efforts ministers had made to assess the cumulative impact of all these cuts on disabled people’s ability and readiness for work.

He added: “What I don’t accept is the sort of caricature of the department as being somehow the enemy of disabled people.”

Coyle replied: “I can only go on my surgery [for constituents] and the feedback we have had here. It’s about trust.

“The question is what assessment has been made of that impact of the changes on disabled people’s preparedness for work.”

Wolfe suggested again that the cuts had led to an increase in the number of disabled people in work, telling Coyle: “The outcome is there in the disability employment statistics.”

McVey said an extra £9 billion in real terms had been spent on supporting disabled people and those with health conditions with benefits [since 2010] and that the number of disabled people in work had increased by 600,000 [between 2013 and 2017].