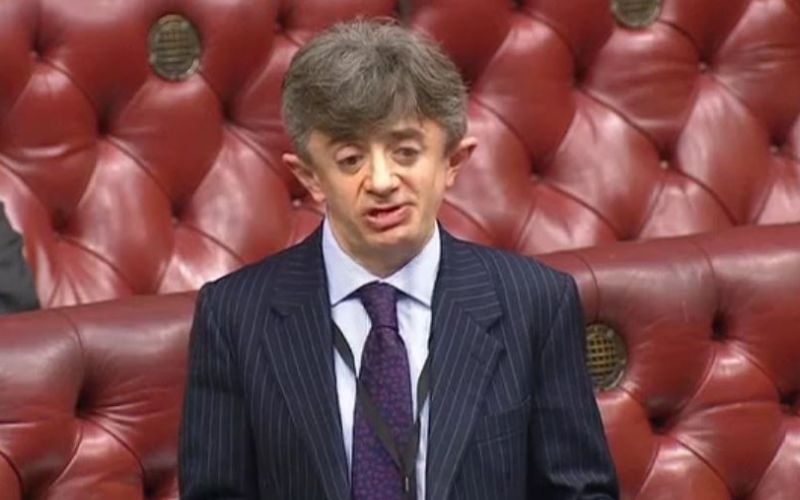 A disabled peer who thought he had been appointed as the next disability commissioner – only to be told the post had been abolished – has been left “astounded and offended” by his treatment by the Equality and Human Rights Commission (EHRC).

A stand-off has now developed between Lord [Kevin] Shinkwin and the commission’s chair, David Isaac, with the Conservative peer insisting that the post of disability commissioner must be re-established.

Lord Shinkwin (pictured) applied for the post of disability commissioner late last year and was appointed by the government in April.

But just 36 hours before he was due to attend his first EHRC board meeting, he was told by Isaac that he had been appointed only as a commissioner, and would not be leading on disability equality issues.

Isaac told him the role of disability commissioner had been made “redundant”.

Last month, Disability News Service (DNS) reported how the post of disability commissioner appeared to have been scrapped, after EHRC said Lord Shinkwin had only been appointed as a commissioner.

Two former disabled EHRC commissioners – Sir Bert Massie and Baroness [Jane] Campbell – said then that they believed that scrapping the role would make it harder for the watchdog to stand up to attacks on disabled people’s rights.

The commission refused last month to confirm that the role had been scrapped, why the decision had been taken, and who had taken it.

And only this week, the Government Equalities Office (GEO) refused to release any documents relating to the appointment and the decision to scrap the disability commissioner role – including legal advice obtained by the government – following a DNS freedom of information request.

GEO said releasing the information would “prejudice, or would be likely otherwise to prejudice, the effective conduct of public affairs”, while disclosing legal advice was “not in the public interest”.

But Lord Shinkwin has now spoken out to confirm that the role he applied for has been scrapped and to demand that the commission reinstates it.

His appointment came more than three months after the post was supposed to have been filled, following the decision of another disabled Tory peer, Lord [Chris] Holmes, not to seek a further term as disability commissioner.

The commission confirmed this week that Lord Shinkwin had only been informed that he would not be the disability commissioner 36 hours before he was due to attend his first board  meeting.

An EHRC spokesman said the commission had decided that Lord Shinkwin was “suitable to be appointed as a commissioner” but that the three-person panel which interviewed him – which included Isaac and a GEO representative – “concluded he did not yet have the specific skills and experience required for the disability commissioner role”.

He added: “As delays in the process meant that the statutory disability committee was dissolved before the end of the appointment process, in the event the board agreed that the role of disability commissioner is no longer required.”

When informed of this explanation by DNS, Lord Shinkwin said: “That is the first time I have heard that argument. I wasn’t told that. I think it’s absurd.

“Disability has already almost claimed my life. I have more experience than any of the panel who interviewed me on the challenges of living with a disability.

Lord Shinkwin said he had had three separate conversations with Isaac in the lead-up to the first board meeting after his appointment, on 11 May.

“I wasn’t able to attend the first board meeting because I felt my position needed to be clarified before I attended meetings.”

He added: “I don’t think it is possible to achieve real progress on disability equality unless… there is a sharp focus on disability and a true understanding of the unique barriers that we face. We are unique in my view.”

He made similar comments in a House of Lords debate on the report by the Lords committee on the Equality Act 2010 and disabled people last year.

He told DNS this week: “As a result of being unique we are the least powerful of the protected characteristic groups.

“That needs to be recognised and that is why I feel a disability commissioner is so important.”

He also does not believe that the commission’s new disability advisory committee – a downgraded version of its former statutory disability committee, which has just been scrapped – should be disbanded in two years’ time, in April 2019.

He said: “There should be a review before any decision is made.”

And he has told Isaac that he would like to chair the committee, so that it is led by a disabled person.

Lord Shinkwin said EHRC needed to “affirm that disabled people are in a unique position and the very least they need to do following the loss of the statutory status of the disability committee is to reinstate the position of disability commissioner”.

He said the decision to make the disability commissioner role redundant was because of the approach of senior people at EHRC.

He said: “I think this is the fault of certain people at the commission pursuing what they think is a universalist approach to equality [one which fails to take account of the particular barriers disabled people face], which I don’t think is working in the best interests of disabled people.”

He is now waiting for Isaac to respond to his letter describing his concerns, and he is due to speak about the situation in the House of Lords today (Thursday).

But he said: “I am not about to throw in the towel. I have written to the chair. I have restated that I do not accept the abolition of the post.”

Lord Shinkwin also said that he did not believe the government had played a part in the decision to scrap the role of disability commissioner, and that he had not discussed the issue with the minister for women and equalities, Justine Greening.

He said: “I don’t see this as something the government should become involved in.

“This is in my view between disabled people and myself, as a disabled person trying to champion disability rights, and the chair of the commission.”

An EHRC spokesman said the decision to “move away from having a named disability commissioner” was taken by the EHRC board.

He said: “Rather than having just one named champion of disability rights on the board, all board members, including a number of disabled commissioners and others with direct experience, will have a responsibility to champion disability issues.”

He said that one other board member, Caroline Waters, had been named in a list of the UK’s most powerful disabled people, but the commission would not say how many other members of the board were disabled people “for privacy reasons”.

He added: “The work of the board will be structured around domains, looking at every area of people’s lives including healthcare, education, work and living standards, to ensure that we are tackling the root causes of the injustices that still exist in our society.

“We believe that this allows our board to work in a more strategic way, looking across domains at issues that may affect more than one group and understanding where different protected groups are disproportionately affected by a particular policy or practice.

“This way of working will allow us to have more impact in tackling disability and reflects the fact that many of the people that we exist to support will have multiple protected characteristics and identities.”