You are here: Home / Arts, Culture and Sport / Osborne shares ‘discriminatory’ cartoon ‘that breaches his own code of conduct’ 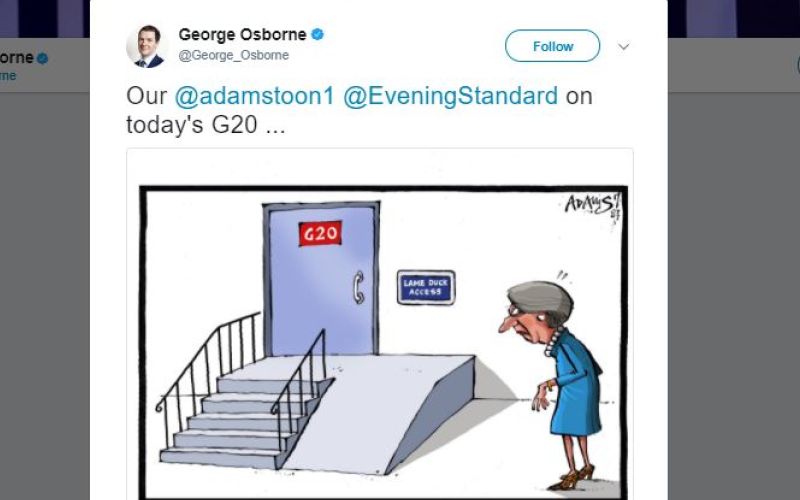 London’s evening paper, and its editor, former Tory chancellor George Osborne, have been accused of showing a “deep disrespect” for disabled people after publishing a “disgusting” cartoon that compared being a wheelchair-user with being powerless and incompetent.

The London Evening Standard cartoon showed the prime minister, Theresa May, approaching the “lame duck access” entrance to the G20 summit, which had a wheelchair ramp.

Anger at the cartoon on social media was heightened by it being shared on the social media platform Twitter (pictured) by the newspaper’s editor, George Osborne, who was chancellor for more than six years from 2010 and responsible for implementing significant cuts to disabled people’s benefits and services.

After disabled people on social media described the cartoon as “deeply offensive”, the cartoonist, Christian Adams, said on Twitter that he “meant no offence on that level” and had been making “a political point”.

But Chris Stapleton, a wheelchair-user who lives in London and is a regular Standard reader, told Disability News Service (DNS) that he was “disgusted” by the cartoon.

“This association is inseparable from the insulting idea that ‘wheelchair user = powerless, feeble, incompetent and ineffectual’.

“Wheelchair users are nothing of the sort. The fact that we use wheels to get around does not turn us into lame ducks.

“Would the cartoonist have dared to use, for example, a racist joke to convey his political point?

“Society is gradually getting the message that picking on, mocking and laughing at black people, gay people, Jewish people, Muslims, and many other minorities is absolutely not acceptable.

“But, as this cartoon clearly shows, there is still a feeling that picking on, mocking and laughing at disabled people is fine. This has got to stop now! It is emphatically not fine.”

Disability activist Alice Kirby was also appalled by the cartoon.

She said: “I’m utterly disgusted that this cartoon was published.

“Not only does it imply disabled people are weak and impotent, it aims to insult Theresa May by likening her to a disabled person.

“Furthermore it’s a clear breach of the Evening Standard’s own code of conduct, which prohibits both discrimination and pejorative references to disabled people, something I’d have thought George Osborne would have been aware of, given his position.”

Labour politician Pam Thomas, a member of Liverpool City Council and herself a wheelchair-user, told DNS: “The cartoon itself and George Osborne retweeting it, show a deep disrespect toward disabled people.

“This level of disrespect is so much a part of our culture that they probably haven’t even realised how it can contribute to an environment where disabled people are excluded, viewed as not equal citizens and targeted for hate crime.”

She said that the progress towards equality made under the last Labour government was “swept aside as if [it] had never happened” after 2010, while Osborne was chancellor, and with it “went financial life support for disabled people, funding for our organisations and academic research into disablist practices.

“So in some ways we shouldn’t be surprised that Osborne is clueless about how disabled people have to fight every single day against exclusion and discrimination.”

Doug Wills, the Standard’s managing editor, said in a statement: “We are sorry if the cartoon has upset some readers.

“It was certainly not the aim of our cartoonist for his drawing to be interpreted this way.”

But he refused to say if Osborne and the newspaper understood why the cartoon was so offensive to disabled people. 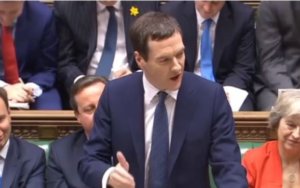 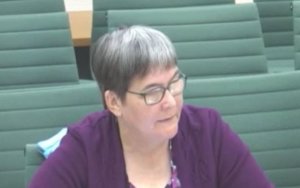 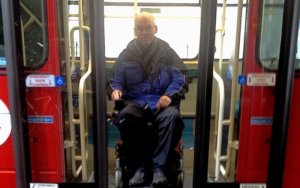 Disabled passenger forced to wet himself on train, months after minister pledged action