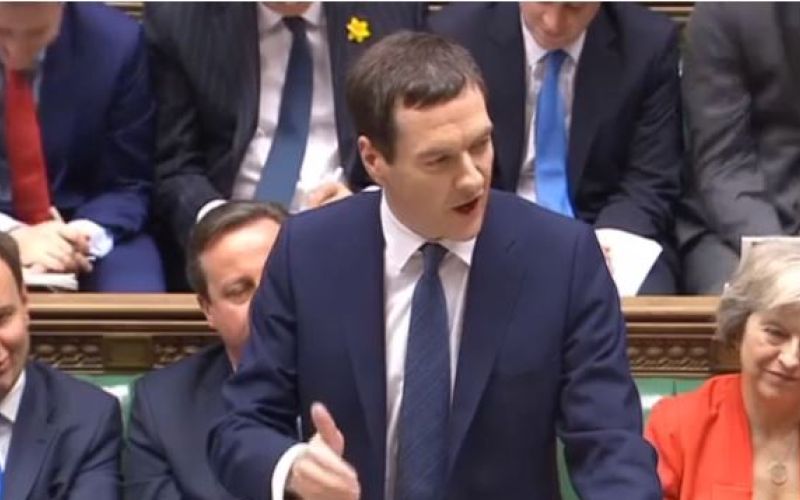 Disabled campaigners have been left bemused and concerned by a report from an independent fiscal watchdog which shows the government’s introduction of personal independence payment (PIP) has led to a sharp rise in spending on disability benefits.

Tory chancellor George Osborne (pictured) announced in 2010 that the new coalition government planned to cut spending and the number of claimants on disability living allowance (DLA) by 20 per cent by introducing a new working-age benefit.

But instead of leading to a fall, the introduction of personal independence payment (PIP) from 2013 has instead led to accelerated growth in benefits spending, said the Office for Budget Responsibility (OBR) in its annual Welfare Trends Report.

It said: “Disability benefits spending has risen faster than anticipated despite reform aimed to reduce it.

“The transition to PIP was intended to save 20 per cent relative to DLA remaining in place, but appears to have cost around 15 to 20 per cent more.”

There were concerns this week that these figures could prompt the government to attempt to tighten eligibility for PIP, with the Department for Work and Pensions (DWP) refusing to say if ministers were considering such a move.

Disabled activists, including those who have campaigned to raise awareness of the unfairness of the PIP regime, have this week been left bemused by the report.

Hundreds of thousands of disabled people have lost support under the move from DLA to the new PIP regime, but they appear to have been outnumbered by the number of successful new claimants.

According to the OBR report, spending on disability benefits – PIP, DLA and attendance allowance (for older people) – continued to rise steadily between 2013-14 and 2017-18, with a rising proportion of the working-age population receiving either DLA or PIP.

One explanation for the unexpected increase is that the rise of the internet and social media may have made it easier for disabled people to “navigate the system”, says the OBR.

The OBR has also had to explain why its spending predictions in earlier years were so inaccurate.

In December 2012, it predicted that moving to PIP would save £2.9 billion a year by 2017-18 and that introducing PIP would see a reduction in the number of claimants of 28 per cent by May 2018 (compared with what this number would have been under DLA).

The report produces a series of explanations for this failure.

Another explanation for some of the rising spending is the string of successful legal actions taken against the government, which have led to more claimants being entitled to PIP, and more receiving higher rates of the benefit.

The report says: “There is clearly a risk that future legal challenges to the Government’s interpretation of benefits legislation could expand coverage of the system further, increasing caseloads or average awards.”

And it suggests that there is substantial potential for even higher growth in the number of claimants, adding: “The available data suggest there is likely to be a much larger number of people eligible for disability benefits than currently claim them, giving considerable scope for future growth in the caseload through higher take-up.”

Marsha de Cordova, Labour’s shadow minister for disabled people, said: “The introduction of PIP saw DLA support cut for hundreds of thousands, thousands of people with mental distress unlawfully discriminated against and assessments which wrongly deny disabled people social security. And for what?”

Disability News Service (DNS) spent months investigating allegations of dishonesty at the heart of the PIP assessment system, hearing eventually from more than 250 disabled people in less than a year about how they had been unfairly deprived of PIP.

It continues to receive such reports today, more than two years after the investigation began.

In one case – revealed by a secret recording – a nurse failed to mention a disabled woman’s near-fatal asthma attacks, accidental overdoses and repeated blackouts in her PIP assessment report.

Earlier that year, DNS reported unpublished DWP figures which showed that nearly half of disabled people subject to “planned reviews” of their eligibility for PIP were having their existing award either cut or removed completely.

Other DWP figures from 2017, obtained by Disability Rights UK (DR UK) showed that fewer than half (about 126,000) of the 254,000 people previously receiving the higher rate mobility component of DLA secured the same level of mobility support when reassessed for PIP.

Disabled People Against Cuts (DPAC) were among the disabled activists surprised by the OBR report, following years of research and hearing personal testimonies that showed how disabled people have been unfairly deprived of support as a result of the introduction of PIP.

A DPAC spokesperson said that, although more people are receiving PIP than DLA, they have to “go through more hoops” to do so.

She said OBR and DWP had “overestimated the savings” and this had been “driving the denial of PIP to many claimants”.

DPAC said there would now be “concerns, as always, that changes will be made to limit the number of people eligible for PIP”.

Stef Benstead, a disabled researcher and member of the Spartacus Network, said she believed the higher volume of PIP claims was “because the new benefit was publicised and discussed in a way that older benefits, like DLA and ESA (employment and support allowance) aren’t”.

Many of those who had had DLA claims rejected may have thought it worth applying for PIP, particularly those with mental health conditions and high support needs, she said.

And Benstead said the underlying problem was that the government did not understand disability.

She said: “They have grossly underestimated the severity of the functional impact of chronic illness and disability; falsely believe that disability reduces over time; and wrongly think that disability is largely a simple matter to determine.

“They simply didn’t realise how many people are severely disabled and how long that disability persists, so they underestimated how many people would be in receipt of PIP.”

Despite the OBR figures, she believes that PIP does not capture the extent of disabled people’s disability and that award rates are too low, “particularly for mobility problems, domestic tasks, and remaining safe and as healthy as possible”.

Ken Butler, welfare rights and policy officer for DR UK, said: “The OBR’s findings will feel like a kick in the teeth to the many thousands of disabled people whose incomes, independence and physical and mental well-being has been blighted by PIP.

“Those hardest hit by austerity have been disabled people and this has been a deliberate result of government policy.

“PIP is not just failing those disabled people deliberately excluded by its severe eligibility restrictions.

“It is also failing those disabled people who are wrongly being refused entitlement to it.

“Over 70 per cent of PIP (and ESA) appeals are found in favour of the claimant.

“What the government needs to do is completely overhaul the flawed PIP system and replace it with one that identifies the true extra costs of living with disability.”

The Benefits and Work website added: “Once again a cost cutting reform has proved to simply be an expensive exercise in creating avoidable misery.

“It happened with employment and support allowance, it has now happened with personal independence payment and it will happen with universal credit too.”

A DWP spokesperson declined to say whether ministers were happy with the figures showing a rise in spending, rather than the intended cut; whether they would take steps to tighten eligibility for PIP; or what lessons ministers drew from the report.

Instead, she said in a statement: “Our priority has always been to ensure disabled people get the support they’re entitled to.

“PIP is designed to focus support on people with the greatest needs and that’s happening, with 31 per cent of people getting the highest level of support, compared to 15 per cent under DLA.

“As with any major new benefit we have been flexible and adapted our approach, and we continue to make improvements to ensure PIP is working in the best way possible.”