You are here: Home / Benefits and Poverty / PIP figures fuel concerns over cuts, while activists plan day of action 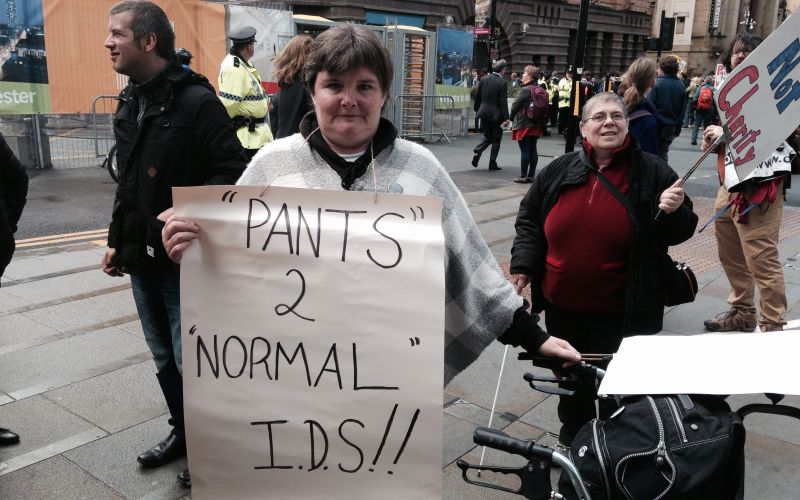 Only about seven in 10 disabled people who were previously claiming disability living allowance (DLA) are being found eligible for the government’s new disability benefit, official figures have revealed.

The Department for Work and Pensions (DWP) figures show that just 71 per cent of DLA recipients who applied for the new personal independence payment (PIP) were successful with their claim in April 2016, once withdrawn claims were excluded.

This is a substantial fall since the government began to roll out the new benefit to existing DLA claimants in early 2014, when 80 per cent of DLA claimants were successful.

The figures were released as disabled activists announced a National Day of Action Against PIP next month, to draw attention to what they say is a system that is “rotten to the core”.

These numbers are likely to rise slightly once the impact of successful appeals is taken into account.

But the DWP publication suggests that the success rate is also likely to fall further, as the document says that “a problem with the PIP computer system” between February and April this year meant the award rates for new claimants were higher than they would otherwise have been.

It is just the latest in a series of problems with the PIP computer system, which has repeatedly crashed since its introduction.

In the two months before the computer problems emerged, the PIP success rates for new claimants were as low as 36 per cent, in December 2015, and 38 per cent, in January 2016.

This compares with about 42 per cent of new DLA claimants who were successful in 2009-10, although those figures included under-16s.

Although it is not possible to draw clear conclusions from the latest release, the figures do suggest that the government could be on track to fulfil its threat to cut the number of working-age claimants of DLA/PIP by at least 20 per cent, a pledge first made by the coalition in the summer of 2010.

The national day of action – organised by Disabled People Against Cuts (DPAC), the Mental Health Resistance Network and the disabled women’s organisation WinVisible – will take place on Wednesday 13 July.

A central London event will take place outside the offices of Capita, one of the two outsourcing giants that carries out PIP assessments (the other is former “fitness for work” contractor Atos).

Other actions are already planned for Ipswich, Leicester, Glasgow, Sheffield, Manchester, and Vauxhall, south-east London, although the organisers hope further actions will take place at other PIP assessment centres across the country.

Paula Peters (pictured), from DPAC, said the day of action would highlight the “appalling sham assessments” that are carried out by Atos and Capita, which are making “vast amounts of money” from their contracts, and the “horrendous degradation that disabled people are being put through”.

She said that DPAC and other grassroots groups were hearing from a “great number of disabled people” who have said that the health professionals who assessed them for their PIP eligibility produced “an absolute load of lies” in their assessment reports.

She said that both new PIP claimants and former DLA claimants being reassessed for PIP were being caused “huge anxiety, stress and concern”, with “horrendous” numbers of people having to hand back their Motability vehicles after being reassessed, because they no longer qualified for the upper, or enhanced, mobility rate.

She said: “We want to tell the government we are incredibly concerned about this. This has been long overdue.

“It is a devastating amount of people who will lose their entitlement to care and mobility [support].

“It is massively important for disabled people if they can to attend the day of action [there will also be online actions for those not able to attend in person] and just say enough is enough.”

Despite welcoming the government’s U-turn on further cuts to PIP, after the resignation of work and pensions secretary Iain Duncan Smith in March, Peters said she and others believed that those cuts would be re-introduced by ministers.

She said DPAC wanted Atos and Capita to lose their contracts, with assessments instead being carried out in-house by DWP, and for the government to restore DLA in place of PIP.

Peters said that she and other disabled activists were “shattered” after “six long years of just continuous fighting against this government on every single service and every single benefit we need”.

She said: “If we don’t highlight what’s going on and how disabled people are affected by this, who else will do it? We don’t have anybody else standing up for us.”

She appealed for disabled people to come forward with their experiences of PIP, employment and support allowance and cuts to social care, and pass them to DPAC through its website.

Peters said: “We really do need those stories. People’s personal testimonies are the most important thing that anyone can give.”

Claire Glasman, from WinVisible, said PIP had been designed as a “massive cut in benefits”, and the way it had been introduced was “really, really brutal”.

She said: “It is impoverishing people, trapping people in their homes, making their lives a misery.

“We have no confidence that people’s situations are being properly assessed.

“There were problems with DLA as well but that was a lot more responsive to people’s situation.”

Glasman said campaigners believed that Atos and Capita had a financial incentive to force people to undertake face-to-face assessments.

She said: “We think people are very, very angry and concerned and will want to have their say. We can make a difference if we get together. This is a chance to make a splash.”

Glasman described the PIP assessment problems faced by one woman, a rape survivor, who was currently being supported by WinVisible.

She said: “She was very, very anxious about having a home visit. We got the home visit cancelled and asked for her case to be looked at on paper.

“But because the home visit had been cancelled, they stopped her claim and cut off her DLA payments because her PIP claim had been stopped.

“They also suspended her employment and support allowance (ESA).

“With our help and encouragement, she was able to get the ESA back, but we are still battling on the DLA, and have finally got Atos to do a paper assessment.”