You are here: Home / Activism and Campaigning / Police targeting of disabled protesters is ‘an outrage and a scandal… and it’s set to spread’ 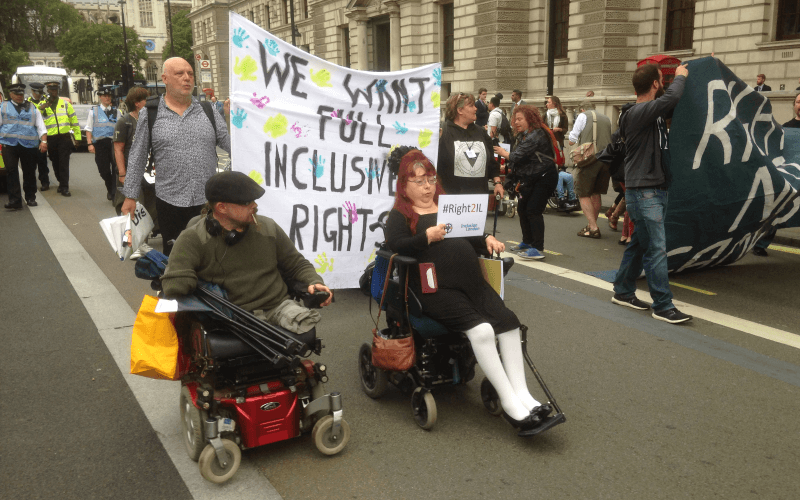 The targeting by police of disabled people involved in peaceful anti-fracking protests is an “absolute outrage” and “a scandal”, but such tactics will soon be rolled out to other protests and other parts of the country, a leading activist has warned.

Andy Greene, a member of the national steering group of Disabled People Against Cuts (DPAC), spoke out as Disability News Service (DNS) revealed “extremely disturbing” evidence that police forces in England have been repeatedly targeting and assaulting disabled people involved in the protests (see separate story).

Some of the most serious concerns reported this week relate to the actions of officers from Lancashire police in dealing with peaceful protests about the drilling activities of the energy company Cuadrilla near Preston New Road, on the edge of Blackpool.

Greene, a veteran of numerous peaceful anti-austerity street protests with DPAC (pictured, left), said the evidence reported by DNS was “extremely disturbing” and the police behaviour “an absolute outrage”.

DNS has seen video footage of a string of incidents in which disabled campaigners taking part in peaceful protests have been injured, manhandled or put at risk of injury by police officers.

It has also spoken to three disabled protesters, and two other eye-witnesses, who have all experienced or witnessed serious and repeated incidents of police brutality targeted at disabled people.

There are now fears that forces across the country that have policed anti-fracking protests are developing a tactics “template” that can be used to target disabled people taking part in other peaceful protests, such as those organised by the anti-cuts and climate change movements.

Greene said: “It is an absolute outrage and a scandal that [police officers] are not just perpetrating this but getting away with it on a daily basis now.

“It isn’t an isolated incident, it isn’t a one-off, this isn’t one force, this is an escalation over a period of time with a clear direction of travel and involves many, many forces and it’s clear that there is a bigger strategy out there.”

He said he had seen an “escalation” and a “clear direction of travel” in police tactics since the anti-fracking protests at Balcombe, in Sussex, in the summer of 2013.

He said he had been disturbed by what he had seen at Balcombe, but that there had since been a “scale up” of such tactics with the policing of the anti-fracking protests at Barton Moss, near Manchester, in late 2013 and early 2014, while what was being seen at Preston New Road was “an escalation again from Barton Moss”.

Greene said: “The on-the-ground tactics are becoming more physical, they’re becoming more confrontational, more provoking, and I think there is a real strategy behind that.”

He said he now expected these police tactics to be “rolled out across the protest movement” over the next year as the country sees a likely increase in political volatility around issues such as anti-fracking, anti-austerity and Brexit.

He said he believed it was “only a matter of time” before the tactics being applied to disabled people at Preston New Road were seen on the streets of London.

He said: “I think they are very careful about where they do it and more particularly where they don’t do it at the moment.”

He believes the police have been using the rural locations of anti-fracking protests as a training ground and “the gloves will come off” in London once they are more confident about their ability to translate what they have learned to “bigger scale” protests in London.

Greene said the barriers facing disabled people attempting to have their voices heard in anti-fracking protests reflect the discrimination they face in other areas of political activity.

Party political activity is often not accessible, while voting is not accessible and polling booths are “an absolute national scandal”, he said.

He said: “If it was any other community that was shut out of having their political voice heard like this there would be complete and utter uproar.”

“What shouldn’t be happening is state institutions using violence and other means to exclude disabled people from getting involved in political discourse.”

But he urged disabled people not to be put off by what they were hearing of police tactics.

“This should be something that makes us shout louder and be more persistent about what we want.”

Greene said there needed to be “a bigger conversation with the anti-fracking movement about how we deal with this” as well as “a show of support” for those disabled activists who have been targeted.

He said protest movements needed to work together with organisations like NETPOL, which monitors and resists excessive, intimidating or violent policing, to “develop some form of plan for supporting ourselves to deal with this and push back against it”. 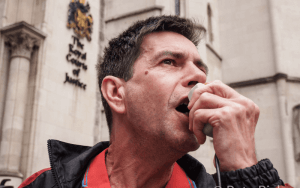