An independent watchdog has upheld an appeal by the family of a young autistic man who say he faced discrimination and mistreatment by a police force, months after it cleared another force of similar allegations.

The Independent Police Complaints Commission (IPCC) concluded three months ago that there was insufficient evidence to show misconduct by officers of Northamptonshire police who were involved in the arrest and detention of Daniel Smith.

But IPCC has now examined concerns about the way Smith was treated by Devon and Cornwall Police over a second arrest four months later, and how it investigated a subsequent complaint about the way he was treated.

Devon and Cornwall’s professional standards department cleared its own officers of any wrongdoing, after Smith’s family lodged a complaint, but IPCC has now decided that that may have been the wrong decision and has asked it to reinvestigate the complaint.

His family say both forces discriminated against Daniel, ignored him when he told them that he was autistic, failed to provide him with the support he needed – ignoring their own guidance – and breached his rights under the European Convention on Human Rights.

Smith was held in a cell for eight hours after he had defended himself from a vicious disability hate crime in a local park in Rushden, Northamptonshire, in October 2015.

He had been left bloodied and bruised by the attack but ended up being prosecuted for assault after the police failed to investigate the hate crime and charged him instead.

He spent eight hours in the cell, without medical treatment, even though he told officers he had only been defending himself against “the bullies”.

He was eventually cleared of assault charges by magistrates, following a six-month court ordeal.

But struggling with the trauma of his treatment over the Northamptonshire incident and following a distressing court hearing in February last year, he became involved in an incident with a young woman in his home city of Exeter, Devon, who had headbutted him after an argument.

He was arrested and locked up again, despite telling police he was suicidal and autistic. His family say that no appropriate adult (AA)* was provided for him.

His dad, Owen, said that a statement was taken from his son after several hours in the police station, by which time he was in “an appalling mental state” and “would have said anything to get released”.

Owen Smith said: “If the correct procedures had been followed for Daniel, a proper account could have been elicited from him, explaining the circumstances of the incident as regards his autism, the fact that he was acting in self-defence, why he reacted in the way he did.

“He was vulnerable, exhausted and scared.”

Daniel’s mental health subsequently deteriorated significantly, and he became so scared of being attacked yet again, following the Exeter incident, that he spent hundreds of pounds buying mini security cameras that he attached to his body.

In both the Northamptonshire and Exeter cases, CCTV evidence from the police station was destroyed before it could be examined by the forces’ professional standards departments.

Daniel’s family believe there were several officers from both forces who should have known that Daniel was autistic and failed to act on that information.

IPCC has now told the family that it is not satisfied with the internal investigation by Devon and Cornwall Police, and has asked it to reinvestigate.

It criticises the force for failing to secure the CCTV footage following his arrest, and has asked it “to review their processes to try to ensure that this does not happen in the future”.

It also reveals that the force possessed information dating back to 2012 that Daniel Smith was autistic.

The IPCC letter raises a number of other concerns about how he was treated in custody, including why officers accepted his statement that he did not want support from an appropriate adult.

It adds: “The decision about whether or not to call an appropriate adult is the custody sergeant’s, not the detainee’s.

“There is an inherent contradiction in asking a detainee whether one is required.”

The letter adds: “There are flaws, gaps and contradictions that have not been accounted for. A reinvestigation is required to explore these.”

Smith’s solicitor, Sarah Ricca, of Deighton Pierce Glynn, said: “The IPCC’s decision is the first ray of light in Daniel’s attempts to expose the injustice of how he has been treated by the two police forces.

“Daniel was failed by the police on the two occasions he was arrested and detained and till now he has been failed again by the complaints system.

“We hope that this will mark a turning point in taking seriously the issues his case raises about fair and equal treatment of people with autism by police.”

Disability News Service learned of the IPCC ruling yesterday (Wednesday) and has since been unable to contact a Devon and Cornwall Police press officer.

But a Devon and Cornwall Police spokeswoman said earlier, before the IPCC had delivered its ruling: “A complaint was received by a member of the public in 2016 relating to an incident on the 28th of February 2016 involving a 27-year-old man.

“The matter was referred to the Independent Police Complaints Commission (IPCC) who referred the case back to Devon and Cornwall Police to carry out a local investigation.

“Devon and Cornwall Police carried out the investigation, the outcome of which was appealed by the member of public.

“The appeal has now been referred to the IPCC for a decision.”

IPCC had not been able to comment by noon today (Thursday).

*An appropriate adult ensures “the rights, welfare and effective participation” of a child or “vulnerable” adult suspect who is being detained or interviewed by police 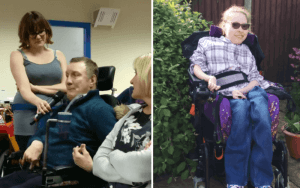 Coronavirus: Success for disabled duo after NHS England backs down on visitor policy

Coronavirus: Industry brushes off EHRC concerns over discrimination by supermarkets