You are here: Home / Housing / Protesters call for action from council after years of housing failures 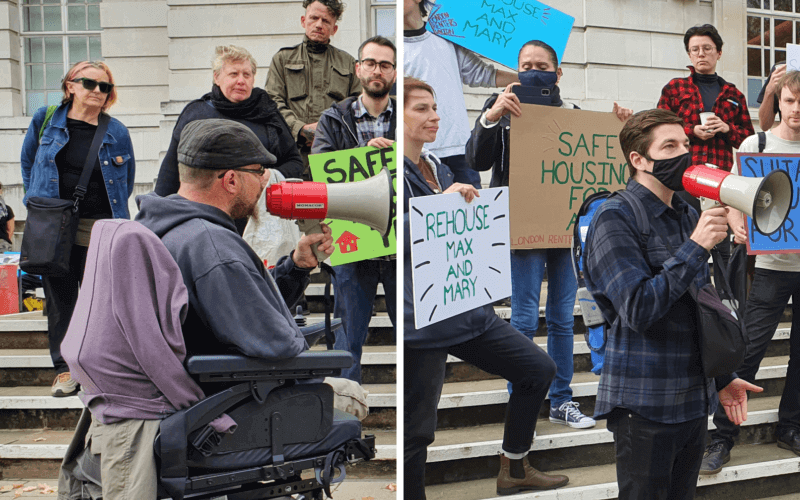 Protesters were outside a town hall this week to support a disabled man who has spent years being “ignored, insulted and patronised” by his local authority over the serious damage his council flat is causing to his health.

The protest was called by London Renters Union (LRU) in support of two disabled residents of Hackney, in east London, who have both experienced years of health problems linked to their housing.

The protest outside Hackney Town Hall was also supported by Disabled People Against Cuts (DPAC), with a DPAC activist drawing attention to the wider crisis in accessible housing.

One of the two disabled residents, Maxime*, told Disability News Service (DNS) earlier this year how he had been left with serious health problems because of the toxic mould that has spread across large parts of his fourth-floor flat.

He has been complaining about the black mould, damp and roof and wall leaks since moving into the flat in 2017, and he believes he developed the autoimmune condition sarcoidosis because of the mould.

A consultant has told him that the mould could have triggered the sarcoidosis.

The council knew when he moved in that he had long-term neurological conditions, mental distress and chronic pain, all of which have been worsened by his living conditions.

He has been told that he is at risk of lung complications because of the mould and damp.

There are also concerns about potentially toxic fumes that continue to leak into his flat.

Despite repeated concerns raised with the council, and requests to be rehoused, he is still living in the flat, which continues to affect both his physical and mental health.

A three-page letter detailing his ordeal and calling for an urgent transfer to a new flat, drafted by LRU – which describes the “health, disrepair, mismanagement and harassment issues” he has had to face over the last four years – was handed to the council during the protest.

His disabled neighbour Mary Walsh, who also lives on the building’s fourth floor, joined him at the protest.

A long-term resident of the building, she believes her chronic health conditions, including acute asthma, COPD (chronic obstructive pulmonary disease) and emphysema, have also been affected by her housing situation, particularly through pollution from nearby traffic, and the same fumes that are affecting Maxime.

She said the building’s lift can sometimes be out of order for months at a time, which can cause her serious problems because she cannot even climb two steps when she is particularly ill.

Mary (pictured above left, far left) told DNS that the protest “might be the only way they take notice”.

Maxime (pictured speaking, above right) said he was at the protest to ask the council to provide both of them with safe places to live.

He said: “I have tried to engage with the council for four-and-a-half years. I felt silenced, ignored, patronised, I have felt insulted, I have felt fobbed off, and nothing changes.

“I am in a perpetual state of damage and injury to my health.

“Today, with the help of LRU, I am hoping this damaging cycle will stop.”

Cllr Clayeon McKenzie, the council’s cabinet member for housing services, promised Maxime and Mary at the protest that the council would act on their concerns.

Among others supporting the protest were Green Party London Assembly member Zack Polanski and Dzaier Neil, national convenor of the Green Party’s disability group and co-equality and diversity officer on its national executive.

She said she was particularly concerned about how many local authorities were renting out accessible properties to non-disabled people, and how many young disabled people were being housed in residential homes for older people.

Andy Greene (pictured speaking, above left), a member of DPAC’s national steering group, said Max’s ordeal was an example of the “chilling” way disabled people were being treated.

He said he believed that at least 1,000 other people in Hackney, and in every borough in the city, and across the country, were having similar housing experiences.

He told DNS that he believed the solution to the accessible housing crisis was to look at new technologies such as 3D house-printing, and to “be bold and brave and at least explore these as options when we are at such a crisis point”.

He contrasted this with merely shovelling more funding towards private sector developers and landlords – rather than tenants’ organisations and disabled people’s organisations – a solution which he said had “got us into this crisis”.

He told the protest that disabled people had developed their own solutions to crises in the social care and welfare systems, but had yet to come up with an answer to the “housing emergency”, even though hundreds of thousands of disabled people across the country “are living in homes that are not fit to be living in”.

He said: “What we need to do as disabled people, as housing activists and tenants, is to come together and create a vision of what housing in this country could look like that serves our needs.

“I say demand a better future, demand a solution to the housing crisis, but make those solutions ourselves.”

Clare, an LRU organiser, told DNS that the union had organised the protest because the council did not appear to accept the impact his housing was having on Maxime.

She said that tenants across London, and the country, were not being believed when they complained about their housing, and she called for “massive investment in housing, and housing owned by communities”.

Cllr McKenzie said in a statement later: “I met with Maxime and Mary this week at Hackney Town Hall, and listened to their experience with respect to their housing condition and assured them that I would ensure that the issues they raised would be dealt with urgently.

“We have carried out a range of repairs to the property already including the installation of a new kitchen recently in one of them, however, I acknowledge there is more that needs to be done.

“The housing team will arrange to visit the properties and make a full assessment of the outstanding work and work with Mary and Maxime to get them done to their full satisfaction, including supporting them with their future housing need.

“I want to say I am wholeheartedly sorry if we have fallen below the standards expected of us in this instance.

“Fixing the issues for these residents is a top priority for us.

“We endeavour to give all of our residents a good, secure home, and eight out of ten residents are satisfied with our repairs and maintenance services.

“We will of course see what lessons we can learn to ensure situations like this are resolved as quickly as possible in future.”

Shown the statement, Maxime said the response sounded “hollow” because of the length of time he has been asking the council for help.

And he said Cllr McKenzie appeared to be ignoring his clear request to be moved to new safe housing, which he made because he can no longer cope with the “trauma and struggle attached to this property”.

*He has asked for his surname not to be used