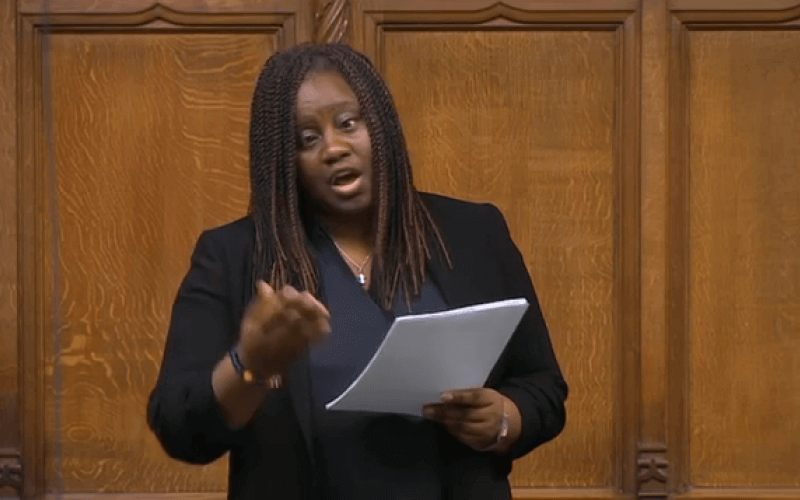 A disabled MP has accused the government of “playing with people’s lives” and warned that its new public order bill will criminalise disabled people and other minority groups.

Marsha de Cordova, a former shadow minister for disabled people, told fellow MPs that the bill would “criminalise protest tactics” and drag disabled people and others into the criminal justice system.

The Labour MP for Battersea praised the disabled activists who locked their wheelchairs to traffic lights in protest at the 2010 coalition government’s welfare reforms, a tactic that is set to be criminalised under the bill.

She was speaking during the second reading of the bill, which includes a new criminal offence that would see protesters potentially imprisoned for attaching themselves to an object, person or land, just as disabled activists did during a major action at Oxford Circus in London’s West End in January 2012.

That action by Disabled People Against Cuts (DPAC), the Disabled People’s Direct Action Network (DAN) and UK Uncut saw about 20 wheelchair-users lock themselves to a chain across Regent Street, in protest at the government’s welfare reform bill.

De Cordova (pictured) said the public order bill was unlikely to comply with the UK’s international human rights obligations, and that campaigners had warned it would “give the police carte blanche to target protestors”.

She told the House of Commons this week: “My freedoms today are directly linked to the organising and protests that happened on our streets, from the suffragettes who chained themselves to parliament to secure votes for women, to disabled people who locked their wheelchairs to traffic lights to fight the discriminatory cuts to social security, and the Black Lives Matter protests.”

She said that protesting was “one of the most effective ways for people from under-served and under-represented groups to organise and deliver change for our communities.

“Clamping down on protest will not only have an impact on the types of issues that our communities will be able to voice their concerns about but shut down key avenues of mobilising the public to support and preserve our rights.”

She urged ministers to watch Then Barbara Met Alan, the BBC drama which aired for the first time in March, and which highlighted how members of DAN fought for disability rights through direct action.

De Cordova said these powers were “a form of structural oppression that will continue to hurt and harm our black, Asian and ethnic minority communities.

“Their expansion will only entrench racial disproportionality in the criminal justice system and further erode trust in public institutions.”

She said the bill will “not solve the problems that it seeks to address.

“All it will do is increase the criminalisation of people from our under-represented and under-served communities.”

She added: “The government are not interested in protecting people or serving those who need them most; they want only to protect themselves, to hold on to power by playing with people’s lives, and to manipulate the public to deflect from their failures.”

She told Disability News Service later: “Protests have been a great vehicle for us to come together and advocate for our civil and human rights.”

She said direction action in the 1990s had helped to pave the way for the passing of the “important but woefully inadequate Disability Discrimination Act”.

De Cordova said: “That’s why the struggle still goes on for our civil and human rights.”

She said that protests were about more than seeking legislative change and that “direct public action helped our movement to change the narrative of how we are represented”.

She said: “People from our community chaining themselves, blocking streets and protesting loudly helped push back against the then popular narrative that we are passive and in need of help.

“They showed we have agency and that we can determine our own future.”

The bill, which will affect England and Wales, also introduces a new criminal offence of interfering with “key national infrastructure”, and it will give the courts the power to impose serious disruption prevention orders on people with protest-related convictions or a history of causing serious disruption at protests.

Home secretary Priti Patel, introducing the bill, said it was designed to address the rise in “criminal, disruptive and self-defeating tactics from a supremely selfish minority”.

She particularly focused on protests around the HS2 high-speed railway line, and those by supporters of Extinction Rebellion and Just Stop Oil.

She said direct action protests had seen “parts of the country grind to a halt”, while “transport networks have been stopped, printing presses blocked and fuel supplies disrupted”.

Patel said the new offence of “locking on and going equipped to lock on” would criminalise the “protest tactic of people intentionally causing pandemonium by locking themselves on to busy roads, a building or scaffolding”.

Earlier this month, disabled activists pledged that the government’s plans would not stop them taking to the streets to fight oppression.

Grassroots groups like by DPAC have used direct action as a key tool in bringing the public’s attention to government policy they have considered unfair, discriminatory, or even lethal, over the last decade.

DAN and the Campaign for Accessible Transport began using such tactics in the late 1980s and early 1990s.