You are here: Home / Activism and Campaigning / Queen’s speech: Activists’ message to Patel over new protest bill: ‘We fight on’ 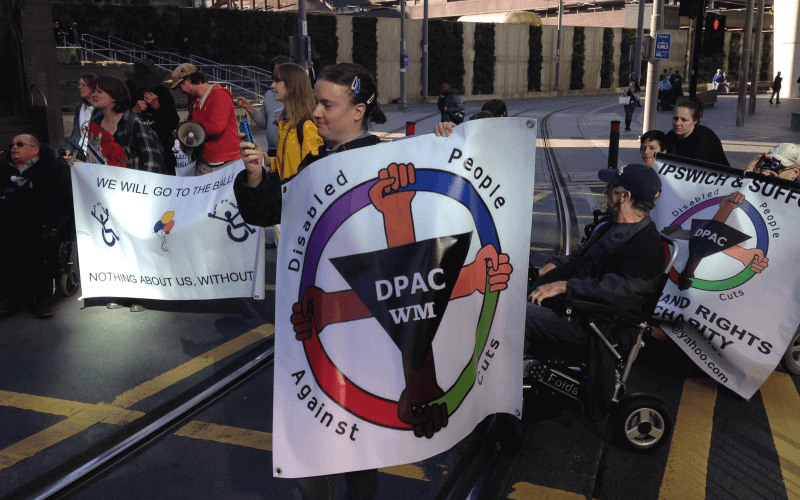 Disabled activists have pledged that new government plans to criminalise many of those who take part in direct action protests will not stop them taking to the streets to fight oppression.

Disabled People Against Cuts (DPAC), which has embarrassed successive governments with repeated direct action protests over the last decade, promised that it would be “business as usual”, despite threats issued by home secretary Priti Patel.

And it said it would both challenge the new proposals and continue to fight on “our issues”, adding: “It will not stop us, 100 per cent.”

The new public order bill, affecting England and Wales, had its first reading yesterday (Wednesday), on the second day of the new session of parliament.

It was one of 38 new pieces of legislation included in this week’s Queen’s speech, which describes the UK government’s parliamentary plans for the next 12 months.

The public order bill introduces a new criminal offence of interfering with “key national infrastructure”, with a penalty of up to 12 months in prison*, and up to six months in prison for a new offence of locking-on (a protester attaching themselves to a person, object or land)*.

And it will give the courts the power to impose serious disruption prevention orders (SDPOs) on people with protest-related convictions or a history of causing serious disruption at protests, with a breach of an order leading to a prison sentence of up to six months*.

Andy Greene, a member of DPAC’s national steering group, said the bill was “a full-frontal attack on disabled people and the poorest communities and the most marginalised in the country” and “a deliberate tactic to silence not just activists but communities”.

He said: “The Tories, this is what they do, they are nothing if not consistent.

“There is a whole armoury of things we can do to push back, and we will be utilising everything that we possibly can.”

He said this was the government’s “21st century version” of inclusion.

He added: “We are seeing preparation for a head-on collision with communities who are being oppressed and have something to say about that, and the state and the institutions that are doing that oppressing.”

Greene insisted that there had always been the threat of criminal action being taken against protesters, but the government had now “tightened the screw”.

And he said that disabled people had only been able to make significant progress against the oppression they faced when they were able to present a “counter narrative” and “be disruptive”, as grassroots groups like DPAC and the Disabled People’s Direct Action Network (DAN) have done.

He said DPAC would “continue to fight on our ground and our issues” but also oppose the new bill “in its entirety in every way that we can”.

Grassroots groups like DPAC have used direct action as a key tool in bringing the public’s attention to government policy they have considered unfair, discriminatory, or even lethal, over the last decade.

Among their protests was a major action at Oxford Circus in London’s West End in January 2012, which saw about 20 wheelchair-users lock themselves to a chain across Regent Street and completely block one of the major routes into London’s shopping heartland for more than two hours, in protest at the government’s welfare reform bill.

DAN and the Campaign for Accessible Transport had begun using such tactics in the late 1980s and early 1990s.

But some of these tactics – such as locking or gluing themselves onto street furniture and obstructing “key infrastructure” such as public transport – are now set to be criminalised through the new public order bill.

Disabled artist-activist Dolly Sen has previously said that she was “expecting to go to jail” for her fight against injustice, due to changes being introduced by the government through its Police, Crime, Sentencing and Courts Act, which became law last month and which she believes will have a worrying impact on the right to protest.

Yesterday she told DNS that the government’s latest attack on human rights and democracy had not changed her mind.

She said the UK was “not a great place for many groups of people”, including disabled and poor people.

She said: “In fact, people are suffering directly from government policy, including people dying. I use my creativity to highlight this and try to change things.

“Just because this government wants to attack human rights and democracy in this way, it won’t mean I will stop. It is unethical and something Putin would be proud of.

“I will still act like a free person even if this governments stops that being the case. Jail doesn’t scare me, this country sliding into fascism does.”

Some measures already passed through the Police, Crime, Sentencing and Courts Act come into force today (Thursday), including a new criminal offence of wilfully obstructing a highway, with a prison sentence of up to six months*.

Home secretary Priti Patel said in a statement accompanying the publication of the public order bill: “What we have seen in recent years is a rise in criminal, disruptive and self-defeating guerrilla tactics, carried out by a selfish few in the name of protest.

“Not only do these anti-social protests cause untold delays and misery for the law-abiding public wanting to get on with their lives, it tears police away from communities where they are needed most to prevent serious violence and neighbourhood crime.

“This bill backs the police to take proactive action and prevent such disruption happening in the first place.

“These measures stand up for the responsible majority and it is time that parliament got behind them.”

But Dennis Queen, who has taken part in DPAC and DAN direct action, but was speaking personally, said she was “utterly disgusted” with the government’s proposals, which feel “deeply personal to those of us who have quite literally put our lives on the line to fight for emancipation”.

She said: “All of the social improvements disabled people now enjoy, and have enjoyed, were achieved by a combination of campaigning tactics.

“These include all kinds of gentle, polite campaigning as individuals and organisations, as well as a (far smaller) amount of legal protests and some non-violent civil disobedience protests via networks that include Campaign for Accessible Transport and Disabled People’s Direct Action Network – and now Disabled People Against Cuts.

“I truly believe it takes all of these kinds of campaigning to create the social change we have seen.”

She said: “There is a reason we have a right to protest – this is supposed to be a democratic society where we can show our disagreement.

“If we lose what’s left of it, what hope do our rights have?”

*Sentences for these offences will also include possible fines, which in some cases are potentially unlimited