You are here: Home / Independent Living / Queen’s speech social care pledge ‘is waffle and a smokescreen’ 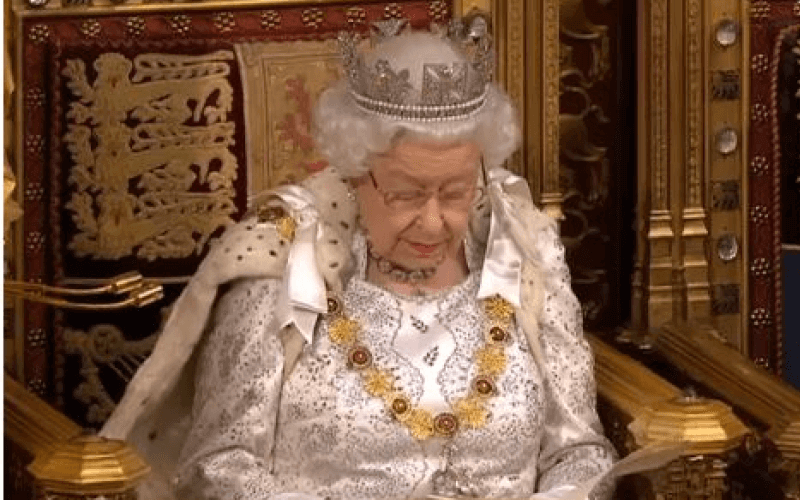 The government’s promise in this week’s Queen’s speech to introduce proposals to solve the adult social care crisis has been dismissed by leading disabled campaigners as “waffle”, a “smokescreen” and “the same old platitudes”.

A speech laying out Boris Johnson’s first programme of priorities for his government, delivered by the Queen (pictured), included a pledge to “bring forward proposals to reform adult social care in England to ensure dignity in old age.”

In a briefing accompanying the speech, the government said it would “bring forward substantive proposals to fix the crisis in social care to give everyone the dignity and security they deserve”, which would include “setting out legislative requirements”.

But in his introduction to the briefing document, Johnson ignored social care completely.

The announcement came as the Care Quality Commission, in its annual assessment of the state of health and social care in England, warned that the “failure to find a consensus” on a future adult social care funding model “continues to drive instability in this sector” and said there was “an urgent need for Parliament and government to make this a priority”.

Mark Harrison, of the Reclaiming Our Futures Alliance, who helped draw up plans for a new National Independent Living Support Service (NILSS), an idea overwhelmingly approved by Labour members, although not yet by party leaders (see separate story), said: “The Tories have no intention of solving the social care crisis.

“They are not serious. If they were, they would have a bill and a legislative timetable.

“The smokescreen in the Queen’s speech is designed to confuse and give the appearance of action when the reality is the opposite.

“The relatively small sums of money being promised don’t go any way to meeting the need or addressing the funding cuts since 2010.”

Professor Peter Beresford, co-chair of Shaping Our Lives, who has written in support of ROFA’s “radical and transformational” NILSS plans, said: “As for the present minority government’s waffle about social care, perhaps the least said the best.

“We are used to modern UK governments making announcements of new money that really isn’t there.

“But to announce inadequate social care proposals they aren’t even in a position to implement, takes us to a new low.”

Baroness [Jane] Campbell, a crossbench peer and chair of the Independent Living Strategy Group, said she was working on her own proposals, which would be laid out in a private members’ bill.

She said: “Although the announcement on social care was at least mentioned in the Queen’s speech yesterday, there is nothing to suggest that it is going to be anything more than the same old platitudes that we have been fobbed off with for years.

“I am so weary of fine words that never materialise into action; it will take strong, progressive action to make me believe that anything is going to change.

“That’s why I am attempting to develop my own private members’ bill, on the right to independent living.”

Brian Hilton, digital campaigns officer for Greater Manchester Coalition of Disabled People, said it was unclear from the Queen’s speech whether long-delayed plans for a social care green paper had now been scrapped.

He criticised the failure to mention disabled people in the part of the speech relating to social care.

He said: “Did the government think that disabled people would simply disappear following the scrapping of the Independent Living Fund in 2015?

“The government legislative agenda in relation to social care makes no direct reference to disabled people, which is totally unacceptable.”

Like others, he was critical of Labour’s own announcement on social care this week, which pledged to provide free personal care for older people and only to “work towards” extending that to working-age adults.

He said: “GMCDP believes we need a clear timescale and commitment from both the government and the opposition parties to consult on their social care plans.

“That means actively engaging with and listening to disabled people and our organisations.

“To be clear, what we need, what we demand, is that all political parties accept the need for legislation that enshrines disabled people’s universal right to independent living.

“Furthermore, just as health care is free at the point of delivery, so should social care.”

Svetlana Kotova, director of campaigns and justice for Inclusion London, said: “This Queen’s speech is a bad news for disabled people who have been hardest hit by austerity.

“There is nothing in it to make our lives better.

“Proposals for social care and mental health are not the radical change that we need, but are just patching up an already broken system which breaches our human rights and does not comply with the UN Convention on the Rights of Persons with Disabilities.

“The government has been promising to reform social care for years and it looks like their main concern is cost, not the radical rethinking of the system and setting up a service that would promote our right to independent living.”

She said this reflected the lack of meaningful engagement with disabled people and their organisations.

Sue Bott, head of policy and research at Disability Rights UK, said: “Once again, a commitment to reform social care but only so far as ‘bringing forward proposals’, which we have heard many times before. Will this time be any different?”

Fran Springfield, co-chair of Disability Labour, said the funding offered by the government for adult social care was “totally inadequate and fails to address people’s real needs”, describing it as like “an Elastoplast being applied to a fracture”.

Elsewhere in the Queen’s speech, the government promised to continue work to reform the Mental Health Act – following last December’s publication of an independent review of the act – with a white paper promised by the end of the year.

Bott said that people experiencing mental ill health “must be at the centre of any reform”.

And Deborah King, co-founder of Disability Politics UK, said: “The mental health section of the Queen’s speech briefing says there will be a white paper by the end of the year.

“Despite all the political rhetoric, this shows how slowly mental health is moving as an issue under this government. They have been in office since 2010.”

There will also be a controversial new bill that would tackle electoral fraud – which would require voters to show photographic identification, which Labour leader Jeremy Corbyn has described as “clearly discriminatory” – but would also make it easier for disabled people to vote at polling stations.

This would allow a wider range of people to assist disabled voters and would require returning officers to provide equipment to support voters with sight loss and other impairments who face barriers in voting.

King said: “It is good that there is going to be more support for disabled voters. But the proposals say nothing about the accessibility of polling stations.

“We’ve seen how personal independence payment assessments are held in inaccessible buildings and polling stations continue to be held in premises without proper access.”