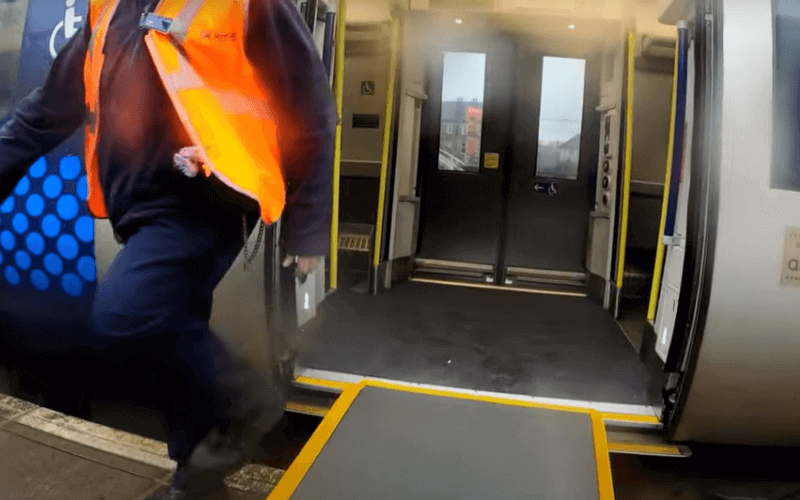 Rail operators across the country are being investigated by their regulator after a series of concerns about potentially fatal safety flaws in the use of the ramps used to allow wheelchair-users to board trains.

Disability News Service (DNS) has this week been contacted by three disabled campaigners who have each raised concerns with different rail operators about the “persistent illegal and dangerous” use of manual boarding ramps.

They have each pointed out that ramps are repeatedly – and unlawfully – being used by rail staff who fail to ensure they are safely secured to the doorframe of the train using “lugs” or “pins”.

Some of the ramps have also been damaged so badly that they can no longer be safely attached to trains.

The safety flaws are putting disabled passengers across the country at risk of falling in their wheelchairs from ramps onto the platform, or even onto the tracks between the carriage and platform, potentially causing fatal injuries, including to wheelchair-users dependent on an oxygen supply.

DNS has been shown an email sent to another disabled rail-user by the Office of Rail and Road (ORR) – which regulates health and safety for Britain’s rail network – in which it says that unsafe ramps have been reported by people “using a number of railway companies”.

ORR goes on to say that accidents caused by such unsafe ramps “are reasonably foreseeable and have the potential to cause fatal injury”.

One of the three rail-users, Doug Paulley, has sent a letter to ScotRail that highlights its apparent repeated breaches of the Equality Act, as it failed to act for nearly two years after he first started raising concerns.

On Monday, just a day after Paulley emailed a letter threatening legal action to ScotRail, ORR told him the company had agreed to replace 400 ramps at stations across its network in Scotland, as well as taking other safety measures.

Some of the ScotRail ramps no longer have the pins needed to secure them safely to the train because of being stored incorrectly.

ORR has told Paulley that it believes ScotRail’s arrangements “do not ensure that staff are competent in ensuring that the ramp is secured to the vehicle when in use, and this would explain why your repeated experiences have fallen short of legal compliance”.

Paulley said ScotRail has “put wheelchair users’ lives at risk by the provision of illegal ramps, over multiple years and despite having this brought to their attention”.

Meanwhile, in London, another wheelchair-user, Jeff Harvey, has told ORR how staff at Walthamstow overground station have twice in the last month failed to secure a ramp as he was leaving a train.

Last week, Harvey told Transport for London (TfL) how two members of staff had refused to correctly secure the ramp after he pointed out it was not properly attached, with one of them instead putting a foot on the ramp to try to reassure him it was safe to use in his powered wheelchair.

He told DNS: “It feels like a gamble around London whether you get a conscientious ramp wrangler or a sloppy or inexperienced person who purposely avoids using the lugs, or just can’t quite manage to get them in the holes and gives up.”

A third wheelchair-user, Chris Stapleton, told DNS he had experienced repeated “illegal and dangerous” use of ramps by staff working for rail operator Southern.

In September this year, a boarding ramp was used incorrectly on more than a quarter of his journeys by Southern staff who had failed to attach it using the lugs or pins.

On each occasion, when he challenged the staff member, “the person argued with me and either refused to deploy the ramp correctly, insisted it was fine to deploy it incorrectly, or lied and stated that they had deployed it correctly when they hadn’t”.

Stapleton told DNS: “Deploying the ramp without engaging the tabs means that the ramp is resting loosely on the doorplate and could easily slide off and crash onto the platform during use – I know personally one wheelchair-user to whom this has actually happened.

“Luckily she was not injured, but it could have turned out much worse for her.”

He has had a face-to-face meeting with two senior Southern managers about the issue, and is awaiting a report from an ORR investigator into the company’s failings.

An ORR spokesperson said: “We are currently investigating a number of complaints regarding wheelchair ramp failings and the immediate response from the train operators has been positive.

“Ramps must be secured by law for boarding and alighting, and although we have had no reports of any injuries, an unsecured ramp raises the risk.

“As such, our engagement with the train operators on these issues continues.”

A ScotRail spokesperson said: “ScotRail is committed to making the railway open and accessible to all.

“This includes implementing any recommendations and requirements specified by ORR to enhance safety on Scotland’s railway.

“We are in the process of securing new ramps for stations across Scotland, and anticipate that we will commence installing these new boarding aids early next year.”

Rory O’Neill, TfL’s general manager for London Overground, said: “We’re sorry for Mr Harvey’s experiences and would like to reassure him that running a safe and accessible network is our utmost priority.

“Our operator, Arriva Rail London, has robust procedures in place to ensure all people with reduced mobility can travel safely on our network, but I’m sorry for any occasion when these high standards are not met.

“These are extremely rare and any report is fully investigated and measures will always be taken to ensure it does not happen again.

“Arriva Rail London is supporting the Office of Rail and Road, [which] is looking at accessibility across the UK’s rail network, and will do everything possible to improve the accessibility of our network.”

“We need to understand why some of our people are getting this wrong – it’s so important we get this right every time.

“When we heard about Chris’ experience, we met with him and explained all that we’re doing to put this right.

“We’d already retrained all our frontline staff, so we’ve now set up an improved system to validate that training with theoretical and practical checks every three months.

“We’re using the information he’s given us to inform those checks with follow-up conversations with those who get something wrong.

“We’re also turning some of our colleagues who excel at providing assistance into coaches to spread the good practice, and reminder stickers about lugs are to be added to the ramps.

“On top of this, we now include assisted travel in our annual competency assessments of our platform dispatchers, watching them deploy a ramp and check on their other knowledge of assisted travel.

“This is an improved process. We’re not saying it’s perfect but we are making big strides. We’re taking this really seriously.”