A leading researcher and writer has called on disabled people and their organisations to build alliances with other groups hit by the “dysfunctional, unhealthy” economy.

Jenny Morris, who helped write the Labour government’s Improving the Life Chances of Disabled People white paper, also said that disabled people should expose the “huge gap” between politicians’ rhetoric and the reality of people’s lives.

She said the “real world” showed a contrast with “political rhetoric”, and pointed to the repeated attempts by politicians to cut the number of people on out-of-work sickness and disability benefits.

Although both the coalition and Labour governments had failed to reduce significantly the number of people claiming incapacity benefits, they had ruined “many people’s lives in the process”, and had failed to focus on the behaviour of employers and the wider economy.

Morris (pictured, at the conference) said the “magnificent fight” to save the Independent Living Fund had “brought into the spotlight” the question that needed to be continually asked of the government: whether ministers were saying that society cannot afford to allow disabled and older people to have the same opportunities as non-disabled people.

She was speaking at a conference in Sheffield organised by the Reclaiming Our Futures Alliance, to discuss the need for a new umbrella organisation of disabled people’s organisations in England to represent disabled people and fight for their rights.

Morris said there was a “growing and energetic grassroots movement of disabled people, which had been aided by social media, which made involvement possible for those who were unable to take part in more formal campaigning”.

But she said: “Our priority needs to be to make alliances with those more generally affected by this dysfunctional, unhealthy economy.

“We need to make alliances with older people and also with family carers.”

Morris said it was also worth looking at local authorities as possible allies, as they were “potentially on a collision course with central government”.

She said: “Disabled people have won important fights before by making important alliances with local government, and there is that potential for doing this again.”

And she said there was scope for both criticising other organisations – such as central and local government, and charities – and working with them on some issues.

She said: “I think there is scope for pissing inside the tent as well as outside the tent. I believe that successful movements do both.

“It is very frustrating trying to work with organisations and individuals who do not necessarily share our world view, but it has to be done.”

Morris suggested that George Osborne’s budget cut to support for new claimants of out-of-work disability benefits [in the work-related activity group (WRAG) of employment and support allowance] “opens up a real campaigning opportunity”, because the change will not be introduced until April 2017.

She said: “It gives us time to expose the huge gap between rhetoric and reality. People in WRAG are disabled, ill and assessed as not capable of work.”

But she also said that disabled people “must not get drawn into using language that is diametrically opposed to disability rights and independent living”, such as the term “vulnerable”.

She said: “It is the kind of language that undermines us… Our resistance has got to be based on arguments about social justice, equality, and disabled people aspiring to the same civil rights as everybody else.

“It should not be based on separating out people with the most significant impairments… making them a special case.”

There were some concerns raised at the conference about Morris’s call for the disability movement to develop wider alliances.

Ruth Bashall, director of the Stay Safe East project, which supports Deaf and disabled survivors of domestic violence and hate crime in east London, told delegates: “We have to be clear about who we work with and when.

“Maybe we work with people on one campaign and not another.”

She pointed out that carers were often perpetrators of abuse and violence against disabled people.

Steve Graby, of Greater Manchester Coalition of Disabled People, said that allying with organisations that were much closer to the government risked “disempowering” disabled people’s organisations.

He said: “Carers, older people’s organisations, even charities. I am just wondering where do we want to draw the line?”

He later tweeted: “Need 2b clear about boundaries of who2 work with – eg carers orgs when many carers perpetrate violence against disabled ppl.”

When asked where the line should be drawn with allies, Morris told the conference: “I don’t think it is up to me to draw the line.

“Those of us previously pissing inside the tent needed those of you pissing outside to keep reminding us where we came from, what our principles are and what we should be holding true to.”

Shaun Webster, from the self-advocacy organisation Change, said: “Like other organisations, we do know we have to work together to get things done. We have got to make alliances. If we don’t work together, the government will win.”

Anne Rae, chair of Greater Manchester Coalition of Disabled People, warned that some “ambitious” disabled people had convinced themselves that “they and only they can get politicians to listen to them”, but had then been forced to “ameliorate” their views because they knew the government “will not listen to radical views”.

During the conference, delegates discussed possible alliances with personal assistants, trade unions, the human rights movement, and other marginalised groups such as lesbian, gay, bisexual and transgender groups and black and minority ethnic organisations, as well as the women’s movement. 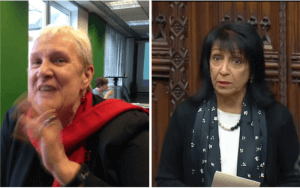 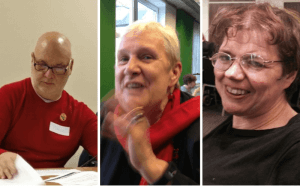 New concerns over equality watchdog as it scraps disability committee