You are here: Home / Activism and Campaigning / Seán McGovern: Tributes paid to ‘principled and tenacious fighter for rights’ 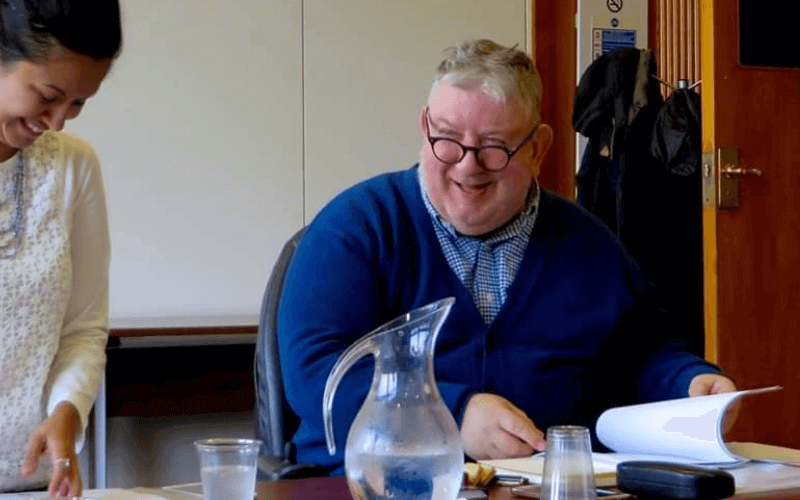 Disabled and union activists have joined family, friends and politicians in paying tribute to Seán McGovern – a principled, tenacious and influential fighter for disability rights – who died last week.

He died suddenly, only a day after the death of his mother, Delia.

His three surviving sisters, Collette, Christine and Maureen – his other sister, Angela, died last year – said the “devastating” news “felt as though the ground had been pulled from beneath us”.

Many fellow activists paid tribute this week to McGovern’s commitment to the disabled people’s, union and Labour movements over three decades.

Before their closure, he was branch secretary of London’s five Remploy factories for Unite, and was disability officer for Labour in London.

Marsha de Cordova, Labour’s shadow women and equalities secretary, said McGovern had been “a friend and a comrade” and they had shared many platforms and marched and spoke at many rallies together.

They met first at a Labour party meeting about 10 years ago in Vauxhall, where they were both living at the time.

They had worked for different organisations at the “amazing” 336, an accessible disability hub in Brixton where many disabled people’s organisations are based, and, she said, “Seán was at the heart of that”.

“He was a campaigner for disability rights and an advocate for disabled workers’ rights as well.”

“He was quite a dapper guy. He knew how to dress, from the shoes, all the way to the hat, he was such a cool guy.

“He was a great supporter and encourager. He was just such a flipping brilliant man. I am going to miss him hugely.”

On his blog, McGovern described himself as “someone who views life though a glass half empty”, but Claire Glasman, a fellow disabled activist who dated him for about three years after they met at a meeting in the late 1990s, remembers him as “cheerful and upbeat, with a twinkle in his eye”.

She also remembers his fierce commitment to Remploy workers when the government ordered factory closures on the grounds that those disabled workers were employed in “sheltered” workplaces, an issue that divided the disabled people’s movement at the time.

He also spoke from the stage at the TUC’s march and rally in Hyde Park in March 2011, in front of hundreds of thousands of anti-cuts campaigners, where he attacked the coalition government’s cuts to disability benefits, care and support, and employment support, and the Remploy closures.

He told protesters: “Not content with attacking our jobs and benefits they’re bent on depriving us of life-enhancing resources. And calling it the Big Society!”

His last post on his blog, on 1 April, described how, following his intervention, Lambeth council was sending out letters to people on direct payments so their personal assistants could use them to show supermarkets they were shopping for their disabled employers during the pandemic.

McGovern had worked most recently as a direct payments officer for Disability Advice Service Lambeth, which said he would be “hugely missed” by his colleagues and those he supported, and added: “We will always miss his humour, knowledge and personal support.”

Ann Galpin, his co-chair for the last two years on the TUC disabled workers’ committee, described him as a “friend, mentor, pathfinder”, who had encouraged her from her first days on the committee in 2010 to use her lived experience to campaign for mental distress and invisible impairments to be given more prominence on the committee’s agenda.

She said they had shared a passion for “forging deeper understanding and greater formal co-production between trades unions and the Deaf and disabled people’s movement”.

She pointed to a parliamentary meeting on the need to “stop and scrap” universal credit, which they co-organised with de Cordova, the then shadow minister for disabled people, in December 2018, and the committee’s involvement in the Reclaiming Our Futures Alliance (ROFA) of disabled people’s organisations and grassroots groups.

She said the coronavirus lockdown had failed to interrupt his work.

She said: “In his final weeks working from home, he was as active as ever in promoting disability equality.

“At the virtual meeting of the TUC general council on 22 April, he put a question to [Labour leader] Keir Starmer, asking for the creation of a National Independent Living Service.”

Five days later, there was an online meeting with TUC deputy general secretary Paul Nowak and Alice Hood, its joint head of equality and strategy, which discussed how the disabled workers’ committee could act on the urgent need to campaign for disabled people to have equal rights to medical treatment and personal protective equipment during the pandemic.

Galpin said: “Picking up the many threads Seàn was working on is going to be a huge task for his friends and colleagues in both trades unions and disabled people’s organisations.

“But, as Len McCluskey, general secretary of Seàn’s trade union Unite, has said: the greatest memorial to Seàn’s life and work must be to pick up and carry forward the cause of the rights of disabled workers, which he championed to the last.”

Among his many achievements, McGovern had a significant role in persuading both the TUC and the Labour party to move from their “pause and fix” position on universal credit to one of “stop and scrap”.

He also worked closely with ROFA to persuade fellow disabled union activists, then the TUC, and finally Labour party members – at their annual conference last autumn – to back calls for a National Independent Living Service that would give disabled people new rights to free support.

He spent years campaigning for such a national service, telling a protest outside the Whitehall offices of the Department for Work and Pensions in September 2013: “We need a national care service, based on national criteria, not a service where postcodes determine the level of care you are given.

“We need a national care service that delivers care free at the point of need.”

It had been his idea to combine the end of the TUC Disabled Workers’ Conference in May 2013 with a protest in central London against government cuts, which de Cordova took part in, and led to disabled activists blocking the key Tottenham Court Road crossroads.

He said afterwards that the protest “showed that disabled trade unionists are also active.

“We are not passive, we do not just sit in committees passing motions. We are also pro-active in the movement.”

He was also a committed, active and influential member of Disabled People Against Cuts (DPAC), which described him as “a beloved friend and comrade”, and said: “His commitments to socialism, disability rights and trade unionism will be greatly missed.”

Mark Harrison, who worked with him through DPAC and the wider ROFA network, described him as a “principled and tenacious fighter for disability rights”.

He said: “Seán was a natty and stylish dresser with a great taste in music and sense of humour.

“His contribution to forwarding our rights is immeasurable.

“He was liked and respected by everyone who knew him in the disability, Labour and trade union movement and will be sorely missed.”

Michelle Daley, chief executive of The Alliance for Inclusive Education, worked with him on the independent living campaign and to push for the involvement of more young disabled people in the disabled people’s movement.

She said: “I will always remember Seán as one of the great, principled, driven campaigners.

“His powerful impact taught us the importance of harnessing solidarity, unity and valuing the movement to end oppression, injustice and inequality we experience on a daily basis.”

She was another to point to his sense of style, and said: “When it comes to outfits, Seán had swag. I always had positive comments on his style of dress and I just loved his shoes.”

Paula Peters, a disabled activist who worked closely with McGovern, including through DPAC and the Community branch of Unite, said she was “shocked and deeply saddened” by his death.

She said he had been “tireless in his efforts in the fight for equality and inclusion for disabled people.

“He really cared about the right for independent living for disabled people and support for access to work and disabled workers’ rights in the workplace.”

McGovern’s family said they had been left “in awe and overwhelmed” with the flood of messages of condolence and tributes since his death.

They said: “Our brother, uncle, and great uncle made such a significant difference for the good. His life’s work with the union and his employment was his legacy to the world.”

He was, they said, from “a proud, working-class Irish background”, and his interests included politics, music (among his favourites were Amy Winehouse and The Pogues), art and culture, and he was a long-time Chelsea supporter.

They said he was both quick-witted and short-tempered, both competitive and a “sore loser”, and had a taste for rich foods and statement shoes, hats and shirts.

His sisters added: “We could not be more proud to call Seán our brother. Seán McGovern fought for human rights, those less fortunate, those without a voice.”

McGovern’s local MP, Helen Hayes, said she was “shocked and very sad” to hear of his sudden death, and said they had spoken the week before his death, and that he had been “vigorously speaking up for disabled people suffering during lockdown”.

Among other Labour figures paying tribute was former shadow justice secretary Richard Burgon, who described him as an “inspirational socialist, trade unionist and disability rights campaigner”.

Unite’s general secretary Len McCluskey said McGovern was “a tireless champion for disabled people, and he ensured that their particular interests were never overlooked in any of our debates.

“He was always well-briefed, and everyone from government ministers down knew from experience how persistent he could be in championing the rights of disabled workers.”

Sarah Veale, TUC’s former head of equality and employment rights, said: “Seán was able to use his own experiences to inform his campaigning and his input into the committee.

“He was a caring and deeply committed man with a real knack of bringing the committee together.

“He would question TUC briefings constructively when he felt it was necessary but never just for the sake of it.

“We kept in touch on social media after I retired. His untimely death is a big loss to the campaign for the rights of disabled workers and I shall miss him.”

TUC’s general secretary, Frances O’Grady, described him as “a great trade unionist and a passionate campaigner”.

She added: “We couldn’t have hoped for a more dedicated champion for disabled people’s rights on the TUC general council – or for a more kind and decent man.”