You are here: Home / Crime / Shock and anger of abuse survivor, 20 years on from scandal 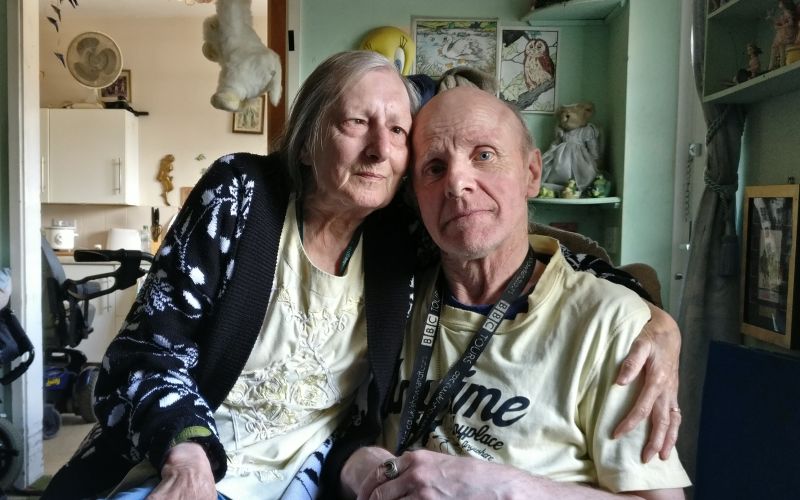 A disabled woman who survived an appalling regime of abuse at a notorious residential home has spoken of her shock and anger at seeing television reports of similar crimes at care homes in Devon two decades later.

Last week, reporting restrictions were lifted following a series of criminal trials and hearings that led to the conviction of 13 company directors and employees of Atlas Project Team, which provided residential care for people with learning difficulties and challenging behaviour.

Bristol Crown Court heard how disabled residents were locked as a punishment in bare, freezing seclusion rooms with no heating or toilet facilities.

The reporting restrictions that had been imposed on the trials were lifted almost exactly 20 years after three members of staff were sentenced, in June 1997, for their part in an abusive regime at care homes for adults with learning difficulties run by the company Longcare in Buckinghamshire*.

Dorothy Thomson (pictured, with her husband Jamie) was a resident of the Longcare homes**, and was subjected to years of terrifying physical abuse, psychological torture and other ill-treatment and neglect at the hands of Longcare boss Gordon Rowe and his sidekicks.

She only escaped after confiding in her sister, and her social worker, and her bravery in speaking out helped lead to the regime being exposed three years later, in 1994.

This week, Dorothy Thomson told Disability News Service (DNS) that the television reports of the “disgusting” and “terrible” abuse in Devon had reminded her of her own ordeal at Stoke Place, one of the Longcare homes.

She said: “Nobody on earth would ever imagine what I went through.

“Because there was occasions when I would sit on the shower room floor and bang my head against the floor and I just kept thinking to myself, ‘I just can’t take anymore,’ and I just wanted to die.”

She sees troubling similarities between what happened in Devon and the events at Longcare more than two decades ago, such as staff cruelty, residents forced to carry out menial tasks, homes located in isolated rural settings, and a punishment regime that included the withdrawal of food from residents who refused to obey staff.

She said: “It still goes on. Stoke Place, for instance, was hidden away, nobody could see what was going on. They couldn’t hear any shouts.

“It feels terrible, because it should never happen. The table should be turned onto the staff that work with them.”

She feels so disillusioned with the failure of successive governments to address institutional abuse in the 20 years since the Longcare scandal was exposed that she refuses to vote.

She said: “I will never vote in a million years, because people will not do anything.

Thomson said that it was “disgusting” and “terrible” that the authorities were still failing to prevent such abuse.

She wants to see all homes for disabled people shut down, and says she blames the government, and the police, for failing to act.

She said: “I went through a life of hell and other people shouldn’t have that life. They should be treated like everyday people, not with cruelty, because people are not animals.

“They should treat them just like ordinary people, with lives and feelings. We have the right to live normal, happy lives.”

Dr Noelle Blackman, chief executive of the charity Respond, which provided psychotherapy to some of the Longcare survivors and has also provided years of support to victims of the Atlas abuse, and their families, said the similarities between the two regimes were striking.

She pointed to the systematic nature of the abuse, which was part of the culture of the institutions, and how it was legitimised by the managers and directors.

There was also the “humiliation” experienced by female residents, some of whom were displaying signs of having been sexually abused, another characteristic of the Longcare regime.

She said: “If they were frightened and wet themselves, they would have to stay wet.

“If they stayed in the shower scrubbing themselves for a substantial time they were punished for that and sometimes would have to walk naked or almost naked from one part of the home to another because they had taken too long in the shower.”

Both Longcare and Atlas made huge profits by providing services for a group of clients that other providers did not want to support.

And she pointed to “complacent or even negligent” commissioners, among local and health authorities, that “allowed that culture to grow stronger and stronger”.

There were also low-paid and poorly-trained staff, who were “easy to groom. It’s easy to bring in staff who previously were working as cleaners or in McDonald’s and not train them at all, or train them in a regime like this.”

Blackman added: “It’s depressing. I have been working in this field since the 1990s and I feel we are seeing the same things now as we were then and I do not feel things are changing, and that things are even less likely to change now.

Blackman said she was particularly concerned about institutions that claim to be experts in managing “challenging behaviour”, as Atlas had done, and which often use “punitive” strategies to control residents who are usually “traumatised” and “coming from a place of anxiety and fear”.

She added: “After all this time, we still haven’t got the right kind of support in the community.

“Either we are paying large amounts of money for people to be supported in these kinds of institutions, or they are carted off to assessment and treatment units, which are just holding pens, they are not places to live.”

And she suggested that that situation was almost worse now than it was 20 years ago in the wake of the Longcare scandal, because the government’s austerity cuts meant there were not now the resources for the kind of innovative projects that supported people leaving the old long-stay hospitals in the 1980s and 1990s.

And she said any money there was was being siphoned off by shareholders of the companies that provided private sector assessment and treatment units, which had replaced the long-stay hospitals.

*The Longcare scandal led to a hugely-influential independent inquiry, which directly influenced several pieces of legislation including Labour’s Care Standards Act, which saw an independent national regulator taking over responsibility for registration and inspection of care homes, and new whistleblowing laws, as well as the introduction of multi-agency adult protection guidance.

**John Pring’s book on the Longcare scandal, Longcare Survivors: The Biography Of A Care Scandal, is available through the DNS website