You are here: Home / Politics / Suicide prevention minister could be ‘legally compromised’ over silence on ESA risk 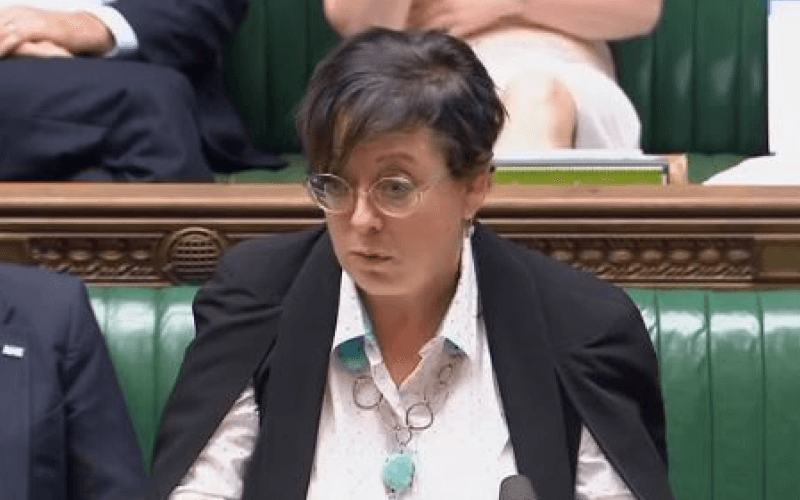 Disabled activists say the new “minister for suicide prevention” could leave herself “legally compromised” by her continuing failure to promise to warn local agencies that claimants of out-of-work disability benefits face a higher risk of taking their own lives.

Jackie Doyle-Price (pictured) refused again this week to pledge to take the simple step of highlighting that claimants of employment and support allowance (ESA) are a high-risk group, in the government’s suicide prevention strategy for England.

Disability News Service (DNS) revealed last December how NHS Digital’s Adult Psychiatric Morbidity Survey showed more than 43 per cent of ESA claimants had said (when asked in 2014) that they had attempted suicide at some point in their lives, compared with less than seven per cent of adults who were not claiming ESA.

Doyle-Price, the minister for mental health, had “minister for suicide prevention” added to her job title earlier this month, with prime minister Theresa May claiming she wanted to “prevent the tragedy of suicide taking too many lives”.

But the Mental Health Resistance Network (MHRN) this week described the appointment of a suicide prevention minister as a “cynical PR stunt”.

Denise McKenna, an MHRN co-founder, said: “The NHS Digital statistic of 43 per cent of ESA claimants having attempted suicide at some point in their lives should surely prompt the minister for suicide prevention to take immediate and decisive action to protect ESA claimants.

“Should she fail to do everything in her power to reduce risk to people on ESA, any future suicides would undoubtedly leave her legally compromised.

“Over and above her legal responsibilities, a minister for suicide prevention has a moral responsibility to speak up in support of those most at risk of suicide and to challenge the causes of suicide.

“MHRN will be demanding justice should Jackie Doyle-Smith fail in her duty of care.”

She added: “We have known for a long time that changes to the social security system are deeply implicated in people attempting and thinking of suicide and there is overwhelming evidence that there have been completed suicides due to the often-insurmountable obstacles placed in the way of disabled people accessing benefits.

“We also know that the Tories will do everything in their power to prevent the role they have played in past suicides from being open to public scrutiny, mainly by the suppression of information and by outright denial.”

Dr Jay Watts, the activist and consultant clinical psychologist who first highlighted the NHS Digital figures, said it was “crucial” that ESA claimants were seen as a high-risk group in the national suicide prevention strategy, which “influences local policy and the likelihood of targeted help to reduce suicide risk”.

She said the omission of these figures was “nothing less than a political decision putting lives at risk”.

She said: “Specific attempts to reduce risk for specific populations, such as the excellent work to reduce male suicide that has begun to reverse the epidemic of deaths, have demonstrable results at a population level.”

Watts said that if Doyle-Price ignored the evidence on ESA claimants, she would “not only neglect the responsibility of her office, but maintain the structural violence against claimants manifest in the brutality of the benefits regime so unkind that it is the final straw for so many”.

But she said that Doyle-Price could instead “insist on a kinder, fairer benefits system to make life more bearable for claimants” and “start that process today by explicitly acknowledging the elevated level of risk for ESA claimants which would have a huge roll-down effect on suicide awareness”.

He called on her to “accept that people in that cohort are at extremely high risk and propose measures to address that situation.

“To fail to do so is to be complicit in the avoidable deaths of disabled people.”

He added: “She is complicit in the ongoing epidemic of suicide affecting disabled people as a direct result of the government’s disability assessment regimes, as a result of government policy.”

A spokeswoman for Doyle-Price refused for the second week to say whether the minister would include the ESA figures in an updated suicide prevention strategy and alert local agencies that ESA claimants are a high-risk group.

Instead she referred to the existing strategy, which briefly mentions Department for Work and Pensions (DWP) guidance for dealing with claimants of ESA and other benefits who may be at risk of suicide or self-harm, its work on training staff, and the department’s processes for learning from DWP-linked suicides.

She said: “The Cross-Government Suicide Prevention Strategy recognises that people who are in receipt of benefits, including ESA, may be experiencing difficult circumstances such as financial, employment and housing insecurity, physical disability or other long-term condition which may place additional strains on their mental health and wellbeing.