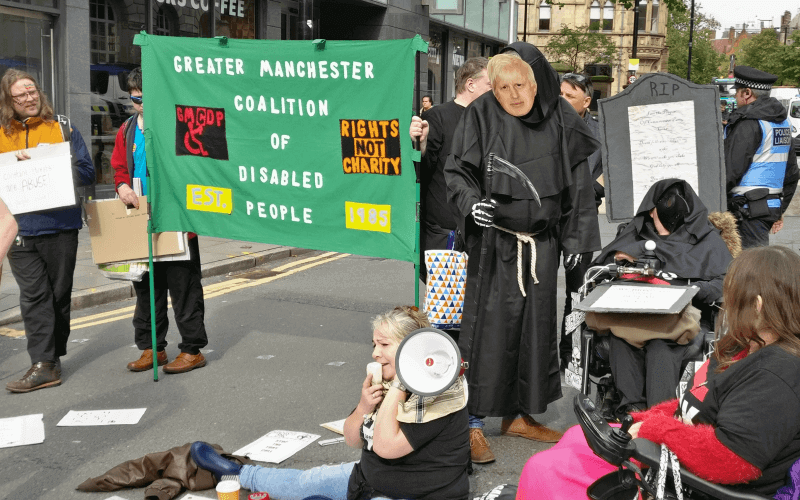 Disabled activists have protested outside the Conservative conference in Manchester in a bid to shame party members into accepting that a decade of austerity cuts from Tory-led governments have caused poverty, despair and countless deaths.

Protesters spoke of how the cuts and reforms had led to the deaths of tens of thousands of disabled people, backed up by research by mainstream institutions like Oxford, Liverpool and Cambridge Universities.

Others pointed to three high-profile and evidenced UN reports that have shown the devastating impact on disabled people of a decade of austerity.

The Disabled People Against Cuts (DPAC) protest (pictured) took place on Monday afternoon, just a few yards from the main entrance to the conference, in central Manchester.

Two activists even dressed up as “Torie Plague” and “Doris Death” to highlight the “debt, despair and death” that “heartless, soulless” Conservative-led governments have caused since 2010.

Some protesters, from Manchester, were also there to tell Tory party members that they were not welcome in their city.

And some said it was vital that those disabled people who were able to protest in person ensured that Tory party members were aware of the damage caused by their government’s policies.

Piers Wilkinson, disabled students officer for the National Union of Students, said: “It is important that those of us who can protest and are in a position of being able to protest and have our voices heard do it, particularly on behalf of people who cannot.”

Jo Taylor said of the government’s cuts and reforms to disabled people’s support: “We have to keep on protesting until they listen and understand. It is a horrendous situation.”

Rick Burgess, from Manchester DPAC and Greater Manchester Coalition of Disabled People, said the Tories had to understand that they were not welcome in the city, after 10 years of denying disabled people’s rights, and policies that had led to the loss of countless lives.

He told Disability News Service (DNS) that he was at the protest because the Tories “keep coming back and they have not got the message that Manchester is not a city built on Conservative values. It is not somewhere they are popular.”

He said there had been 10 years of the denial of disabled people’s rights “with the consequent loss of many lives”.

He said the continued return to Manchester by the Conservative party amounted to “hostile trolling” of the city.

He added: “On a human level, they need to know that they are not welcome. They should be ashamed of what they do.”

He pointed to three UN reports that had condemned the impact of government policies on disabled people, in 2016, 2017 and 2019.

He said: “This isn’t just our opinion.

“They are a disaster. There is something wrong with people who think this is OK.”

Another leading disabled campaigner, Doug Paulley, said that he had wanted to be at the protest because of the government’s “mass punishment of disabled people”.

He said: “We are an inconvenient expense at best, a complete side issue, and yet people are suffering and dying. It’s utterly disgusting. It cannot be allowed to go on.

“I am lucky that I am relatively protected from it but so many people are not.”

Eleanor Lisney, one of the founders of Greenwich DPAC, said she was at the protest because she had no idea what was going to happen to the country now, “let alone to disabled people”.

She highlighted the “intersectionality” of the impact of austerity, which had affected not just groups like disabled people and women individually, but had hit disabled women, disabled people from BAME communities and disabled immigrants even harder.

She said: “The protest here is so we keep the focus on the disastrous impact on disabled people through all those years of austerity.”

Dominic Hutchins, from Manchester DPAC, who is also a parish councillor, said he was at the protest because of the treatment of disabled people by the Tory government, including through the introduction of universal credit and its reforms and management of the disability benefit assessment processes.

He said the mainstream media failed to report how many people had died after being unfairly assessed.

Hutchins is a qualified youth worker but is currently unemployed because the youth service is “on its knees” following years of austerity.

He said: “I am on jobseeker’s allowance and disability benefits and I have got a good degree.

“The Tories don’t see the benefit of youth work but when young people are on the streets, they complain.”

Wilkinson said the protest was particularly important when Greater Manchester Police had admitted sharing information about disabled protesters with the Department for Work and Pensions (DWP).

He pointed to “hidden cuts” such as the introduction of personal independence payment (PIP), the cuts to disabled students’ allowance, the rollout of universal credit and the social care funding crisis.

And he highlighted the conclusions of the UN’s committee on the rights of persons with disabilities, which found there had been “grave and systematic violations” of disabled people’s rights by the Tory-led DWP, and research which showed austerity had been to blame for more than 130,000 deaths since 2012.

Taylor said she was at the protest because she had been forced to wash at the local swimming pool after her housing association refused to provide the disabled facilities grant she needed to adapt her bathroom, while she had also been forced to buy her own stairlift.

She said she was “disgusted” with the government’s benefit reforms and cuts to support for disabled people, and she added: “There are people dying from sanctioning and having no money.”

Another disabled campaigner and DPAC member at the protest, Nigel Peirce, a former mental health nurse, said he wanted to raise concerns about the transition from disability living allowance to PIP, and the introduction of universal credit, which had caused people to suffer “economically, physically and emotionally”, while some had died.

He said: “I haven’t got a message for the Tories because I don’t think they will listen.

“The point of being here is for other people to see us. We are in Manchester and they come by and see us. Not one Tory going in there is going to listen.”

One disabled activist told fellow protesters: “I have watched the social security system in my country turn into something I am thoroughly ashamed of.”

She said the work capability assessment “has got nothing to do with your ability to work” but was there “to frighten you and humiliate you and we are sick of it”, while she said DWP staff label her “a scrounger and a skiver”.

Another said: “We are here today to demand our basic human rights, the ability to live our lives as independently as possible, with dignity, humanity and a society that cares.

“How dare you come to the north of England. Go back to where you belong!

Gary Caine, a disabled activist from Manchester, told DNS: “There is that much tragedy going on with disabled people’s lives. People need to take a stand.

“My life has got a damn sight worse under the Conservatives, compared with Labour.

“I cannot believe my life has gone down the chute and got worse for no damn reason.”

Another disabled activist, Mero, said she had come to the protest from Birmingham, because of the “unfairness” of the government’s policies.

She said: “I just can’t stand these cuts any more.

“Why have we got to keep fighting for our rights?”