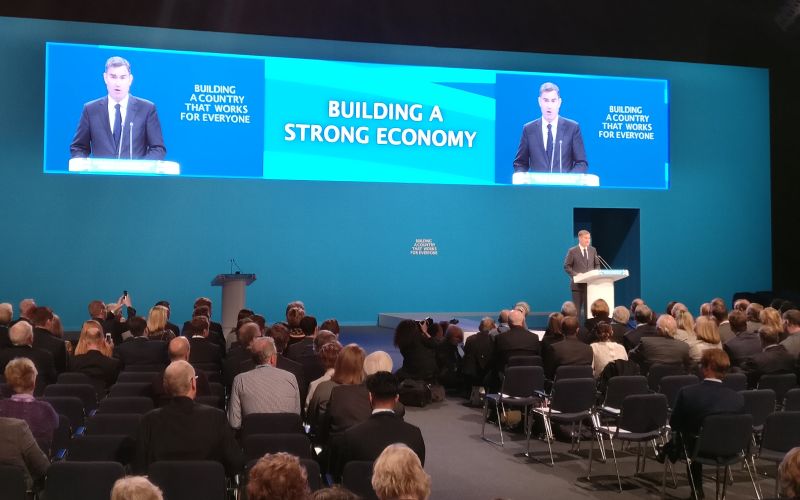 The work and pensions secretary has refused to say what he will do to help the hundreds of thousands of disabled people and other benefit claimants left in rent arrears and other debt by the botched introduction of universal credit.

Campaigners have been warning David Gauke that the rollout of universal credit is leaving hundreds of thousands in debt, and forcing people – many of them disabled – to borrow from loan sharks, pawnbrokers and payday loan companies.

This week, Gauke told the Conservative party conference in Manchester (pictured) that he would not pause the “accelerated” next stage of the rollout of universal credit, despite widespread concerns over the length of time claimants are having to wait for their first payment.

Even without delays, claimants do not receive their first payment for six weeks, but many others are having to wait two or even three months.

DWP’s own statistics show that nearly a quarter (24 per cent) of successful new claimants of universal credit – which is gradually replacing six working-age benefits – do not receive their first payment in full and on time.

Instead of pausing the next stage of the rollout – which began yesterday (Wednesday), as prime minister Theresa May was preparing to deliver her “nightmare” conference speech – Gauke said he would “refresh” guidance given to Department for Work and Pensions staff.

He said this would ensure that all claimants who need to apply for an advance payment – a loan that is usually paid back from universal credit payments over just six months – will be offered the chance of doing so when they start their claim.

He said that these advances would be paid within five working days, and on the same day for “those in immediate need”.

But he added: “Universal credit is working, so I can confirm that the rollout will continue, and to the planned timetable.

“We’re not going to rush things – it is more important to get this right than to do this quickly. And this won’t be completed until 2022.”

Stephen Lloyd, the disabled MP who shadows Gauke for the Liberal Democrats, said ministers “continue to bury their heads in the sand over the shocking impact the rollout of universal credit is having on thousands of people’s lives”.

He said: “The whole point of the piloted implementation was to learn lessons and make the necessary changes, but ministers are determined to press ahead despite the consequences.

“This is despite clear evidence from numerous respected organisations of the destitution families are experiencing because of universal credit, including statistics from the Department for Work and Pensions itself.”

Frank Field, the under-fire chair of the Commons work and pensions select committee, said Gauke’s decision to press on with the accelerated rollout of universal credit would lead to “a near inevitable Christmas crisis”.

He said that calls for a pause had been “fuelled by the unanimous and damning evidence we have collected from councils, housing associations, landlords and claimants across the UK.

“Offering advance payments up front is, of course, a welcome and overdue development.

“But short term discretionary loans can only be a sticking plaster on a policy that has many fundamental flaws, flaws that go far beyond the statutory full six-week delay in receiving the first payment.”

Gauke also spoke about universal credit at a Centre for Social Justice fringe event, and insisted that the rollout was “not a big jump into the unknown” and that by January next year only 10 per cent of relevant claimants would have been signed up to the new benefit.

He said that evidence showed that universal credit “does get more people into work” and that “if we can make sure people are aware of how the system operates, I believe it is going to be hugely transformative”.

He also claimed that universal credit would prove to be “one of the great achievements of this government”.

Questioned at the fringe meeting, he admitted that advance payments usually had to be repaid within just six months, and within nine months in “exceptional circumstances”.

But he admitted: “I think we will want to continue to look at this.”

After the fringe meeting, Gauke’s special adviser promised to respond to a DNS question on whether he was concerned about the increasing debts being faced by people who were not receiving their first payment on time, many of whom will be disabled people already living in poverty, and what action he was planning to take.

She had failed to provide a response from Gauke by midday today (Thursday).

But disabled researcher Stef Benstead, a member of the Spartacus online network, said that “refreshing the guidance” would not solve the problem.

She said that waiting at least six weeks for the first payment was far too long and that claimants “have not got the capacity to wait in arrears”.

She said: “They shouldn’t think it is a bad thing to be generous to people, to support people.”

The subject of the fringe event Gauke had spoken at had been “the future of welfare reform”, but Benstead said that rather than concentrating on benefits she had wanted to hear about “the whole of welfare reform, which includes education, housing, health, jobs and social security.

“If they want to talk about the future of welfare, they should be talking about how they are going to provide enough houses, enough jobs – decent and well-enough paid – enough healthcare and education.

“That is what I want to hear them talking about and not just, ‘This is how we are going to give, or not give, poor people money.’

“There is a lot more to welfare than giving or not giving poor people money.”