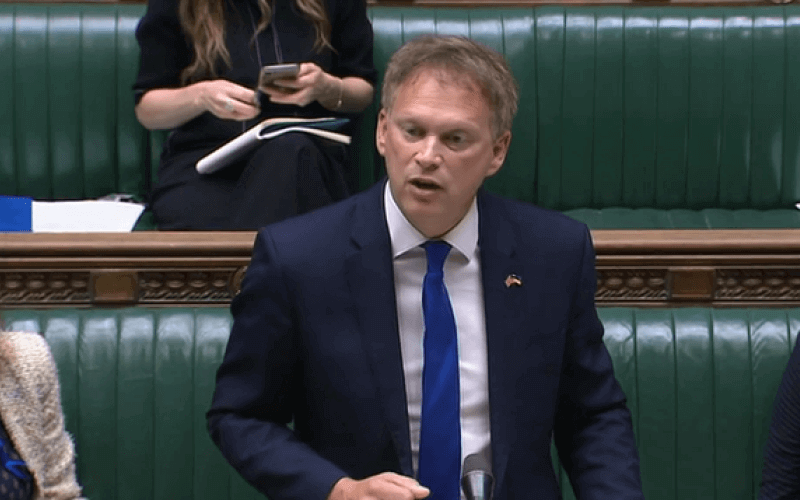 Under-fire transport secretary Grant Shapps is refusing to say if he will apologise after misleading MPs about the government’s progress in installing life-saving tactile paving on railway platforms across the country.

Shapps is already at the centre of a fierce political row after refusing to meet the RMT union to try to resolve this week’s rail strikes.

But on Monday (pictured), he told MPs – after being questioned by disabled Conservative MP Paul Maynard about assistance for disabled passengers during the strike – that the government was “speeding up” response times for assistance.

Shapps then claimed: “We will shortly complete the work that we have promised on putting in tactile pavements around station platforms to remove another potential risk of using our railways.”

But last month, Network Rail told Disability News Service that only about 60 per cent of around 5,500 station platforms across the country had been fitted with tactile strips.

The government refused last month to promise to accelerate the long-delayed installation of tactile paving, despite an inquest finding that the lack of safety markings played a part in a disabled man’s death.

The government has so far promised only to instal tactile markings on all rail platforms by 2029, even though an inquest jury found last month that the lack of tactile paving caused or contributed to the death of 53-year-old Cleveland Gervais, at Eden Park station, south-east London, in February 2020.

The jury concluded that if there had been tactile paving, Gervais would have been aware of how close he was to the edge of the platform.

The government’s new National Disability Strategy – since declared unlawful by the high court – included a pledge last year to “develop proposals for the accelerated upgrade of rail station platforms with tactile paving”.

But the Department for Transport (DfT) admitted last year that it had set a deadline of 2029 to complete the work, while Network Rail said that all its regions had plans to finish the work by March 2029.

Last month, Network Rail said it had secured the extra funding it needed.

Network Rail had failed to respond by noon today (Thursday) to requests to confirm the timetable for installing tactile markings on all rail platforms.

A DfT spokesperson refused to say by noon today (Thursday) whether Shapps would apologise for misleading MPs, and also refused to confirm the current timetable.

But he said in a statement: “We remain fully committed to fitting tactile surfaces across all mainline stations in Great Britain.

“Network Rail received an initial £10 million to install tactile paving at priority stations and funding for other stations was secured at Spending Review 2021.

“We are committed to installing tactiles at the remaining stations as soon as possible.”