A tribunal judge has hinted that he may order the Department for Work and Pensions (DWP) to release vital information from 49 secret reviews it carried out into the deaths of benefit claimants.

Judge Andrew Bartlett QC was chairing a three-person tribunal panel that was hearing an appeal brought by Disability News Service (DNS) against DWP and the information commissioner.

DNS has been trying since August 2014 to obtain information contained in the 49 so-called “peer reviews”, to find out what actions ministers have taken following deaths linked to the withdrawal or non-payment of benefits such as employment and support allowance (ESA), and to the discredited work capability assessment.

DWP first insisted that it held no information about such deaths, but later admitted that it carried out internal reviews into some deaths and serious and complex benefit-related cases, and that it had conducted 49 reviews of deaths between February 2012 and the autumn of 2014.

Judge Bartlett told the barristers representing DWP and DNS at last week’s hearing: “Suppose we were to decide… that there are some bits of reviews… which should be released.

“What would the practicalities be of applying that? You might want to think about that.”

He said: “Those are the areas we are going to have to be thinking carefully about.”

Judge Bartlett appeared to suggest that any information the panel ordered DWP to release would probably be restricted to the general conclusions and recommendations of the 49 reviews, as other information would relate too closely to the people who had died.

DWP’s barrister, Tim Buley, told the hearing that the seven reviews the panel had been shown included “some prominent cases” of benefit-related deaths.

DWP is relying on section 123 of the Social Security Administration Act 1992 to avoid releasing information from the reviews.

The act states that a civil servant is guilty of a criminal offence by disclosing “without lawful authority any information which he acquired in the course of his employment and which relates to a particular person”.

DWP argues that this covers all the information within the peer reviews, whereas barrister Elizabeth Kelsey, of Monckton Chambers, who is representing DNS on a pro bono basis, said that it covers only a small proportion of that information.

Both barristers directed much of their attention during the appeal to discussing the meaning of the phrase “relates to”, and how that should be interpreted to cover the content of the reviews.

There was also discussion of whether such information was too “sensitive” to be released.

DWP’s barrister, Tim Buley, told the hearing: “The appellant seeks these reviews because he thinks they are in the public interest, but the secretary of state [Iain Duncan Smith] does make the point… that this is sensitive information about individuals and there are good reasons for saying that that information ought not to be disclosed. It might cause distress if it were.”

But Kelsey made the point that DWP appeared to have refused to even inform the families of those who died that peer reviews had been carried out into their deaths.

She said: “Perhaps the strongest point is that in many of these cases, the families do not know if the reviews have been conducted and desperately want to know.”

Kelsey also urged the panel to examine all 49 of the peer reviews, rather than the seven reports selected by DWP.

The death of Michael O’Sullivan was mentioned several times in the hearing, as Kelsey suggested that information relating to his case had already been published by DWP, through its response to a prevention of future deaths (PFD) report written by a coroner, which was first revealed by DNS last year.

But Buley told the hearing that DWP had not carried out a peer review into the death of the north London father-of-two, despite the coroner writing in her PFD report that the work capability assessment process had “triggered his suicide”.

Buley’s admission suggests that DWP breached its own guidance on peer reviews in O’Sullivan’s case, as the guidance states that “where suicide is associated with DWP activity, a Peer Review must be undertaken… irrespective of whether a complaint has been made or suicide is formally confirmed.”

Buley also appeared to accept – after taking advice from a government lawyer – that there may have been “a small number of inquests” in which coroners have linked the WCA with a suicide. He said he would ask DWP to provide further information on this point.

In another apparent admission, Buley told the hearing that peer reviews “take their place as part of an overall process of complaints handling”, even though DWP appears not to have advised any families – the likely source of such complaints – that the reviews had taken place.

After the hearing, John Pring, editor of DNS, said: “The reason this appeal was necessary was because we need to know why these 49 people died.

“We need to know if their deaths were linked to flaws in DWP policies or procedures, and if they were, what measures ministers took, or failed to take, to correct those flaws and prevent further deaths.

“The families of those who died deserve to know the truth, as do the millions of sick and disabled people who will go through the benefits system in the next few years.

“They need that system to be safe, and they also need to know that ministers have done and are doing everything they possibly can to avoid causing them unnecessary harm.”

A DWP spokesman said after the hearing that the department could not comment on its failure to carry out a peer review into the death of Michael O’Sullivan because “we can’t go into details of an individual case”.

He said: “Suicide is a tragic and complex issue and we take these matters extremely seriously.

“We are constantly reviewing our processes and procedures and have made significant improvements to the WCA, such as introducing mental health champions, and ensuring that claimants who are likely to be found fit for work receive a telephone call to explain the decision and check whether all the evidence has been considered.” 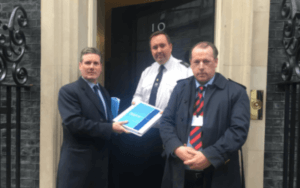