You are here: Home / Activism and Campaigning / Tributes to ‘generous-natured, passionate and courageous’ activist 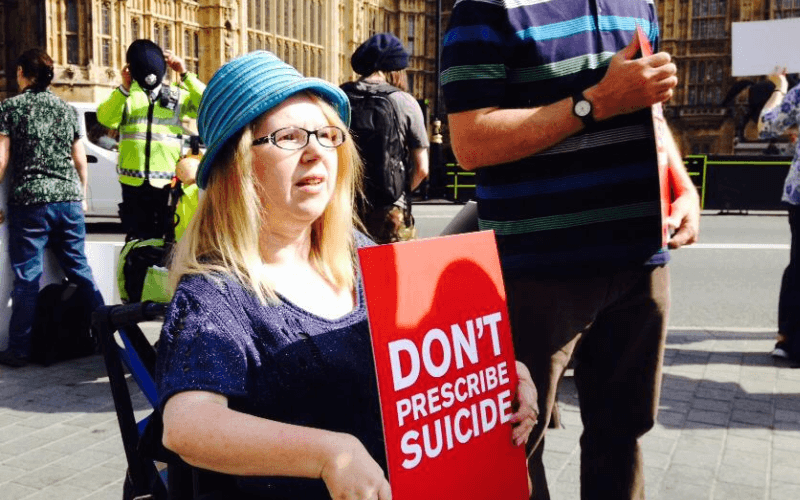 Fellow activists and friends have paid tribute to Juliet Marlow, the “campaigning linchpin” of the organisation that leads disabled people’s opposition to the legalisation of assisted suicide in the UK.

Members of Not Dead Yet UK (NDY UK) were among those paying tribute to Marlow, after her death on 11 August following a short illness, describing her as NDY UK’s “communication guru” and “one of the most generous people we have ever known”.

Baroness [Jane] Campbell, co-founder of NDY UK, said she and fellow activists were “absolutely devastated” at their loss.

She said: “Not only did she contribute an invaluable service to our under-resourced fight to protect the lives of disabled people (coordinating, writing and speaking for us), but most importantly she was our steady rock and friend.”

She described her as “the most generous-natured person I have ever come across”.

In a statement on its website, NDY UK added: “Juliet was totally committed to this work and ensured that everyone knew exactly what we were doing, why we were doing it and she helped everybody take our message forward.

“She devoted a great amount of time and energy to our cause.

“But there was also so much more to Juliet’s talents. She researched for us, she wrote for us and she spoke for us, often to very hostile audiences.

“She was courageous, kind and above all, one of the most generous people we have ever known.”

In one campaign video recorded for NDY UK in 2015, in opposition to the latest attempt to force a bill to legalise assisted suicide through parliament, Marlow (pictured) said: “The idea that the pro assisted suicide lobby have that if you need help to do things to help you wash, dress, bath, toilet that you’re not dignified is complete rubbish and it makes me quite angry.

“I have been employing my own personal care assistants for the last 20 years and because of them, because I have the right support and I have the right amount of painkilling medication I have a fantastic life.”

“Do we really want to live in a society that expects its citizens to end their own life when they’ve outlived their own usefulness?”

In one of her last public appearances, in February, she spoke for NDY UK at a controversial conference hosted by the Royal Society for Medicine on “choice at the end of life”.

She had only been added to the list of speakers after NDY UK raised concerns at not being invited to speak at the event.

She told the conference that legalising assisted suicide would “negatively affect the relationship between disabled people and society” and warned of the risk of people being “slowly” coerced into agreeing to an assisted suicide.

Instead of legalisation, she said, “we need to call for better funded social care and palliative care; that’s what makes the difference between a good life and a bad life for disabled people and that is being slowly eroded by the current administration”.

Marlow also campaigned on other significant issues affecting the lives of disabled people, including the closure of the Independent Living Fund.

She was a former student at the Hampshire residential special school and college Treloar’s, which saw scores of pupils with haemophilia given NHS blood contaminated with HIV and hepatitis in the 1970s and 1980s.

Her first husband, Simon Sedgwick – who she met at Treloar’s when they were both taking part in the school’s production of the musical West Side Story – was one of those who was given infected blood and later died.

Marlow later campaigned for justice for survivors and relatives of those who had been contaminated.

Reports suggest said that of 89 children with haemophilia who attended Treloar from 1975 onwards, all were infected with hepatitis or HIV, while only 16 are still alive.

He said: “My overriding memory of [Juliet and Simon] at school was just how grown up their relationship was compared to everyone else’s and how much in love they were.

“Whilst I was working up the courage to ask out my first girlfriend, they were making wedding plans. They married when Simon left college in 1992.

“I went down to stay with them a few times in their flat in Southampton, where we’d binge watch Juliet’s old Monty Python videos.

“We lost touch for a while after Simon’s funeral, but years later reconnected through the movement.

“In later life I greatly admired her campaigning work against assisted suicide, a deeply personal issue for her. Juliet truly managed to make the personal political.”

Ade Goodyear, another friend from Treloar’s, met her when he was 10 when they both started at the school in 1980.

He said she was a talented singer-songwriter and he performed alongside her in the school band, The Traill.

She sung lead vocals (as Juliet Boyd) on a song with an anti-drugs message, Don’t Chase The Dragon, that was recorded and released, and featured on the television programme Hearts of Gold in 1988, after the intervention of a record producer the students had sent their song to.

Goodyear said his friend “had the most remarkable ability to make life feel long, even to those who lives were shortened.

“Her friendship was simply life defining and kind, wrapped in the memories of the force for good Ju was and will always be.”

He said she was “an absolute joy to know and was always emotionally intelligent from a tender age.

“She was also a bundle of knowledge who had the most amazing way of listening without judgement and then offer such supportive advice that so often fitted any individual’s needs.

“She was so attentive, [and] emanated a calm but determined strength that made me and all that knew her proud to say so.”

In addition to her activism, Marlow was studying for a PhD at Southampton Solent University, where she was studying the changing representation of disabled people with physical impairments on television, and was a freelance writer and a former development worker for Hampshire Coalition of Disabled People.

She was also a singer and a member, alongside her second husband, Keith, of the rock/pop cover band The Marx Brothers Band.

Dennis Queen, an NDY UK activist, said the loss of their “fierce warrior” had left “such a big hole”.

She said Marlow had dealt with much of the day-to-day work of NDY UK “quietly behind the scenes, as well as writing many of our articles, giving interviews with the media, and getting on the streets whatever the weather, when we needed to protest.

“We’re going to be a bit lost without Juliet for some time. I’ll personally miss her astute guidance, excellent ideas and rational approach, as well as her fierce and fabulous personality. And her absolute refusal to ever budge off message.

“All of us at NDY UK wish to send our love and respect to Keith and the rest of Juliet’s family, and to thank them for sharing Juliet with us.”

Another leading NDY UK activist, journalist and presenter Mik Scarlet, said: “Juliet was one of those rare people who was driven by the feeling that she wanted to leave the world a better place than she found it.

“I hope that her family know she surely did that. Her passion and drive, and sense of humour, was infectious and made you want to do better.

“I’ll miss her so much, and will hold her in my heart, along with so many wonderful disabled allies we lost recently, whenever I campaign for that better world.”

Baroness Campbell said that Marlow’s loss would leave a significant campaigning hole, with NDY UK now “in desperate need of someone to carry on the work that Juliet gave so readily and with passionate commitment.

“She will never be replaced, but we must continue our fight against the dark forces of assisted suicide – that’s what she would want and expect of us.”