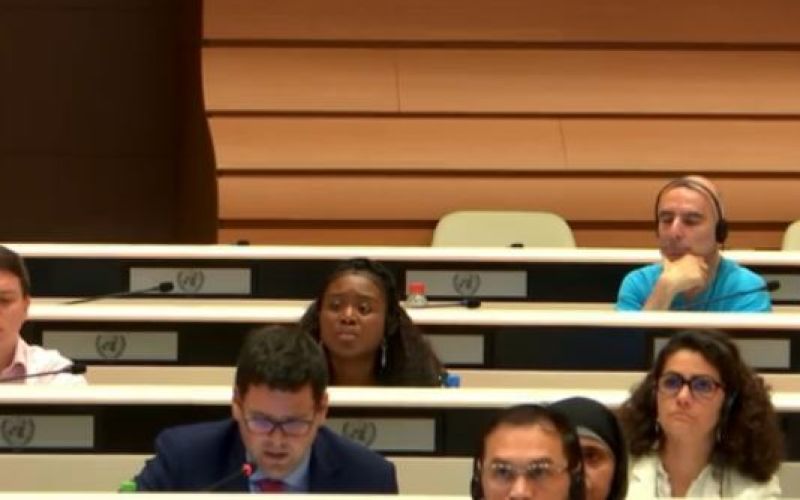 The assault came during a public examination in Geneva of the UK’s record in implementing the UN Convention on the Rights of Persons with Disabilities (UNCRPD).

Colin Caughey (pictured, speaking, in blue jacket), from the Northern Ireland Human Rights Commission, speaking on behalf of the four UK equality and human rights bodies tasked with monitoring the UK’s performance – known as the UK Independent Mechanism (UKIM) – suggested that the government had failed to realise the rights of disabled people, eight years after the convention was ratified by a Labour government.

He told the UN’s committee on the rights of person with disabilities, which was conducting the public examination this week: “Almost a decade on we find ourselves in Geneva reporting on a UK in which social security reforms have led to a finding by this committee of evidence of grave and systemic violations of the right to an adequate standard of living, right to social protection, right to independent living and right to work.”

But he said the committee’s “clear and measured” recommendations – based on “overwhelming evidence” – had not yet received “meaningful consideration” from the government, which had instead introduced “further regressive measures”.

He also pointed out that there were continued “gaps” in the legal protection provided by the Equality Act 2010.

And he said autistic people and those with learning difficulties “continue to be excluded from their communities by being placed in psychiatric hospitals, inappropriately, for lengthy periods of time”.

He also said that disabled people in prisons, hospitals, nursing homes and other institutions “continue to be subject to physical, chemical and mechanical restraint”.

Andrea Murray, from the Equality and Human Rights Commission, told the committee yesterday (Wednesday) that changes to legal aid in England and Wales were obstructing disabled people’s access to justice in areas such as housing and social security.

She called for “swift action to safeguard disabled people’s access to justice”.

And she warned that Brexit posed a “significant risk” of regression in disability rights protections.

They said that disabled people who need support to live independently in the community were “not getting help, or are only getting the bare minimum”.

The concerns are detailed in an updated report by the four bodies, which has been submitted to the committee.

David Isaac, EHRC’s chair, speaking on behalf of UKIM, said: “There is a real concern that disabled people are being increasingly marginalised and shut out of society as they bear the brunt of the accumulated impact of cuts in public spending.

“Disabled people have won hard fought battles in recent decades to ensure that they can live independently to exercise choice and control over their support.

“Evidence of regression must be confronted and urgently addressed.”