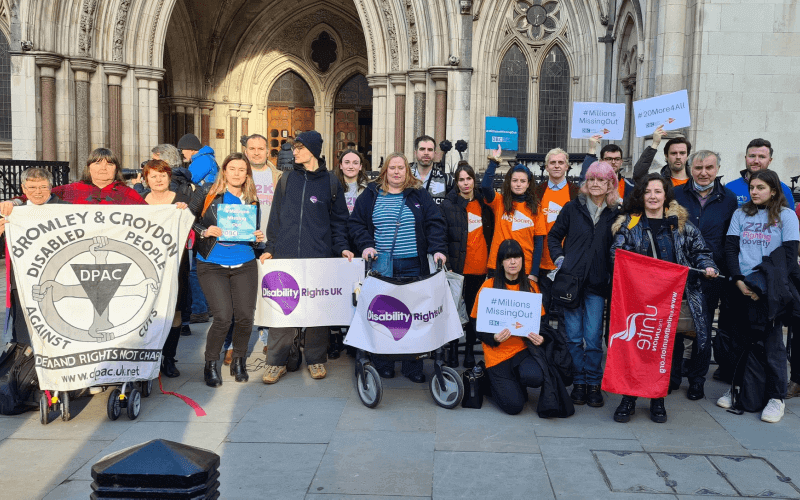 The government’s decision to treat claimants of universal credit more favourably throughout the pandemic than those receiving other benefits – including more than a million disabled people – was unfair, unjustified and discriminatory, the high court has been told.

Four benefit claimants are taking a judicial review case against work and pensions secretary Therese Coffey over her decision at the start of the pandemic to hand a £20-a-week increase to recipients of universal credit and working tax credit, but not to those on other means-tested benefits.

Their lawyers are arguing that by not extending the “uplift” to those on so-called legacy benefits – such as employment and support allowance (ESA) and jobseeker’s allowance (JSA) – Coffey had signalled a “radical and unprecedented departure” from decades of social security policy.

They argue that Coffey’s actions were discriminatory under the European Convention on Human Rights.

Disabled people and allies were outside the high court in London yesterday (Wednesday) morning on the first of two days of legal argument to show their support for the claimants, with the second day of the case due to take place tomorrow.

One of the disabled claimants taking the case, Philip Wayland, from Essex, said this week that he had decided to act on the “injustice” after 10 years of being “treated terribly” by the Department for Work and Pensions (DWP), particularly through the work capability assessment system.

He said that the failure to receive the £20-a-week uplift would have caused him significant financial problems if he had not been living with his mother.

Even so, their electricity bills have risen from £49 a month at the start of the pandemic to £89 a month, and now they have been told to find £124 a month.

He said the actions of the Department for Work and Pensions (DWP) had left him feeling that those people like him who cannot work were being “completely erased from society”.

He said: “It’s like we don’t even exist. I just think it’s disgusting.

“It’s that feeling of erasing a minority group – sick and disabled people – from any help, from the public consciousness, and feeling like we don’t matter and don’t exist.

“That’s how it made me feel.

“It was an obvious case of discrimination that I didn’t feel should be left to stand.”

Among those at yesterday’s demonstration (pictured) were disabled campaigners from Disabled People Against Cuts (DPAC) and Disability Rights UK, who have supported the case and campaigned for the uplift to be extended to those on legacy benefits.

In March, as part of its #20More4All campaign, DPAC delivered mail bags full of the testimonies of disabled people to DWP, the Treasury and 10 Downing Street, describing the financial struggles they had faced during the pandemic.

Ellen Clifford, a member of DPAC’s national steering group, who was at the demonstration, said Coffey’s failure to extend the uplift had come at the same time that disabled people had been in “desperate fear for their lives”, with about three-fifths of COVID-related deaths being of disabled people and many of those on legacy benefits left isolated and shielding for more than a year.

She said: “In the sixth richest country in the world no-one should be left too poor to bathe, too poor to do their laundry, too poor to eat and to heat.

“This is one injustice that could be put right so easily and at relatively little expense to the Treasury by providing a back-payment to those who lost out.

“It’s a terrible indictment that the attainment of justice once again rests on the backs of a few individual disabled people courageous enough to challenge the government in the high court.”

The £20 uplift came into force on 30 March 2020 and applied to the standard allowance of universal credit and the basic amount of working tax credit, but there was no equivalent uplift to the personal allowance of legacy benefit claimants.

This meant the standard allowance was significantly higher than the personal allowance for the first time, a move that the claimants’ lawyers said had “profoundly undermined the coherence of the UK social security scheme”.

The universal credit uplift was only removed by the government last month.

The claimants’ legal team has told the court that Coffey’s refusal to extend the uplift to those on legacy benefits had been achieved with “almost no democratic scrutiny” by parliament, and “limited analysis of the consequences”.

They say this meant that hundreds of thousands of disabled people, who were already disproportionately affected by poverty, have had to survive on “historically low rates” of benefits during a pandemic that has seen a significant rise in their cost of living.

They have produced evidence to show the court that deprivation caused by the pandemic has “disproportionately” affected disabled people.

It is believed that about 1.4 million disabled people on income-related ESA missed out on the uplift at the start of the pandemic, as well as hundreds of thousands more claimants who were receiving JSA and income support, many of them also disabled people.

Coffey argued last year that the difference in treatment between universal credit and legacy claimants was because of DWP technical problems, but DWP has told the court that the explanation is that new universal credit claimants faced greater financial disruption as a result of the pandemic, even though the uplift was not targeted at new claimants.

The claimants’ legal team, which includes solicitors from Osbornes Law, has told the court that there is no evidence that explains why new claimants might need more generous benefits than existing claimants, and it was therefore “manifestly unfair” to treat them differently.

They argued: “This straightforward failure to treat like cases alike is profoundly unfair, arbitrary and unjustified.”

DWP declined to share details of its legal defence with DNS, but a spokesperson said in a statement: “We do not comment on live court cases.

“It has always been the case that those on legacy benefits who think they may be better off on universal credit can make a claim.”