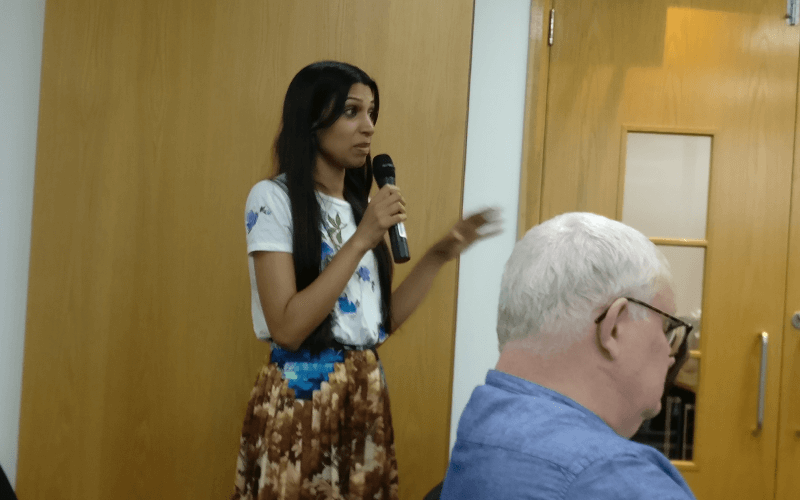 The politician aiming to oust Iain Duncan Smith at the next general election has described being motivated by the need to expose the “heartless” reforms he introduced as work and pensions secretary, and their impact on her late mother.

Labour’s Dr Faiza Shaheen said she wanted to win the Chingford and Woodford Green seat at the next general election in part because of the impact on disabled people of the government’s austerity cuts and reforms over the last decade.

Many of these were introduced by Duncan Smith when leading the Department for Work and Pensions between 2010 and 2016.

She was speaking at an event in central London held to launch a new book* by disabled journalist Frances Ryan, which investigates the impact of austerity on disabled people.

Shaheen (pictured) said she was also partly motivated in her campaign to win the seat by witnessing her mother – who died in 2017 – spend years fighting for the disability benefits and social care she needed.

She said: “Cleaning up her house, one of the most depressing things was finding all of the letters, just all of the admin in her last few years of her life that she had to do to fight for her benefits, to fight for social care. It was just heart-breaking.”

Shaheen has previously told the Huffington Post how her mother had faced a “fit for work” assessment to decide her eligibility for universal credit, the much-criticised new benefit system introduced by Duncan Smith when he was work and pensions secretary.

She told the Huffington Post last year that Duncan Smith had “wreaked so much havoc on people’s lives” and symbolised “so much cruelty and heartlessness”.

She told Saturday’s event that she was struck by how few people in his constituency knew about “what the Tories have done and specifically what their MP has done”.

She said there was “a lot more we need to do for people to understand and realise just how cruel the state has been”.

Shaheen said on Twitter after Saturday’s event: “Court rulings, damning UN reports, suicides – the welfare ‘reforms’ brought in since 2010, instigated by my rival Iain Duncan Smith, have not only been heartless, but a costly shambles.

“Tories need to be held accountable for this and so much more.”

She added: “Being in this room, listening to the harrowing stories of the impacts of benefit cuts, changes to pip and capability assessments strengthened my resolve to beat Iain Duncan Smith whenever that election comes.”

Shaheen, who describes herself as an “inequality geek”, and is director of the Centre for Labour and Social Studies (CLASS), told the event that she had been canvassing in Chingford and Woodford Green earlier in the day and had come across a disabled woman who had fallen in the street.

Shaheen’s husband had waited with the woman when an ambulance failed to arrive.

She told the event: “We were talking to her, someone comes just twice a week, she clearly needs more support, she hasn’t got family.”

She said the lack of social investment in care and support for the woman would now cost the state so much more, while the woman herself had gone through the trauma of falling in the street.

“She was like, ‘Don’t worry, just leave me here in the street.’ It’s so upsetting.”

Shaheen also warned the event that the state was now being viewed as a “punitive army” by working-class people because of the values of the politicians who have introduced those policies.

She said: “Partly it’s about lack of money but unfortunately it’s also about the culture, the culture that has developed.

“I’m not blaming the civil servants, those frontline workers, because they are incentivised in certain ways really to forget about the compassion, to forget about humanising.

“So it is something we need to think very seriously about, how we change the culture, not just more money but also a different set of principles and values.”

*Crippled: Austerity and the Demonization of Disabled People