You are here: Home / Benefits and Poverty / Budget: Chancellor’s WRAG decision is ‘misguided’ and ‘cruel’ 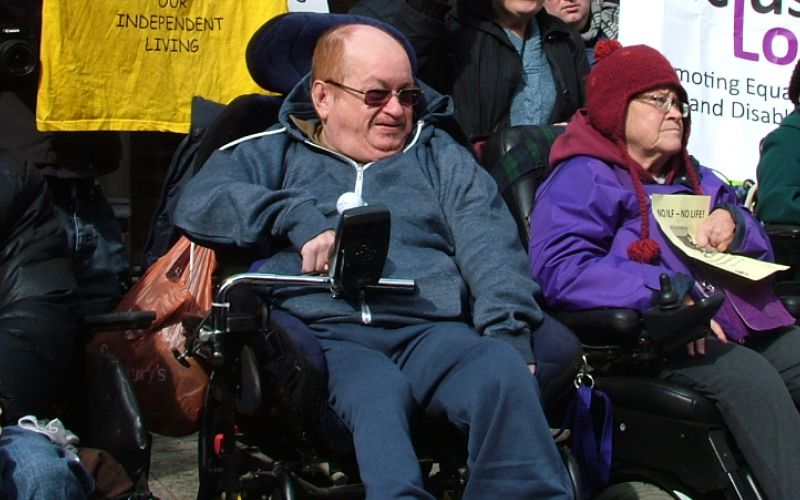 Disabled people and their organisations have branded this week’s budget misguided and cruel, and say it will drag many more disabled people into poverty.

Their chief target was the chancellor’s decision to remove – from April 2017 – the extra financial support given to new claimants in the work-related activity group (WRAG) of employment and support allowance (ESA), the out-of-work disability benefit.

But there were also warnings of the impact on disabled people of freezing until 2020 most working-age benefits, although not disability living allowance (DLA) or personal independence payment (PIP).

Another concern was over cutting the benefit cap from £26,000 to £20,000 a year for those outside London, and to £23,000 for those in the capital, although this again will not apply to those claiming PIP or DLA.

Sayce pointed to the decision to scrap the extra support given to disabled people in the WRAG – which at current rates would see weekly payments fall from about £102 a week to £73 – which she said was “a bitter blow”.

She said: “Many disabled people want to work. Becoming disabled through an accident, or getting cancer, or some other condition, can happen to anyone.

“Managing that kind of life changing event is hard enough; a 30 per cent drop in income makes it much, much, harder.”

Sayce also pointed out that many disabled people would be hit by the decision to lower the benefit cap.

She said: “Some disabled people are exempt from the benefit cap, but many are not – and that number is going to increase by around 20 per cent as disability living allowance is replaced by the new personal independence payment, which has much stricter criteria.”

Robert Punton (pictured), a member of Disabled People Against Cuts, who took part in a protest against the budget in Westminster yesterday, said Osborne had launched an attack on the social model of disability.

He said: “It is a return to the medical model: ‘We will look after you, we will put you back into institutions. We will stop you from contributing to your communities because we do not see you as having a value to our communities.’”

Peter Beresford, co-chair of the national service-user network Shaping Our Lives and professor of social policy at Brunel University, said: “The budget offers nothing positive and more problems for disabled people if they are in employment or seeking it or need the support of benefits.

“The budget cuts benefits but doesn’t address improving employment access or opportunities for disabled people; the traffic is in the opposite direction.”

But he suggested that the budget “may have the opposite effect to that intended”, as “more and more groups, individuals and families, young and older, are brought into the orbit of welfare reform”.

He said: “Instead of divide and rule, it may result in new understandings between groups, new alliances and new mobilising.”

Laura Stringhetti, of the WOWcampaign, said: “Lowering the weekly amount people receive when in the WRAG, which would be the same as claimants receive when on JSA, will have a profound, negative impact on many people.

“The amount of money JSA pays is enough to survive on a short-term basis; it is not enough to allow an adequate standard of living to people who might be unable, through no fault of their own, to find employment in a labour market often not prepared to employ chronically-ill and disabled people.

“This is another cruel blow, after several cuts to benefits and services that have already made it more difficult for disabled people to be included and contribute to society.”

He said: “Arbitrarily cutting £30 per week from sick and/or disabled people who, in a vast number of cases, have wrongly been found to have limited capability for work under the bogus work capability assessment regime – and so placed in the WRAG group with statistically no real hope of finding work and every chance of ending up destitute at food banks for failure to comply with conditionality – is an utterly despicable act of cruelty.

“Many will end up on the streets, or worse.

“On a wider scale, millions of families are about to experience immiseration on a scale not seen in Britain since the 1930s.”

Pat Onions, founder of Pat’s Petition, said Osborne had demonstrated the “total confusion” within the government about the nature of the WRAG.

She said: “People are put in the WRAG because they are tested by the work capability assessment (WCA) and judged currently not to be able to work.

“But once they are in the WRAG this result is ignored and they are treated as if their condition has miraculously improved and they can now get a job.

“So why is the government inflicting sanctions, time limits and now an income reduction to pressurise them into getting jobs?”

Meanwhile, the Institute for Fiscal Studies – whose work is often quoted by ministers – said that Osborne’s WRAG move would strengthen a disabled person’s incentive to be placed in the ESA support group, where claimants are not required to carry out any work-related activity at all.

The reaction to the budget on social media among disabled campaigners was equally critical.

Dr Sarah Campbell, who tweets at @spoonydoc, said: “Fairly surprised no one talking about reduction in disability benefit by A THIRD! #budget2015 Will just make people poor, not help get jobs.”

Disability consultant and campaigner Jane Young tweeted: “Reducing ESA for those in the WRAG confirms that Govt fails to understand extra barriers to work faced by disabled jobseekers.”

The disabled activist and blogger Steve Sumpter, who tweets at @latentexistence, said: “I’m currently in the ESA support group, and get DLA high-rate mobility. In theory I’m one of the vulnerable people Tories claim to protect.

Paul Farmer, chief executive of the mental health charity Mind, said: “Reducing the amount provided to those in the work related activity group of ESA from about £5,000 to £3,500 a year will make people’s lives even more difficult and will do nothing to help them return to work.”

He said: “It is unrealistic to expect people to survive on £73 a week for this length of time.

“We’re concerned that the impact of these changes will be felt by our overstretched NHS services, as these cuts hit individuals’ mental health as well as their pockets.”

He added: “It is insulting and misguided to imply that ill and disabled people on ESA will be more likely to move into work if their benefits are cut.

“The vast majority of people with mental health problems want to work but face significant barriers as a result of the impact of their condition and the stigma they often face from employers.”