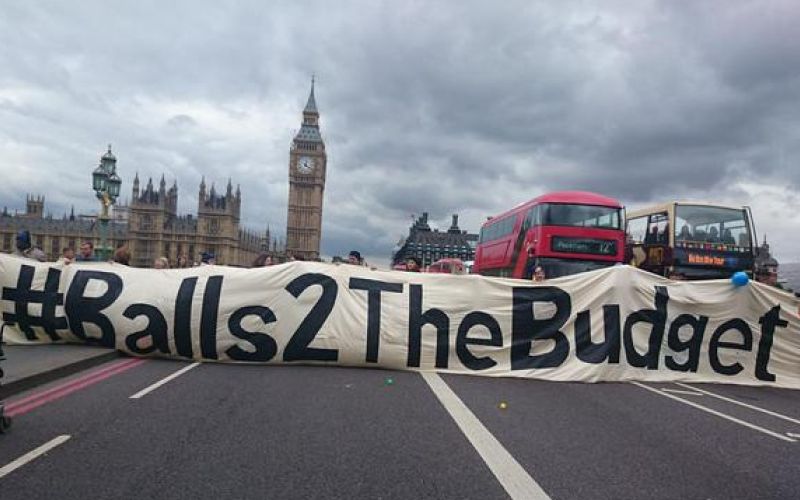 Disabled activists halted traffic around Westminster three times in a protest against further government austerity measures, just as Tory chancellor George Osborne was delivering a budget that will slash billions of pounds from disabled people’s support.

The #Balls2TheBudget protests began in Whitehall shortly before 11am yesterday (Wednesday) with activists from Disabled People Against Cuts (DPAC) – and supporters from other grassroots protest groups, such as WinVisible, Black Dissidents, London Latinxs, Occupy and Global Women’s Strike – halting traffic.

On a signal, they pelted the gates outside Downing Street with plastic balls, on which they had written anti-austerity messages.

Andy Greene, a member of DPAC’s national steering group, told fellow protesters: “There is no mandate for austerity, there is no justifying the cuts.

“We want to deliver our messages, and these balls, right down the heart of the British government.

“We want to deliver them right down Downing Street, to make sure that [Osborne’s] budget is scarred with our messages, that his budget isn’t the only narrative today, that we are the people, that we will have our say.

“We will, whether they like it or not, keep coming back and keep resisting.”

The protest moved on to Westminster Bridge, near where DPAC had hung a huge #Balls2TheBudget banner on the bank of the Thames, opposite the Houses of Parliament.

After retrieving the banner, they spread it across the road, forcing police to close the bridge – which overlooks parliament – to traffic for about an hour.

Protesters then moved to Parliament Square, directly outside the Houses of Parliament, where they blocked three key road junctions and brought traffic to a halt.

Robert Punton, one of the DPAC activists who took part in the protest, said: “We gridlocked the three intersections, which knackered up the centre of London, which got them really nervous.”

Police officers persuaded some protesters to move from the road but others refused, and four of them – three men, including Greene, and a woman – were arrested for highway obstruction and taken to a West End police station.

Some DPAC activists also attended a short parliamentary debate on the impact of the closure of the Independent Living Fund (ILF).

DPAC’s latest direct action protest came only two weeks after they came close to forcing their way into the main debating chamber of the House of Commons during prime minister’s questions, in a last-ditch protest against the ILF closure.

Punton said yesterday’s protest had been a “brilliant action that got the point over. I think we achieved what we set out to do, and probably more.

He said the hope now was to build on the protest of two weeks ago and the latest actions, and use them to shake potential supporters out of their apathy.

Punton said: “It’s now about building on what we did two weeks ago and what we did yesterday, and bringing the more apathetic population along with us.

“The slogan by the end of yesterday was, ‘Actions speak louder than words.’ Doing something positive rather than talking about it.

“We are trying to increase the number of people who get involved, because we can’t do this on our own.

“The result of this prolonged attack on disability is that people are trying to camouflage their disability, rather than being proud of being disabled. We are looking for disabled people to redefine themselves once again as disabled people.”

He added: “We were highlighting what was obvious to everybody, that we are again the groups that are paying for austerity.

“It is people like us who are paying the bill, not just financially but socially, such as with our involvement in our community.”

Punton said he believed police had only made the arrests because protesters from the mainstream grassroots group The People’s Assembly began turning up for their own Parliament Square protest.

Punton said: “That’s when the police thought, ‘Let’s put an end to this, because it could really get out of hand.’ They had to quash it.”