Disability charities are facing questions over why they helped the government disguise the reason it had to change “discriminatory” guidance that was preventing thousands of disabled people with invisible impairments from securing blue parking badges.

The Department for Transport (DfT) announced this week that it was proposing alterations to guidance that would “herald the most significant changes since the blue badge was introduced in 1970” and would “remove barriers to travel for people with conditions such as dementia and autism” in England.

Junior transport minister Jesse Norman claimed this “accords with the government’s manifesto commitment to give parity of esteem to mental and physical health conditions”.

The changes were welcomed enthusiastically by non-user-led disability charities such as Scope and the National Autistic Society (NAS), with NAS even quoted in DfT’s own press release, and they were widely supported by the mainstream media, including the Guardian, the Mirror and the BBC.

But what they and Norman failed to mention was that the changes had been forced on the government by a legal action taken on behalf of an autistic man with learning difficulties.

David* had had a blue badge for 30 years but was told by his local council that he no longer qualified because of new DfT rules**.

His family took legal action against DfT and his local council because of new guidance issued by DfT in October 2014, following the introduction of the government’s new personal independence payment (PIP) the previous year.

DfT was forced to settle the judicial review claim 15 months ago, by agreeing to review the new blue badge guidance.

It was that review that led to the government’s announcement this week that it was consulting on changes to the blue badge scheme.

Louise Whitfield, a solicitor with civil rights and judicial review experts Deighton Pierce Glynn, said she was “extremely surprised at the way in which the government is presenting the consultation”.

She said: “The main reason that people with those conditions have been excluded from blue badge eligibility is because of the changes that the government deliberately made to the blue badge criteria when they introduced PIP to replace disability living allowance (DLA).

“This meant that people who automatically had a blue badge before because of the DLA they received (higher rate mobility component), were no longer automatically eligible because they did not get enough points under the ‘moving around’ PIP criteria.

“This problem was compounded by the inadequate DfT guidance, leading many local authorities to decide that people with non-physical disabilities were not entitled to a blue badge, and would never be entitled, because they did not have the right kind of disability to meet the criteria.

“We have successfully challenged a number of these decisions, but there must be thousands of people who should have had blue badges but didn’t because of the change in the criteria coupled with the unclear guidance.”

She highlighted the government’s failure to carry out an equality impact assessment of the blue badge eligibility changes and the new guidance before they were introduced in 2014.

Such an assessment would have shown that thousands of people with invisible impairments were set to lose their right to a blue badge, with London Councils estimating that 3,500 people fell into this category in the capital.

Whitfield said: “It is also somewhat disingenuous of the government to present the consultation on the new proposals as if this had been all of their own making, when in fact many organisations, individuals and legal representatives on their behalf have been trying to get the government to undertake a review since the change in the blue badge criteria several years ago.”

She added: “We have repeatedly chased the government and their solicitors for updates on the review and have been told very little over the last 15 months.

“Nor have they had the courtesy to inform me or my client that the consultation is now underway.  The last time we chased them they didn’t even respond.

“Sadly, my client who brought the judicial review has now passed away, but I will be encouraging all my other clients to respond to the consultation making clear how devastating it has been for them to lose their existing badge and then have to battle for months, if not years, to get it reinstated just so that they can leave their home.”

In a statement, a DfT spokesman said: “Blue badges give people with disabilities the freedom to get jobs, see friends or go to the shops with as much ease as possible.

“We want to try to extend this to people with invisible disabilities, so they can enjoy the freedom to get out and about, where and when they want.”

An NAS spokeswoman admitted that it had “focused on the good news” in its statement on the government announcement.

She claimed NAS had opposed the government’s decision to link blue badge entitlement in England to only the “moving around” part of PIP mobility and had “raised this issue at the time and have continued to raise this issue since”.

She said its concern had always been “broader than the link with PIP” and that its “underlying aim has been to change the blue badge rules because it has always been a real struggle for those with a hidden disability to get one” and that “not very many autistic people ever qualified for higher rate mobility of DLA to get that automatic entitlement”.

She said NAS had not been “directly involved” with the legal case.

She added: “The government’s proposals go beyond that change and so are likely to ensure that more autistic children and adults who need a blue badge can get one and won’t first need to access DLA or PIP.”

**The guidance currently states that it is only those who qualify for the standard or enhanced mobility rates of PIP under the “moving around” criteria – those with physical impairments that mean they cannot walk very far – who should automatically qualify for a blue badge.

Those who qualify for the PIP enhanced mobility rate because they have problems planning and following journeys are no longer automatically entitled to a blue badge, as they were if they claimed the upper mobility rate of DLA for the same reasons.

The updated blue badge application form included in the guidance document has no sections in which disabled people with problems planning and following journeys can provide evidence to show why they need a blue badge.

Authorities in Scotland and Wales have already made changes aimed at addressing the problems with DfT’s guidance. 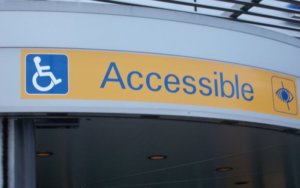