You are here: Home / Politics / Coronavirus: Disabled politicians call for Cummings to be sacked 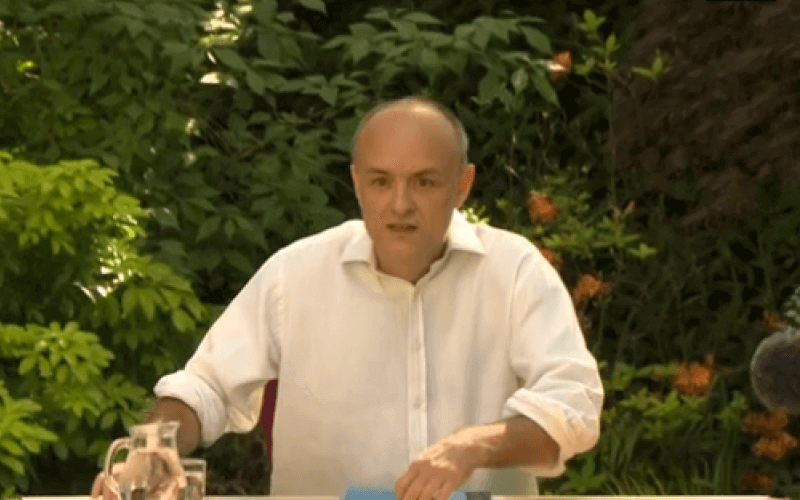 Disabled politicians – including both government and opposition MPs – have joined campaigners in expressing anger at the actions of the prime minister’s chief adviser, who has refused to apologise for breaking the government’s own coronavirus lockdown rules.

They have contrasted the actions of Dominic Cummings during a trip to Durham from his London home with those of millions of disabled people who have followed the government’s lockdown instructions, while also seeing their own rights attacked and their services cut during the pandemic crisis.

Among those criticising Cummings (pictured) was the disabled Tory MP Paul Maynard, who said he shared the public’s “collective dismay” at his actions.

He said these actions were “utterly indefensible” and that Cummings’ position as chief adviser to Boris Johnson was “wholly untenable”.

Maynard, a former transport minister who is MP for Blackpool North and Cleveleys, said: “So many people in this constituency have gone out of their way to stick to both the letter and the spirit of the guidelines and laws, despite it coming at great personal emotional cost.

“It is a classic case of ‘do as I say, not as I do’ – and it is not as if he was unfamiliar with guidance he himself helped draw up.”

Another disabled Tory MP, and former minister, Robert Halfon, had to apologise after originally writing a tweet that supported Cummings, who he said was merely driving more than 260 miles with his wife – while both were ill – to “ensure that their small child can be looked after properly”.

He wrote a Facebook post to apologise to his constituents in Harlow for his tweet, and to make it clear that he does not “condone anyone who has broken the law or regulations”.

He said: “It is important for everyone to follow public health advice, that includes members of the government and their advisors.

“If those regulations or laws have been breached there should be serious consequences.

“The tweet was wrong because many thousands of people in Harlow and across the country have suffered and struggled enormously during the coronavirus.

“It has caused significant pain and hardship. My tweet did not recognise that. I am sorry.”

For Labour, Marsha de Cordova, the disabled MP for Battersea and shadow secretary of state for women and equalities, said Cummings’ actions were “an insult to the British people and to all those who have sacrificed so much”.

And Vicky Foxcroft, Labour’s shadow minister for disabled people, who is herself self-isolating because she is on immunosuppressant medication for rheumatoid arthritis, which places her among those most at risk from COVID-19, condemned the actions of Cummings, and the prime minister for supporting him.

She said she had heard from many people who, “in similar or more difficult circumstances, did as the Government had advised and stayed at home to protect the NHS and save lives”, including “countless people who were unable to visit dying relatives”.

She said: “The message from this government is clear: it’s one rule for Boris Johnson’s closest adviser and another for everybody else.”

Baroness [Sal] Brinton, the disabled peer and former president of the Liberal Democrats, was another to call for Cummings to lose his job.

She said: “If he doesn’t resign the PM should sack him, and if that doesn’t happen, the cabinet secretary should have an investigation.”

She said the scandal was “distracting from serious COVID problems”, including a spike in cases at Weston General Hospital in Somerset.

Another disabled politician, Pam Duncan-Glancy, who stood for Labour in Glasgow North at December’s general election, told Twitter followers how she had attended her father’s funeral during the pandemic crisis but had to spend it two metres apart from her sister.

After the service they “couldn’t go home to the same house to laugh, cry and remember him together”.

She said, in response to the emerging details of Cummings’ trip to Durham: “We did the right thing, even though it felt so much like the wrong thing. I am seething tonight.”

The crossbench disabled peer Baroness [Jane] Campbell compared watching Cummings explain his actions at a press conference in the Number 10 garden on Monday to the “stomach churning interview with Prince Andrew” which followed the allegations the disgraced royal faced about allegations of sexual misconduct.

The disabled journalist Dr Frances Ryan, another who is having to shield during the pandemic, said on Twitter: “Not being mentioned but I really feel for people shielding.

“It’s hard enough seeing everyone else out and meeting friends but knowing people like Cummings were travelling (likely already infected) makes you feel even less safe.

“How can we ever go out if rules aren’t enforced.”

Fazilet Hadi, head of policy for Disability Rights UK, said in a statement that her organisation was “incensed and incredulous” that the government was “excusing Dominic Cummings’ needless travel”.

She said this was happening when many disabled people had rightly been instructed “to do the exact opposite and shield, without movement, often with inadequate adjustments and resources to do so safely”.

She said: “There are countless families up and down the country who have survived COVID-19, alone, without carers and PAs, with children with physical, mental and behavioural impairments, who have adhered to this lockdown to the letter, because it is the right thing to do, not just for their families, but for the greater good.”

She said disabled people had had their rights to care reduced, had lost their personal assistants, had had “huge difficulty” accessing food and medicines, and endured increased costs of living during the coronavirus lockdown.

She said: “That government is now excusing one of its senior employees for breaking the rules is a slap in the face for every single disabled parent and family with a disabled child, who has locked down, stood fast with their community, endured hardship, and endured coronavirus symptoms with little to no support.

“Disabled people who have had to shield have had no contact with the outside world for close to three months.

“Many live in flats, with no access even to sunshine and fresh air, let alone outside exercise.

“The government would do well to remind itself that we are all in this together. That the rules are not a pick and mix. And that in such circumstances, its inner circle needs to lead by example, not convenience.”