You are here: Home / Activism and Campaigning / Coroner orders inquest into ‘fit for work’ man who collapsed after leaving jobcentre 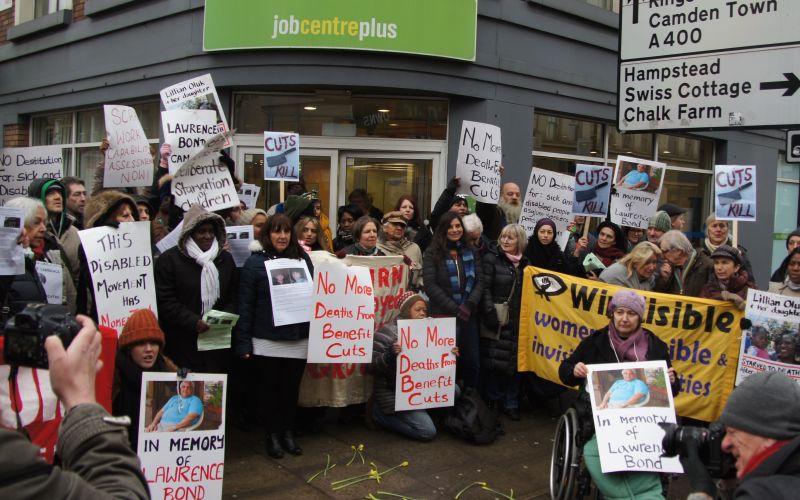 About 100 activists and their allies have taken part in a protest and vigil to mark the death of a disabled man who died minutes after leaving a jobcentre… six months after a government contractor found him “fit for work”.

Lawrence Bond is said to have collapsed on the pavement shortly after leaving Kentish Town jobcentre, following a back-to-work appointment.

He was reportedly awaiting the result of an appeal against being found fit for work and therefore ineligible for employment and support allowance (ESA), the out-of-work disability benefit.

Disability News Service (DNS) has confirmed with the London Inner North coroner’s office that there will be an inquest into his death later this year.

The inquest could be heard by the same coroner, Mary Hassell, who found in January 2014 that a disabled man, Mr A*, had taken his own life as a direct result of being found fit for work and ineligible for ESA, following a work capability assessment (WCA).

That verdict, and the “prevention of future deaths report” that Hassell sent to the Department for Work and Pensions – warning that other disabled people with mental health conditions could die if DWP failed to take urgent action to make the test safe – have proved hugely significant in the continuing campaign to scrap the WCA and hold ministers accountable for their failings, and for the deaths of other benefit claimants.

Although the circumstances of the two deaths are different, DNS understands that Lawrence Bond was found fit for work in July 2016 following a face-to-face assessment at the same examination centre that found Mr A fit for work in 2013.

Claire Glasman, from WinVisible, said friends of Lawrence Bond had travelled from as far as Brighton and Somerset to attend the protest.

She said: “We wanted to pay our respects to Lawrence Bond first of all, so his death didn’t get passed over. Every life matters.”

But she added: “We have just had it with people dying like this.”

She said WinVisible had supported many disabled women who have either been unfairly found fit for work, or have lost their benefits because of a failure to attend a WCA.

One woman, with the chronic lung condition COPD, lost her ESA for several months after Maximus rejected her excuse for being 10 minutes late for an appointment: that she couldn’t run to catch a bus because of her COPD.

Glasman told DNS: “It all took months. Meanwhile, she lost weight, her only income was disability living allowance, and she was having to go round to someone else’s house for food.”

Film director Ken Loach also spoke at the protest, and was among those to have drawn a comparison between Lawrence Bond’s death and the main character of his film I, Daniel Blake, which was released last year.

The film features a man with a long-term health condition who is found fit for work through the WCA process, and eventually collapses and dies while trying to appeal that decision.

Asked whether DWP was concerned about Lawrence Bond’s case, and whether it had launched an internal investigation, a DWP spokeswoman said: “The local jobcentre had been supporting Mr Bond and our sympathies are with his family at this difficult time.

“ESA decisions are made following a thorough assessment and after considering all of the evidence, including that provided by a claimant’s doctor or other medical professionals.

“Anyone who disagrees with a decision can ask for it to be reconsidered, and if they still disagree they can appeal.

“The details of Mr Bond’s death have not yet been confirmed and there has been no inquest.”

Maximus had not responded to requests to comment by noon today (Thursday).