You are here: Home / Benefits and Poverty / Coroner silent on why DWP was not questioned at inquest, despite ‘nightmare’ messages 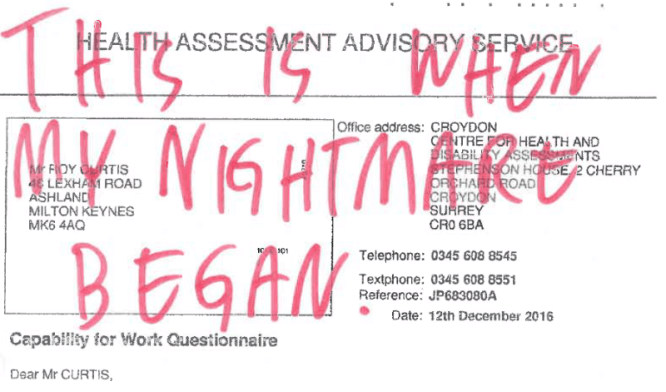 The Department for Work and Pensions (DWP) was not questioned about an autistic man’s suicide at an inquest, despite the bundle of evidence presented to the coroner containing multiple distressing messages he had scrawled on letters about his benefits.

A police officer who was called to Roy Curtis’s flat after his body was discovered in August 2019 found a folder of letters in which he had written desperate messages about his disability benefits “nightmare”.

The folder contained more than 10 letters from DWP, its contractor Maximus, and HMRC, on which Curtis wrote messages demonstrating how the government’s fitness for work process was causing him significant mental distress.

His messages warned that the work capability assessment (WCA) system was causing him extreme anxiety, and that he would take his own life if he could not secure the benefits he needed to survive.

Although the inquest into his death took place last December, this is the first time that the existence of all these messages has been revealed publicly.

Both DWP and Maximus appeared to confirm last night (Wednesday) that they had not been asked by the coroner to give evidence at the inquest.

Curtis’s parents are among relatives of disabled benefit claimants whose deaths have been linked to DWP’s failings and who will be interviewed for a Dispatches documentary – produced in association with Disability News Service (DNS) – that will be aired at 7.30pm on Channel 4 tomorrow (Friday).

The failure of Milton Keynes coroner Tom Osborne to require DWP civil servants or senior figures from Maximus to give evidence at the Roy Curtis inquest contrasts with the actions of another coroner, Gordon Clow, who took evidence in January from a series of DWP and Capita witnesses during the nine-day inquest into the death of Philippa Day.

That evidence led to Clow concluding that flaws in the disability benefits system were “the predominant factor and the only acute factor” that led to the young disabled mother taking her own life.

DNS has seen a digital version of the written evidence presented to the inquest into the death of Roy Curtis.

It shows how he repeatedly scrawled messages in red ink on letters he had received from DWP and Maximus – which carries out WCAs on the government’s behalf – and left them to be found after he took his own life.

One of the letters had been sent by Maximus in December 2016, and informed Roy Curtis, who was receiving incapacity benefit at the time, that he would shortly be reassessed for the new employment and support allowance.

On this letter (pictured), he had written: “This is when my nightmare began.”

On another letter, sent the following month, Maximus told him to attend an assessment centre in the centre of Milton Keynes for a face-to-face WCA, and on which he had scrawled: “I can’t go to MKC because of panic attacks. I was refused a home visit.”

The assessment appears to have been rescheduled and took place instead in Aylesbury.

On this letter he wrote: “So I had to go far away on a stressful trip.”

There are further letters that show how he was forced to attend a meeting with a DWP work coach, on one of which he wrote: “I went with support in extreme duress. She told me I would be OK and contacted in six months. Nothing.”

On a DWP letter he received the following year, telling him his ESA was being removed because of his failure to attend a WCA, he wrote: “No shit! I don’t need one.”

He also wrote: “I have said over and over again I am unfit for work.”

On another page of the same form, he had written “not fit for work” eight times.

The 27-year-old took his own life on or about 18 November 2018, six days after being told to attend another WCA, despite DWP being repeatedly warned its actions had made him suicidal.

The letter telling him he needed to attend the WCA had been generated by DWP’s computer system “without a person checking on the circumstances of the individual”, DWP later admitted.

Detective constable Lucy Jarrett, who found the letters, said in a statement submitted to last year’s inquest: “The words across the letters were as if the author had been distressed about his situation and that benefits and allowances had been stopped and he had been asking for help from various agencies.”

There were also repeated references by other witnesses to the impact on his mental health of the loss of his benefits and the anxiety he experienced at the thought of having to work.

In March 2017, the inquest heard, Curtis had handed over a letter from his partner at a WCA, which stated that the assessment process and the thought of having to prepare for work caused him to have “suicidal thoughts”.

Despite that letter, he was placed in the ESA work-related activity group, and the following year, on 15 August 2018, he was told his ESA was being removed completely because he had failed to turn up to a WCA in April 2018.

Curtis then drew up a lengthy suicide note in which he said he would end his own life on 19 September because DWP had decided to terminate his benefits, which meant he was “no longer able to pay rent or afford to eat”.

Before he could take his own life, police were alerted by an online friend and he was admitted as a voluntary inpatient to the Campbell Centre, a mental health unit in Milton Keynes, on 13 September.

While he was an inpatient, a mental health support worker took on his benefit case and wrote to DWP asking for the decision to be reviewed, including a letter from a consultant psychiatrist explaining that the thought of work made Curtis feel suicidal.

His benefits were reinstated and backdated the following day, 5 October, and he was discharged from the Campbell Centre the same day.

His discharge summary stated: “Main triggers and stress were his benefits which were stopped… RC expresses stress and pressure that he was placed under the employment activity of the ESA benefits… He admits things are better since his money was paid and benefits restored.”

But just a few days later he received another DWP letter, telling him he had been placed back in the ESA work-related activity group and so would need to attend regular appointments.

A month later, on 12 November, Curtis was sent a letter by DWP telling him he needed to attend another WCA, on 3 December.

Six days later, he took his own life.

Despite all this evidence, no-one from DWP or Maximus gave evidence at the inquest, or appears to be have been asked to do so.

Curtis’s parents are still seeking a solicitor to help them take legal action against DWP and against Milton Keynes council, the two organisations they blame the most for their son’s death.

They believe the coroner should have held both DWP and Maximus to account at the inquest, and that her son had left the letters he had written to be found so that his battle with DWP could be told after his death.

His mother, Anabela, told DNS: “DWP failed to follow the signs that my son had hidden disabilities.”

She believes her son posted copies of his pleas for help to DWP, although she is not able to prove this, and that the notes are “something he would want us to fight for”.

His father, Fuad, believes his son’s notes “tell the story of his struggle with DWP”.

He said: “DWP policies need to change. Too many lives have been lost.”

By the time the council’s social services department attempted to contact him, he was dead.

Curtis’s body was only discovered nine months later, in August 2019, when a bailiff arrived to evict him from his housing association flat for non-payment of rent.

He had cut himself off from his family in 2013 and changed his name from Ayman Habayeb. His family had tried unsuccessfully for many years to track him down.

Osborne also heard the inquest into the death of Stephen Carré nearly 12 years ago.

Following that inquest in 2010, Osborne became the first coroner to draw a link between the flawed WCA and the death of disabled benefit claimants, concluding that the decision to find Carré wrongly fit for work had been the “trigger” that led him to take his own life.

After that inquest, Osborne wrote a prevention of future deaths report which called on DWP to make changes to the WCA system to prevent further such deaths.

That report did not emerge publicly until it was found by DNS in autumn 2015, and it has since helped to prove how the failure by DWP ministers to take the necessary action in response to Osborne’s warning had led to many other such deaths.

But Osborne’s failure to question DWP civil servants at the Roy Curtis inquest meant there was no opportunity for a similar call for safety improvements to the WCA system or to other DWP or Maximus policies and practices.

A spokesperson for the coroner said: “Mr Osborne as the senior coroner for Milton Keynes is an independent judicial office holder and as such it would be inappropriate for him to comment on articles that may appear in the press or online.”

DWP refused to say if it was asked to give evidence at the inquest, if it would apologise for its role in the death of Roy Curtis, or if Curtis had posted copies of his messages to the department.

But a DWP spokesperson said in a statement: “Our sincere condolences remain with Mr Curtis’ family.

“We will always cooperate fully with the coroner in cases where we are asked to do so.”

Maximus also refused to say if it had been asked to give evidence at the inquest, but it also confirmed that it would always cooperate fully with an inquest when asked to do so by a coroner.

A Maximus spokesperson added: “Our deepest condolences go to the family of Mr Curtis.

“The role of Centre for Health and Disability Assessments** is to carry out a functional assessment of how a condition impacts on day-to-day life so DWP can make a decision on an individual’s eligibility for benefits.”

*This description has been removed by DNS as it refers to a method of suicide. It was the same method that Roy Curtis would eventually use to take his own life

***The following organisations are among those that could be able to offer support if you have been affected by the issues raised in this article: Samaritans, Papyrus, Mind, SOS Silence of Suicide and Rethink