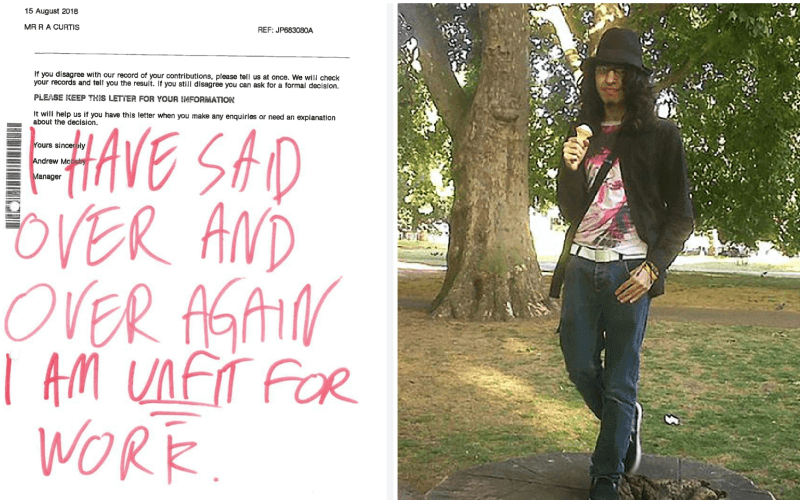 A disabled man took his own life six days after being told to attend a “fitness for work” assessment, despite the Department for Work and Pensions (DWP) being repeatedly warned its actions had made him suicidal, an inquest has heard.

The death of 27-year-old Roy Curtis, who died on or about 18 November 2018, is just the latest over the last decade to expose DWP’s failure to protect disabled benefit claimants from harm.

The DWP actions that contributed to his suicide particularly mirror those that led to the death of Errol Graham, who starved to death earlier the same year after his benefits were removed.

Just as with Errol Graham, the body of Roy Curtis – who was autistic and had significant experience of mental distress – was only discovered when a bailiff arrived to evict him from his flat, months after his benefits had been removed.

Curtis’s body was not discovered until seven months after his employment and support allowance (ESA) and other linked benefits had been stopped and nine months after he died.

Both Roy Curtis and Errol Graham had their benefits stopped after failing to attend a face-to-face work capability assessment (WCA), and without DWP speaking to them before ending their claim.

And both men had spent time as inpatients in mental health units, information which had been passed to DWP.

In another echo of Graham’s death, DWP stopped Curtis’s ESA in January 2019 after making two unsuccessful visits to his home to ask why he had not attended a face-to-face WCA.

On both occasions, the DWP officer noticed that letters alerting Curtis to the visits were still in the mailbox along with other post, according to a safeguarding adults review into his death that was published by the Milton Keynes Together Partnership (PDF) last week.

His housing association and the local social services department also attempted to contact Curtis (see separate story), but they and DWP did not communicate with each other.

The decision to ask Curtis to attend a face-to-face assessment, and then to remove his benefits when he failed to attend, was taken even though DWP had years of evidence of the impact of the WCA process on his mental health.

The safeguarding adults review said DWP had admitted that the letter telling Curtis he needed to attend the WCA had been generated by its computer system “without a person checking on the circumstances of the individual”.

DWP apparently made no further effort from January 2019 to check on his welfare or to contact other agencies, despite his history of mental distress and suicidal ideation. By then he had been dead for two months.

But despite repeated references by witnesses to the impact on his mental health of the loss of his benefits and the anxiety he experienced at the thought of having to work, and the apparent acceptance that being forced back into the WCA process triggered his suicide, no-one from DWP gave evidence to the inquest this week.

The inquest heard that DWP and its contractors had been told repeatedly of the harm that the “fitness for work” process caused to Curtis’s mental health.

In March 2017, Curtis had handed over a letter from his partner at a WCA, which stated that the assessment process and the thought of having to prepare for work caused him to have “suicidal thoughts”.

That letter warned DWP that Curtis was “not only an unsuitable person for any work environment but would be severely endangered by any finding that he was suitable for work or any work-related activities” and that “any such finding would put him at an immediate threat of suicide”.

Despite that letter, he was placed in the ESA work-related activity group, and the following year, on 15 August 2018, he was told his ESA was being removed completely because he had failed to turn up to a WCA in April 2018.

Curtis then drew up a lengthy suicide note in which he said he would end his own life on 19 September because DWP had decided to terminate his benefits, which meant he was “no longer able to pay rent or afford to eat”.

He said in that document: “I cannot be bothered to fight this anymore. I am out of energy. I only exist to do what I want to do; dealing with paperwork, making phone calls, and feeling anxious every day about whether I am going to be homeless are things I do not want to do.”

Before he could take his own life, police were alerted by an online friend and he was eventually admitted as a voluntary inpatient to the Campbell Centre, a mental health unit in Milton Keynes, on 13 September.

While he was an inpatient, a mental health support worker took on his benefit case and wrote to DWP asking for the decision to be reviewed, including a letter from a consultant psychiatrist explaining that the thought of work made Curtis feel suicidal.

His benefits were reinstated and backdated the following day, 5 October, and he was discharged from the Campbell Centre the same day.

But just a few days later he received another DWP letter, telling him he had been placed back in the ESA work-related activity group and would need to attend regular appointments.

He told a mental health professional from the acute home treatment team (AHTT) that work “made him stressed and anxious” and that he would rather die than have to work.

A month later, on 12 November, Curtis was sent a letter by DWP telling him he needed to attend another WCA, on 3 December.

Dr David Marchevsky, the consultant who had been in charge of his care at the Campbell Centre and had helped to have his benefits reinstated, told the inquest: “I didn’t envisage that the [DWP] were going to do the same thing and they were going to do it so quickly after the discharge.

“They were told the reasons he had been admitted. That information was given to them.

“I had no idea that was going to happen.”

The AHTT told Curtis to see his GP, who agreed on 15 November to write a letter to explain to DWP that he needed a home assessment, because he was worried that visiting the city centre assessment centre for the WCA would set off a severe anxiety attack.

Tom Osborne, the senior coroner for Milton Keynes, said there was no evidence that he ever collected the letter from the surgery.

Dr Romi Babatunde, a partner at the surgery, told the inquest: “He identified his main trigger as the benefits and the expectation that he should work and that he should look for work.”

Osborne told the inquest that the letter he received from DWP in November “obviously caused Roy considerable anxiety and distress”.

The coroner said he believed that Curtis took his own life three days after the GP appointment, on or about 18 November 2018.

The housing association eventually issued an eviction notice in April 2019.

His body was discovered on 21 August 2019 when a bailiff arrived at his flat to evict him.

The inquest heard that a police officer who attended the scene had found a folder of letters with red letters scrawled across them, as if Curtis was “distressed” that his benefits had been stopped.

By the time his body was discovered, Roy Curtis had been dead for more than nine months.

Osborne concluded that he had taken his own life on or about 18 November 2018 and that it was “an indictment on all of us as a society in Milton Keynes that his body lay there undetected for so many months”.

Curtis had cut himself off from his family in 2013 and changed his name from Ayman Habayeb. His family spent years trying unsuccessfully to track him down.

Osborne told his family this week that he “deserves to be remembered for more than just the way that he died”.

The safeguarding adults review suggests that DWP’s safeguarding procedures have been improved since Curtis’s death.

Disability News Service reported in July how DWP had made changes that appear to have been influenced by the publicity in January and February this year surrounding Errol Graham’s death.

This appears to be confirmed by the safeguarding review, which says it was told: “Where DWP is unable to make contact with an individual after two ineffective safeguarding visits, additional checks will be put in place.

“The claim will not be automatically closed but escalated to a senior safeguarding lead who will liaise with the NHS, police and adult social care.

“Under the new guidance, ending benefit entitlement will become the last resort.”

DWP refused to comment on the circumstances of Roy Curtis’s death this week, and refused to say how it defended its actions, and whether it would be apologising to the family.

But a DWP spokesperson said: “Our thoughts remain with Mr Curtis’ family and friends at this difficult time.”

Picture: Roy Curtis (right), and a letter he received from DWP in August 2018, with his words written across.