You are here: Home / Housing / Council shamed into action after ‘years of neglect and discrimination’ 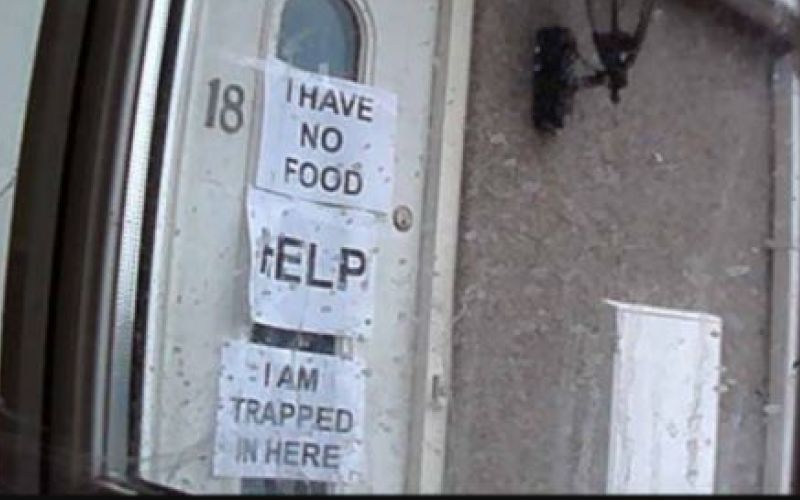 A local authority has been shamed into taking action after years of alleged neglect and discrimination left a disabled activist starving, freezing, and his home so full of rubbish that firefighters said it was too dangerous to enter.

Mark White has been left so desperate at the lack of support, money and food that – on the advice of a helpline adviser – he taped signs saying “HELP”, “I AM TRAPPED IN HERE” and “I HAVE NO FOOD” to his front door (pictured).

A postal worker who saw one of the signs called the police – who subsequently visited his house and later contacted the council to raise their concerns – while a passer-by knocked on his door to hand White a bag of pasta and a tin of soup.

He has also been relying on emergency food parcels provided by organisations that have offered him telephone support, while the postal worker also gave White her sandwiches after seeing his sign.

Cornwall Council has now been alerted to his case by the local ambulance service, police, the Samaritans charity, Diabetes UK, and the anti-hate crime charity Stop Hate UK.

Disability News Service (DNS) has seen pictures showing his kitchen facilities blocked off by months of rubbish he is unable to clear himself because of his impairments.

He also says that he is unable to pick his post off the floor, and so cannot respond to the council’s letters, has no money or food because his benefits have been stopped since March, and has had no access to a bath or shower for more than three years.

Pictures also show that a leaking toilet has left mould around his toilet, which White says has been a problem for three years.

But White has since shown DNS forms that he signed in September which gave permission to both the council and its arms-length body Cornwall Housing to share information about his case with other organisations.

The council has not denied that these forms exist.

Cornwall Housing wrote to White in September, agreeing to clear the rubbish, and the mould, and fix other problems, but no action has yet been taken.

Now the council has agreed to set up a meeting with White tomorrow (15 December), nine months after it was supposed to take place.

White believes the council’s failings are so extreme that it is guilty of disability hate crime.

He said: “When you have to fight this hard to push back against negative and even negligent attitudes because you are disabled, it just shows that disabled people still have little to no human rights here in the UK.

“The more isolated you are and the more vulnerable, the more readily you can be abused.”

He said it appeared that the meeting was only happening now because DNS had “embarrassed them into action”.

He said he had still not been told if there would be an advocate to support him at the meeting.

He added: “I’m terrified of Friday and being abused and stitched up by all those who failed and colluded.”

He said his case showed that the “devastating destruction of support and even legal protections in rural UK in the last decade is beyond crisis now – as is the total lack of accessible housing”.

Stop Hate UK has raised concerns about his situation.

Rose Simkins, chief executive of Stop Hate UK, said: “Mr White has been in contact with our service since 2016.

“Following his reports and concerns raised around his current living situation, we have sent several referrals to Devon and Cornwall Police and as a result are aware that there are a number of organisations involved in seeking support and action for Mr White.

“Stop Hate UK absolutely recognises the situation that Mr White is in and is, of course, extremely concerned for his welfare and have raised this on many occasions.”

She added: “Hate crime is often complex and does require a multi-agency approach to seek out resolution and action for those affected.

“Stop Hate UK believes that circumstances such as these require a joined up creative way of working, to try to resolve issues and always recommends a single point of contact be established, where all aspects of the case and need can be reviewed and actioned – we have recommended this approach in Mr White’s case.”

A spokesman for Devon and Cornwall Police said: “An officer did attend the address, and following this, a referral has been made to Cornwall adult services.

“There is no criminal aspect being looked into by police.”

A council spokeswoman said: “The council and its partners take their responsibilities very seriously.

“Where a person has complex needs and is not willing to engage with services that have been offered, a multi-disciplinary group, which includes social workers, housing officers, representatives from the fire service, the police, health professionals and voluntary organisations will work together and with the resident to try and offer alternatives and solutions.

“In this case, the many services who are involved are committed to trying to help him but they do need his co-operation.

“The agencies also have a duty of care to the health and safety of their staff who have a right to expect that they are treated in a civil manner.”

But White said: “I have to remember that having PTSD and having buttons deliberately pushed by council employees to cause distress and damage is always my fault.

“I’m bemused by the council’s repeated claims of my supposed failures to engage.

“The council have made it impossible to engage with others when they have bad mouthed me to groups such as the Red Cross, local disability charities, councillors and even food banks.

“Being told that a food bank can’t bring food to you because they have been told you are not to be engaged with by adult social care smacks of giving a dog a bad name to justify beating it.”

He said he had had one councillor “bellow down the phone that he’s been told not to come to the door as I am supposedly too dangerous to visit”.

He said the council had failed to organise “a supposed urgent multidisciplinary team meeting” which he was told about in March, and had failed to carry out two care assessments, one in 2014 and another – after a request by the police – in 2016.

He added: “I’m aware of obligations under the Health and Safety at Work Act (I used to work in a most intense health and safety environment), but the council must also balance any such claim against the need to protect a vulnerable adult from neglect and institutional abuse.

“I fear that Cornwall Council have an unbalanced view of their legal obligations and how to meet them.

“They also withhold information in a way that breaches best practice, is coercive and in a manner designed to disadvantage.” 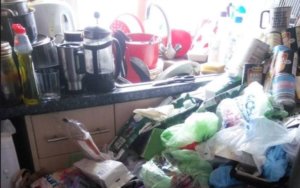