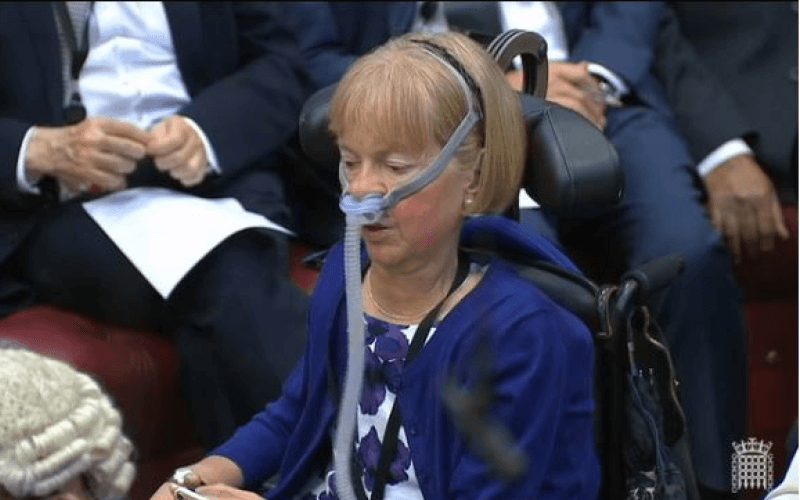 A disabled peer was forced to miss the state opening of parliament after London Underground failed yet again to alert wheelchair-users to broken lifts on the network, despite a critical court ruling in January.

Baroness [Jane] Campbell (pictured) was forced to retrace her steps on the tube network to Waterloo station, and then wheel in the wind and rain to the Houses of Parliament, after she arrived at Westminster station to find the lifts were out of order.

By the time she arrived at the House of Lords, it was too late to take her place for the Queen’s speech.

She has already written to Transport for London’s chair and chief executive about her experience, and she plans to raise it with a transport minister.

The crossbench peer, who has spinal muscular atrophy and has repeatedly had to be admitted to hospital with life-threatening chest infections, told Transport for London (TfL) that “wheeling in the cold has its own dangers”.

The latest London Underground failure comes just months after a judge ruled that it twice discriminated against a disabled campaigner by failing to warn him that vital lifts that would allow him to complete his journey on the tube network were out-of-order.

Doug Paulley found himself stranded and confronted with inaccurate and incomplete information and unhelpful staff on trips to London in October 2016 and May 2017, a similar situation to that faced by Baroness Campbell on Monday.

A judge ruled that London Underground breached its duty to make reasonable adjustments for its disabled customers by failing to let Paulley know about lift closures on its network.

The judge ruled that it was not reasonable for London Underground to expect wheelchair-users and other passengers who rely on lifts to check the organisation’s website for closures before every journey they make.

London Underground was told to do more to alert passengers when its lifts were out of order across the 12 stations with step-free access in the central zone – which include Waterloo and Westminster – which should include placing white boards at station entrances to ensure passengers know about problems before they start their journey.

This does not appear to have been done on Monday and led to Baroness Campbell missing the Queen’s speech.

Paulley said it appeared from Baroness Campbell’s experience that London Underground had failed to act on January’s court ruling.

Mark Evers, London Underground’s chief customer officer, said: “I would like to apologise to Baroness Campbell for her recent experience on the tube which fell far short of the customer service that we strive to provide.

“Making London’s transport network more accessible is one of our top priorities and we understand how challenging it can be for our customers when lifts are taken out of service, either for planned maintenance or due to a fault.

“We try hard to alert our customers in advance to any issues, for example through real-time lift information on our website, and to provide up-to-date information at stations and on trains.

“However, it’s clear that some of the recent improvements we’ve made to keep customers up-to-date weren’t carried out properly in this case.”

A TfL spokesperson said London Underground had introduced a real-time information app for station staff which allows them to report lift faults, via their iPads, directly to the control centre.

It has also installed poster frames next to lifts in stations, and prints posters with key alternative routes “that can be quickly deployed in the event of a lift fault”.

She added: “We have also introduced an initiative at all step-free stations which involves distributing prompt cards to station staff to remind them of the actions to take when a lift goes out of service.”