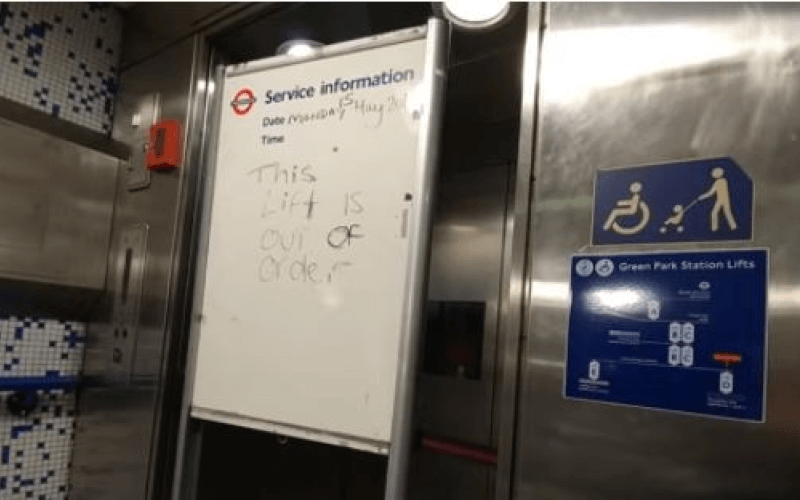 A court has found that London Underground twice discriminated against a disabled campaigner by failing to warn him that vital lifts that would allow him to complete his journey on the capital’s tube network were out-of-order.

Doug Paulley found himself stranded and confronted with inaccurate and incomplete information and unhelpful staff on trips to London in October 2016 and May 2017.

A district judge has now ruled that London Underground breached its duty to make reasonable adjustments for its disabled customers by failing to let Paulley know about lift closures on its network.

The judge ruled that it was not reasonable for London Underground to expect wheelchair-users and other passengers who rely on lifts to check the organisation’s website for closures before every journey they make.

London Underground will now have to do more to alert passengers when its lifts are out of order across the 12 stations with step-free access in the central zone, which should include placing white boards at station entrances to ensure passengers know about problems before they start their journey.

The judge said that such measures “would not in any way place an unreasonable burden on the defendant’s resources”.

He also made it clear that he knew Paulley was more interested in the principles he was fighting for than in securing damages from London Underground.

On the first occasion, Paulley had been hoping to travel to King’s Cross from Westminster tube station, but he was left confused by a sign informing him that one lift was out of order and directing him to another entrance.

When he reached that entrance, he found that lift was also out of order.

Seven months later, he was travelling to King’s Cross by tube to catch a rail connection but had not been told that a lift at the station was out of order (pictured).

After initially refusing to speak to him face-to-face or discuss other options other than catching another tube to retrace his journey, returning to the surface and catching a bus back to King’s Cross, London Underground staff eventually agreed to help Paulley up the escalator in his wheelchair.

Although Paulley was able to catch his train, the judge said he was “unimpressed by the handling of the incident” by London Underground, which had initially taken an “intransigent” attitude, increasing Paulley’s frustration and causing him “detriment and worry” until a solution was found.

It is not the first time that Paulley has succeeded with a legal bid to persuade London Underground to improve the information it provides to disabled passengers.

Six years ago, after settling another case out-of-court, London Underground promised to update more frequently its website and written guides which show which tube stations are accessible.

But Paulley says London Underground failed to do that.

He was critical this week of London Underground’s failure to settle his latest case out-of-court, which has now led to him being awarded £1,000 in damages by the judge for the King’s Cross incident and £800 for the Westminster incident.

He said the “sloppy lack of adherence” to procedures and standards designed to minimise disabled people’s inconvenience by London Underground staff had been “shameful and unacceptable”.

He said: “I am amazed and disturbed that London Underground would spend so long, and so much money, fighting to defend such behaviour.”

He said its staff had failed to follow “clear procedures” as to what they could and should do to warn disabled people about lift failures at two key step-free interchanges, Westminster and King’s Cross.

He said: “If they don’t follow them there, then what chance have we that they will follow them elsewhere?”

He added: “I very much hope that in future they adhere properly to suitable procedures for disseminating information and taking action when lifts break, such that other disabled people don’t go through what I did.”

Mark Evers, London Underground’s chief customer officer, said: “Making London’s transport network more accessible is one of our top priorities and we understand how challenging it can be for our customers when lifts are taken out of service, either for planned maintenance or due to a fault.

“We apologise to Mr Paulley for failing to provide him with the relevant information to carry out his journey.

“We try hard to alert our customers in advance to any issues, for example through real-time lift information on our website, and to provide up-to-date information at stations and on trains.

“We are also introducing an initiative at all step-free stations which involves distributing prompt cards to station staff to remind them of the actions to take when a lift goes out of service.

“However, we acknowledge that there’s more to do. We will be considering the county court’s ruling in relation to these cases.”

London Underground said it had introduced a real-time information app for station staff which allows them to report lift faults – via their iPads – directly to the control centre.

It is also installing “poster frames” next to lifts in these stations and printing posters with key alternative routes that can be quickly used if there is a lift fault, a system which should be introduced at all step-free stations by the spring.

The court victory is just the latest of a series of legal bids and other campaign actions taken by Paulley in a bid to push service-providers to improve the country’s inaccessible public transport network.

His most high-profile success came almost exactly two years ago, when the Supreme Court ruled that First Bus had breached its duty to make reasonable adjustments for disabled people under the Equality Act through its “first come, first served” policy on the use of wheelchair spaces.

But Paulley has also secured high-profile campaign successes after taking on providers across the coach, train and taxi network.

And only last week, Disability News Service reported how he revealed the inaccessibility of supposedly wheelchair-accessible coach services provided by National Express after taking nine journeys on the same day and experiencing significant problems on all but one of them.