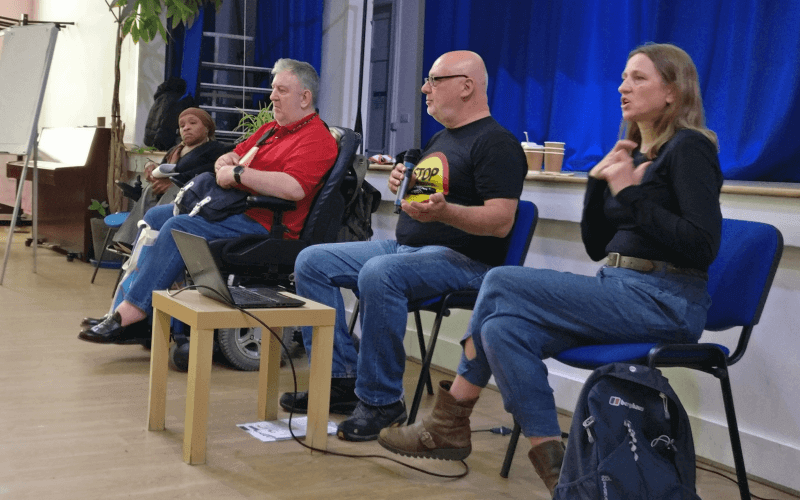 Frustrated disabled campaigners have expressed “massive disappointment” at Labour’s latest policy announcement on social care, after it failed again to commit to introducing a legal right to independent living if it wins power.

Jeremy Corbyn promised on Tuesday that a Labour government would introduce free personal care for older people in England – ensuring support for getting in and out of bed, dressing, eating and bathing – and would only “work towards” doing the same for working-age disabled people.

Corbyn criticised Boris Johnson for failing to set out in this week’s Queen’s speech any legislation on adult social care, or to provide details of any proposals or set a time limit for any reforms (see separate story).

And he said Labour’s plans would extend state-funded social care to hundreds of thousands more people.

But those plans fall far short of proposals for a National Independent Living Support Service (NILSS) for England, and a legal right to independent living, which were overwhelmingly backed by Labour members at the party’s annual conference in Brighton last month.

It came as the Care Quality Commission, in its annual assessment of the state of health and social care in England, warned that the “failure to find a consensus” for a future adult social care funding model “continues to drive instability in this sector” and said there was “an urgent need for Parliament and government to make this a priority”.

Fran Springfield, co-chair of Disability Labour, said she was “massively disappointed” that Labour did not seem committed to the NILSS proposals that had been backed by its own members.

She said Labour’s plans for a National Care Service “will not meet the needs of thousands of disabled people of all ages who want to live independently and have control over who provides that care and how it is delivered”.

Mark Harrison, of the Reclaiming Our Futures Alliance (ROFA), who helped draw up the NILSS plans, said Labour had failed to co-produce its proposals with disabled people and their representative organisations, as required by [article four of] the UN Convention on the Rights of Persons with Disabilities (UNCRPD).

He said: “If they had consulted disabled people and implemented the policy on independent living and social care passed at the recent conference and the TUC Congress in September, it would not look like this.

He said the party’s plans were also not in line with those proposed by the Equality and Human Rights Commission, which has called for a legal right to independent living.

Harrison (pictured, second from right, at a Labour fringe event) said: “We need the Labour front bench to take the UNCRPD seriously and work closely with representative disabled people’s organisations to develop a plan for achieving disability equality and addressing the last nine-and-a-half years of austerity cuts which have disproportionately hit disabled people and our families.”

Professor Peter Beresford, co-chair of Shaping Our Lives, who has written in support of ROFA’s “radical and transformational” NILSS plans, said: “First and most important, we have to hope that Labour’s early announcement about social care will not come to be seen as a lost opportunity, rather than a first response to broader extraordinary political circumstances.

“What we have to hope is that Labour will ultimately commit itself to an approach to future social care policy that is closely in line with achieving independent living as set out in the UNCRPD.

“This must be the goal, although we know that it may take time, but the UN convention recognises this and has introduced the concept of ‘progressive realisation’ knowing that while states cannot be expected to have all the resources in place in the short term they must have concrete steps in place towards it.

“The current announcement does not yet put us in this crucial place.”

Svetlana Kotova, director of campaigns and justice for Inclusion London, said her organisation was “disappointed” with Labour’s focus on personal care, rather than independent living.

She said: “Our lives are so much more than just being clean and fed.”

He said: “Whilst free personal care for older people is obviously welcomed, extending that right should and must be extended to all, including disabled people young and old.

“GMCDP believes we need a clear timescale and commitment from both the government and the opposition parties to consult on their social care plans.

“That means actively engaging with and listening to disabled people and our organisations.

“To be clear, what we need, what we demand, is that all political parties accept the need for legislation that enshrines disabled people’s universal right to independent living.

“Furthermore, just as health care is free at the point of delivery, so should social care.”

“They have been at the fringe events [at the party conference], they saw the protests.

“We are not invisible; they know the facts. The continued attacks on personal independence payment and social care are getting worse.

“Social care is a lifeline, it is our human right, our access to society. Labour need to get behind this as they have with other cuts to support.”

The Labour party had not been able to comment by noon today (Thursday).