You are here: Home / Politics / Eight-hour debate suggests House of Lords is split on assisted suicide 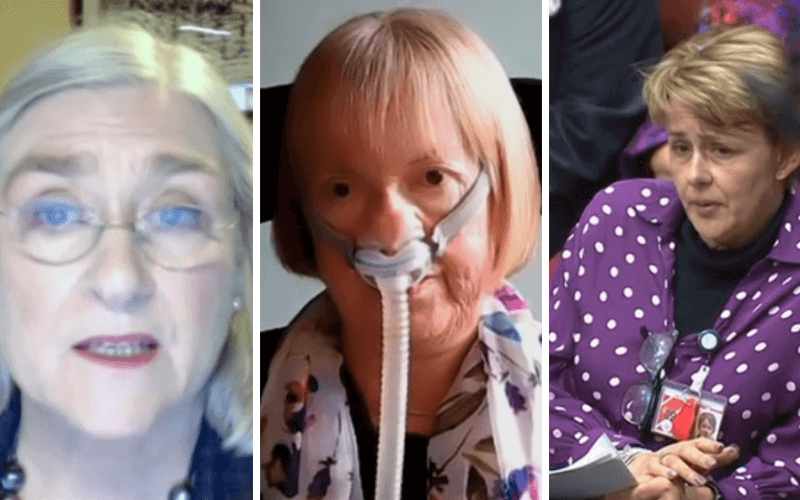 The chances of a bill that aims to legalise assisted suicide being passed by the House of Lords appear to be in the balance after nearly eight hours of debate among peers.

The organisation Dignity in Dying, which leads the campaign for legalisation, suggested afterwards that the debate showed the Lords “clearly recognises” that it is time for reform and that change was “inevitable”.

But analysis of the 130-plus speeches suggests instead that the number of peers who signalled support for the assisted dying bill during the debate was only slightly higher than the number who opposed it, despite months of campaigning from the well-funded pro-legalisation lobby.

Even if the bill is passed by the Lords, it will still need to be debated and approved by MPs.

Disability News Service analysis of the official Hansard account of the debate suggests that about 67 peers spoke in favour of the bill, and about 63 spoke against (including five whose opposition was announced by peers who spoke in the debate), with a handful who appeared undecided.

Exact figures are not possible because no vote was taken at the end of the bill’s second reading on Friday, while hundreds of peers did not take part in the debate.

The bill will now go forward to its committee stage, where it will receive detailed examination.

Among high-profile disabled peers, a majority spoke against the bill – including the crossbenchers Baroness [Jane] Campbell, Baroness Masham and Baroness [Tanni] Grey-Thompson – although Lord [Colin] Low spoke in favour, as did the former Liberal Democrat president Baroness [Sal] Brinton, who has co-sponsored the bill.

The bill would give terminally-ill and “mentally competent” adults with less than six months to live “the right to choose the manner and timing of their death”.

Baroness Campbell, who has led disabled people’s opposition to the bill for many years as founder of Not Dead Yet UK, told fellow peers that there must be “true choice” for everyone at the end of life before the “ultimate step” of assisted suicide could be considered.

She said: “I am not immune to dark thoughts when my health deteriorates and social care fails, or when I am told that I am at end of life and I am in pain – but my experience has taught me that universal patient-centred care is and has to be the first priority.”

She added: “The bill would alter society’s view of those in vulnerable circumstances by signalling to the sick that an assisted suicide is something that they might or ought to consider.

“It will result in unintended, dangerous consequences, and we all know, from other jurisdictions where similar legislation exists, that it is simply not true to say that this does not happen.”

Baroness [Tanni] Grey-Thompson said that many people had told her: “If my life was like yours, I would kill myself.”

She said: “I have a huge amount of privilege in my life, but if people think this, it becomes very easy for them to conflate disability and a six-month diagnosis, and decide that we have no right to live.”

And she added: “I believe it is fundamentally wrong to have assisted dying on the NHS when there is no right to palliative care.”

Another disabled crossbencher, Baroness Masham, said the bill had “put fear into thousands of vulnerable people who are elderly or disabled”.

She said: “Lifting the lid off lethal, poisonous drugs is frightening and dangerous.

“I have had hundreds of emails and letters from very worried people.

“They are right in thinking that vulnerable people will be pressurised into thinking that they are a burden, especially now, when there is an extreme shortage of people to care for elderly and disabled people.”

Lord Shinkwin, a disabled Tory peer, described how he had been left unable to talk, swallow or breathe independently after lifesaving neurosurgery.

He said: “My neurosurgeon would not give me odds even on survival, never mind recovery.

“To say that I felt vulnerable would be an understatement.

“However, the one thing that did not compound my pain, anguish and complete loss of autonomy was the fear that the law presumed to pose the question of whether my life was worth living.”

He said that, if the assisted dying bill had been law, it would have “compounded” his “acute sense of vulnerability”.

He added: “There is no doubt in my mind that I would have felt like a burden.”

Two prominent disabled peers spoke in favour of the bill.

Lord Low, former chair of RNIB and still one of the charity’s vice-presidents, said that other lawmakers around the world had “recognised that banning assisted dying is both dangerous and cruel”.

He said: “Opposing assisted dying because of speculative concerns about how safe or unsafe it might be is hypocritical when we look at the lack of protections around current end-of-life choices.

“We are told that the licensing of assisted dying is a particular threat to disabled people, but there is far more potential for abuse and harm towards disabled people under current arrangements than there would be under a robust assisted dying law – for example, through outsourcing the problem to Dignitas, or doctors making end-of-life decisions without robust safeguards, transparency or oversight.”

She said: “If we are serious about the risks to vulnerable people, we must accept that, under existing law, a hypothetical bad relation could encourage an elderly or disabled person to bring their life to an end.

“There are far fewer safeguards on, for instance, withdrawal of treatment, ‘Do not attempt resuscitation’ orders, or voluntarily stopping eating and drinking, in comparison to the safeguards provided in the bill, where the decision is in the hands of the individual, not other people.”

She added: “The many personal stories told today add to the clear evidence that the blanket ban on assisted dying is dangerous and cruel.

“I believe the bill proposes a robust, safe and compassionate alternative.”

The Labour peer Lord Campbell-Savours described his 40 years of ill-health and “escalating pain” that had now left him “physically diminished but in good spirits”.

He said suicide had never crossed his mind, but he understood “the dilemma of those who want out with dignity, particularly in their last weeks and months” because there are “circumstances in which the pain could become unbearable”.

But he said: “My concern is that, while I can trust those close to me in such circumstances to act in my best interests, a relaxation in the law could lead to the abuse of others whose families are not so well disposed.”

He added: “If we cannot establish adequate safeguards in committee, then I shall vote against; if we can, then I shall support the bill.”

Meanwhile, despite repeated dismissal by the pro-legalisation lobby of the arguments made by disabled campaigners in the past months and years, comments by some of those supporting the bill suggest that some at least of their concerns are well-founded.

The Conservative peer, Lord Vinson, who supports the bill, appeared to accept that there would be “abuse” of the bill if it became law – which is likely to mean disabled people dying when they do not actually want to do so.

He told fellow peers: “Yes, I accept that there are occasions when any bill or piece of legislation will be abused – nothing is watertight – but we should not so entangle the law with safeguards, to prevent some perceived abuse, to the extent that it frustrates the deeply needed reform that the bill calls for.”

Another supporter, the crossbencher Lord Aberdare, appeared to accept another of the key concerns of those opposed to the bill – that people will request an assisted suicide because they do not want to be a “burden” on family or society.

He said that “not wishing to be a burden to one’s loved ones in one’s dying days seems to me a perfectly respectable consideration for a dying person to take into account”.