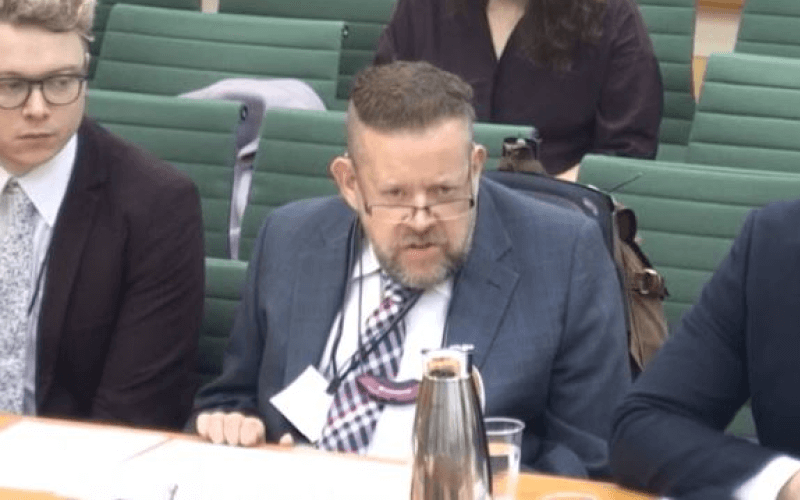 The equality watchdog should be given greater powers that would allow it to take more legal cases against organisations that breach the Equality Act, a disabled former commissioner has told MPs.

Mike Smith, who chaired the disability committee of the Equality and Human Rights Commission (EHRC) between 2009 and 2012, told the Commons women and equalities committee that it was impossible for many people to take legal action to enforce their rights under the Equality Act 2010.

Smith (pictured, centre), who is now chief executive of the disabled people’s organisation Real, said: “For many disabled people it’s de facto impossible to achieve justice in many areas.”

He said this particularly applied to cases alleging discrimination under the act by service-providers.

He and other equality experts who gave evidence to the committee yesterday (Wednesday), as part of its inquiry into how the EHRC is enforcing the act, said the commission needed to be able to take far more legal cases.

Smith said the EHRC should be allowed to take cases in its own name on behalf of claimants, which would allow legal action from individuals who “just didn’t have the life circumstances or the capacity” to do that themselves.

He also suggested that the commission should be allowed to support class actions on behalf of multiple claimants, and that enforcement of the Equality Act should be amended so people could bring cases before the small claims court, which in England and Wales allows claims of up to £10,000.

He said this could “allow a much deeper range of challenge to the kind of pervasive inequality and disadvantage that people often experience”.

He said the risk of service-providers “getting caught” for breaching the Equality Act was “pretty low”.

He said: “I don’t think most organisations think that there is much risk associated with breaking the Equality Act, either in terms of reputation or the financial consequences.”

Smith contrasted this with the US, and its Americans with Disabilities Act, where courts produce far higher levels of damages.

He said: “Any time I go to the States I am always amazed at how much more effective the manifestation of the legislation is.

“Maybe we need to look harder at how there are consequences for organisations for breaking the law in the first place and that might sharpen their minds.”

Smith also told the committee that the EHRC should find a way to hold the government to account on its failure to implement the UN Convention on the Rights of Persons with Disabilities.

He believes the failure to realise rights in the convention is as big an issue – if not bigger – for disabled people as discrimination.

But he told the committee that the commission had changed the lives of many disabled people with legal action it had taken recently, including forcing 13 NHS clinical commissioning groups to withdraw unlawful, discriminatory policies that could have seen service-users with complex healthcare needs forced into institutions.

He also praised its support for a significant legal case which saw the high court rule last year that disability benefit rules were unlawful and “blatantly discriminatory” to people with mental distress.

Niall Crowley, an equality and human rights expert and former chief executive of Ireland’s Equality Authority, told the committee that the EHRC was one of two equality bodies across the European Union (the other is Poland) that had suffered “disproportionate” cuts in funding, cuts which he said have “a hugely chilling effect on the work of equality bodies”.

He said such cuts are “particularly damaging” to the efforts of such bodies to enforce equality legislation.

Crowley was also critical of the commission’s policy of “strategic litigation”, taking only high-profile legal actions.

He said: “If you pursue a strategic litigation strategy that is purely about high-profile, precedent-setting cases you get greater clarity about the law but you don’t get a culture of compliance.”

He said equality bodies like the EHRC needed to take a “critical mass of cases” across the areas covered by equality laws.

Barbara Cohen, a discrimination law consultant and former head of legal policy at the Commission for Racial Equality, told MPs that the EHRC needed to be more of an “enforcer”.

She said it needed to do more to advertise its legal successes and create a “sense of fear”.

She said: “Just beginning to shout, ‘We are the big bad wolf and we are coming for you,’ just hasn’t happened… people are not frightened of the EHRC.”

Nick Webster, a senior solicitor at lawyers Leigh Day, said the government’s decision to remove the commission’s conciliation and mediation powers had not been helpful.

He suggested that these powers should be returned, while the commission should also be given new powers to act as an ombudsman.

This would mean that employers would know they do not have to just deal with a tribunal, the employee taking the case against then, and their union, but also with “a government body that is potentially going to come and look at what they are doing and issue fines as necessary”.

“That’s because they can just deal with that issue… and move on.”

But if employers know that losing a discrimination case “isn’t the end of it” and that they could face further action from the EHRC, they could be forced to make significant changes to how their organisations operate, he said.